During a Wednesday press conference, press secretary Karine Jean-Pierre claimed "the tweet was not complete" and urged people to not forget about "MAGA Republicans" threatening benefits. 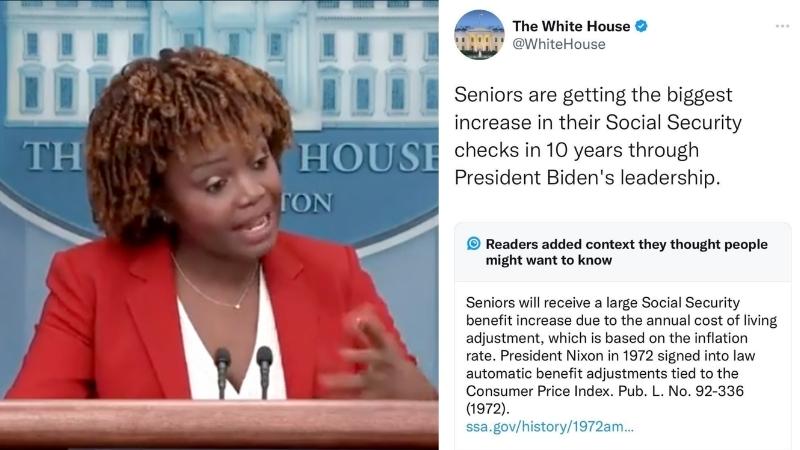 Olivia Rondeau
Nov 2, 2022 minute read
ADVERTISEMENT
ADVERTISEMENT
The White House on Wednesday deleted a tweet that claimed an increase in Social Security payments was due to "President Biden’s leadership" after being fact-checked by Twitter as something that was actually occurring because of inflation.

During a campaign stop on Tuesday in Florida President Joe Biden took credit for the increase in a "gaffe-filled speech," according to Newsweek.

"And on my watch, for the first time in 10 years, seniors are getting an increase in their Social Security checks," the president said. "So, checks are going to be up and Medicare payments are going to be down."

The same day, the White House echoed that sentiment.

"Seniors are getting the biggest increase in their Social Security checks in 10 years through President Biden's leadership," the official White House account posted. Twitter attached a context disclaimer to the tweet, saying that the true cause of the higher payments is "due to the annual cost of living adjustment, which is based on the inflation rate."

Twitter's new "Birdwatch" function adds "context" notes when they are rated highly enough by users, something that the platform's new owner, Elon Musk, is proud of.

"The community notes feature is awesome. Our goal is to make Twitter the most accurate source of information on Earth, without regard to political affiliation," Musk said of the fact-check.

Soon after they deleted the tweet, a White House official told Fox News that it was taken down because "the point was incomplete."

During a Wednesday press conference, press secretary Karine Jean-Pierre reiterated that point, claiming "the tweet was not complete" and urged people to not forget about "MAGA Republicans" threatening benefits.

According to Fox News, Social Security benefits will be raised by 8.7 percent next year due to the 40-year record inflation. The increase will be the largest cost-of-living adjustment (COLA) since 1981.
ADVERTISEMENT
ADVERTISEMENT
kjp deleted tweet