Once reports of CBS News' hiatus made their way to Twitter, Musk asked "Who made this decision?", followed up by "Oh forget it who cares." 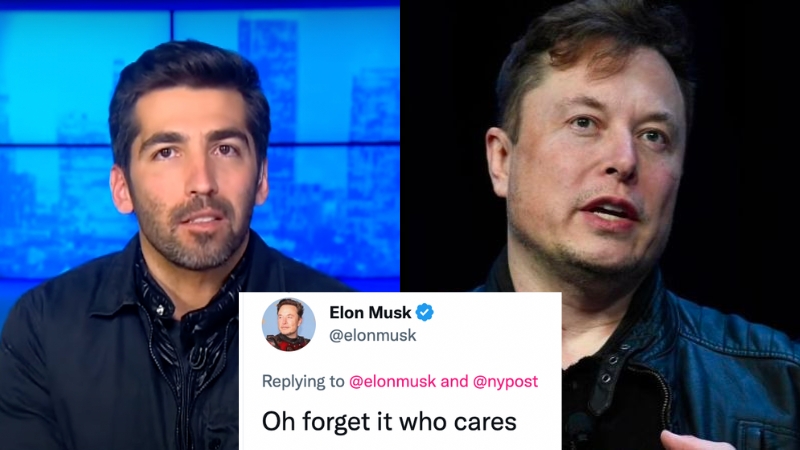 In a segment surrounding "Turmoil" at Twitter, national correspondent Jonathan Vigliotti said, "Tonight, as questions mount over Twitter's future, Elon Musk offers little reassurance he has a permanent plan, tweeting, 'What should Twitter do next?'"

The report included a quote from a former Twitter engineer who Musk fired, who claimed that the workplace culture after the Tesla CEO took over the social media site last month was one "of fear and uncertainty, of anxiety."

Seemingly in the middle of the segment, Vigliotti announced CBS's decision to go on a Twitter hiatus.

"In light of the uncertainty around Twitter, and out of an abundance of caution, CBS News is pausing its activity on the social media site as it continues to monitor the platform," he said.

Once reports of the news made their way to Twitter, Musk asked "Who made this decision?", followed up by "Oh forget it who cares."

"After pausing for much of the weekend to assess the security concerns, CBS News and Stations is resuming its activity on Twitter as we continue to monitor the situation," they tweeted.

"I don’t get it. News organizations go to war zones and Category 5 hurricanes," wrote author Christina Sommers. "Yet CBS is frighted by Twitter?"

Podcast host Siraj Hasmi also slammed the move, highlighting the hypocrisy of not leaving Twitter over the amount of explicit child sexual abuse content shared on the platform, but over Musk.

"CBS News had no issue with the sharing of child sexual abuse materials on Twitter, yet 'paused' posting on this website for 21 hours over 'security concerns' (i.e. Elon Musk's 'Trump reinstatement' poll)," tweeted Hashmi.

On Saturday, Musk upset the far-left with his announcement that former president Donald Trump's account was being unbanned, following a poll in which over 15 million users voted on whether or not to reinstate his page. With a 51.8 percent to 48.2 percent margin, Trump came out on top.

"Vox Populi, Vox Dei," Musk wrote, a Latin phrase meaning "the voice of the people is the voice of God," after the results were in. The 2024 presidential candidate's account appeared to have been put up again last night.

In another swipe at establishment media, Musk hit back at the New York Times' disapproval of Trump. In response to a Substack post by Matt Taibbi on the Times' latest anti-Trump piece, "America Deserves Better Than Donald Trump," Musk called the publication "far left brainwashing."

"It is tragic how far The New York Times has fallen – basically just boring af far left brainwashing at this point. The boring part is truly unforgivable!" the Twitter owner wrote.

"If there was anything Trump was right about it was about the 'formerly brilliant' NYT becoming 'fake news," he wrote. "The coverage of certain topics is so blatantly one-sided but they continue to masquerade as being fair and unprejudiced. Also yeah it is boring to read. Dry lies."

Musk posted a meme on Sunday from the film Brokeback Mountain writing "Our live will never die" showing himself and CBS in an embrace with CBS saying, "Why can't I quit you."