In order to "counter domestic terrorism," the Biden administration is proposing that Americans inform on family, friends, and co-workers who are "perceived to be radicalizing and potentially radicalizing towards violence." 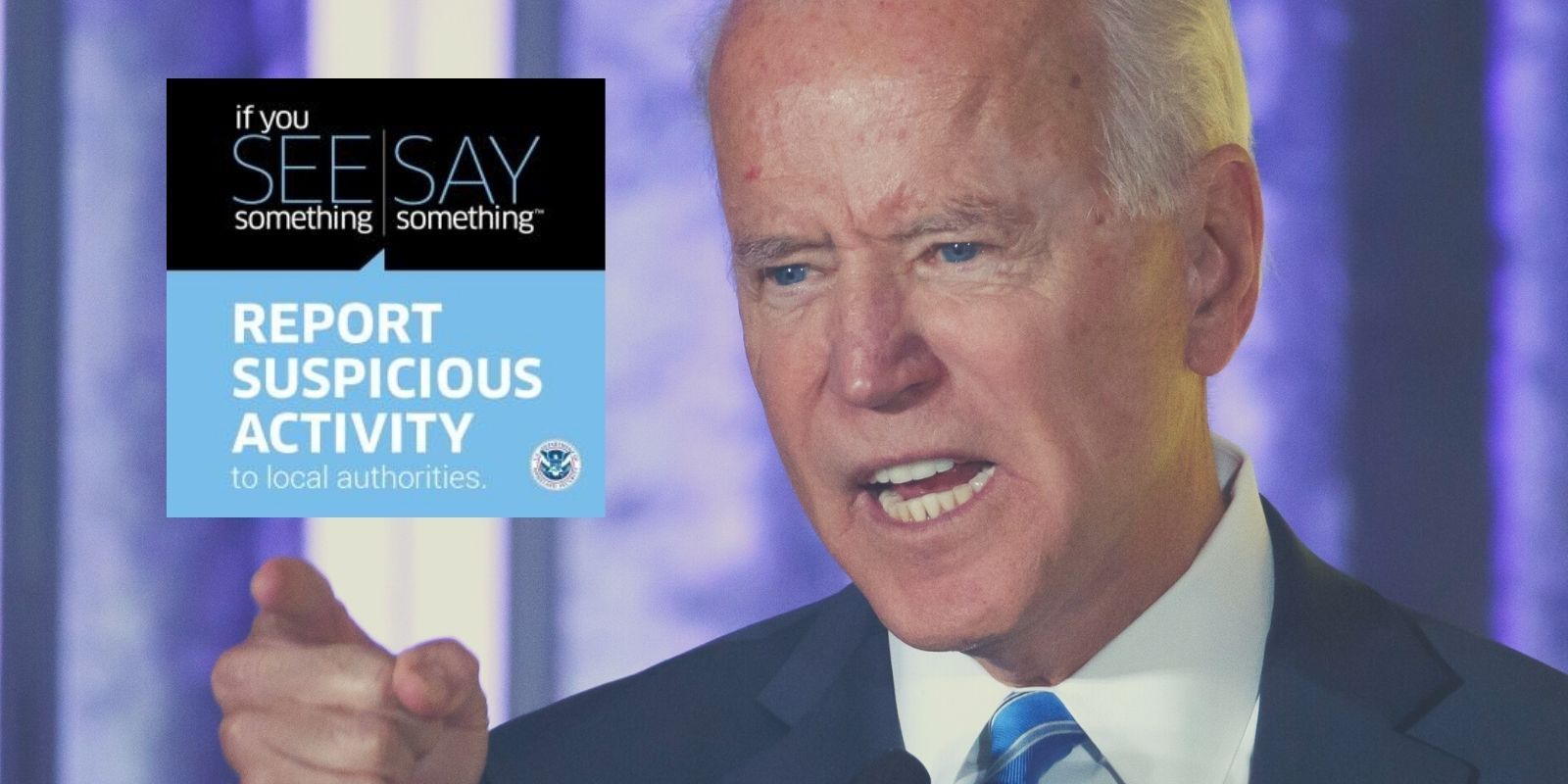 In order to "counter domestic terrorism," the Biden administration is proposing that Americans inform on family, friends, and co-workers who are "perceived to be radicalizing and potentially radicalizing towards violence."

According to Tuesday's press briefing, senior Biden administration officials discussed via teleconference the national strategy to combat terrorism in the United States ahead of the effort's release to the public.

The Department of Defense is incorporating training for service members separating or retiring from the military, who may "potentially be targeted by those who seek to radicalize them," a senior official said on the press call.

The administration will also "work to improve public awareness of federal resources to address concerning or threatening behavior before violence occurs," the official said, noting that one of the proposals the White House has been discussing is "the need to do something in this space..."

"If you see something, say something" concept has been promulgated before by the Department of Homeland Security, the official continued. The national campaign "raises public awareness of the indicators of terrorism and terrorism-related crime, as well as the importance of reporting suspicious activity to state and local law enforcement," the Homeland Security Department described online.

The senior Biden official characterized the practice as "creating contexts in which those who are family members or friends or co-workers know that there are pathways and avenues to raise concerns and seek help for those who they have perceived to be radicalizing and potentially radicalizing towards violence."

While the phrase "potentially" employed by the Biden administration implies that certain legal political speech has the "potential" to incite violence, the White House also mentioned "increased information sharing" between Big Tech platforms to help combat the purported potential for radicalization.

"Any particular tech company often knows its own platform very well," the official said, pivoting to emphasize that government officials "see the relationship between online recruitment, radicalization, and violence in the physical world."

One of the principal tools now at the administration's disposal is the White House's decision to join the Christchurch Call to Action to Eliminate Terrorist and Violent Extremist Content Online, "an international partnership between governments and technology companies that works to develop new solutions to eliminating terrorist content online while safeguarding the freedom of online expression." The previous Trump administration had decided against participation in the endeavor, the Biden official noted, while the new presidency decided to collaborate with countries that share the current White House's postured values as well as the private sector "in countering these pernicious developments in which online platforms are used to promote radicalization and violence."

President Joe Biden spoke on the centenary anniversary of the Tulsa Race Massacre to commemorate the atrocities committed and to make sure that the nation doesn't forget what happened in 1921. In the president's remarks, he took the opportunity to note that "according to the intelligence community, terrorism from white supremacy is the most lethal threat to the homeland today."

Attorney General Merrick Garland said Tuesday that according to the FBI, white supremacists are the "top domestic violent extremist threat" to the United States.

Domestic terrorism is an official top priority now for the United States attorney's officials and FBI field offices across the country, the press briefing indicated.

Authorities are reallocating or requesting funding as needed to target the domestic terrorism threat, which includes over $100 million in additional resources for the Department of Justice, the FBI, and the Department of Homeland Security that are included in Biden's fiscal year 2022 budget to ensure that law enforcement has the analysts, investigators, prosecutors, and other personnel, and resources necessary to "thwart domestic terrorism and bring domestic terrorists to justice when the law has been broken," the briefing cited. State, local, tribal, and territorial law enforcement will have access to increased intelligence sharing and training on domestic terrorism and associated threats, the press call reported.

"Within the federal government, we have a special responsibility to ensure that we address the possibility of insider threats, especially among those who have the opportunity to be working in law enforcement or in the military," the Biden official said. The Office of Personnel Management will consider updates to the forms used to apply for sensitive roles in the federal government that could assist investigators in identifying potential domestic terrorism threats, the senior official noted.

Before he was sworn in, Biden preached "national unity" on the campaign trail and in the aftermath of the 2020 presidential elections. "Without unity there is no peace only bitterness and fury, no progress," Biden said in his inaugural speech. "This is our historic moment of crisis and challenge and unity is the path forward."

Biden ended his first presidential address with rhetorical flourishes about the need for "hope not fear, unity not division, hope not darkness" as well as "greatness and goodness." Millions of Trump's supporters have since been alienated across America amid the crackdown and anyone right of center declared the enemy.