"We've got to recognize that our technology platforms, whether particularly social media, these have an important role to play... These platforms have still not stepped up to do the right thing." 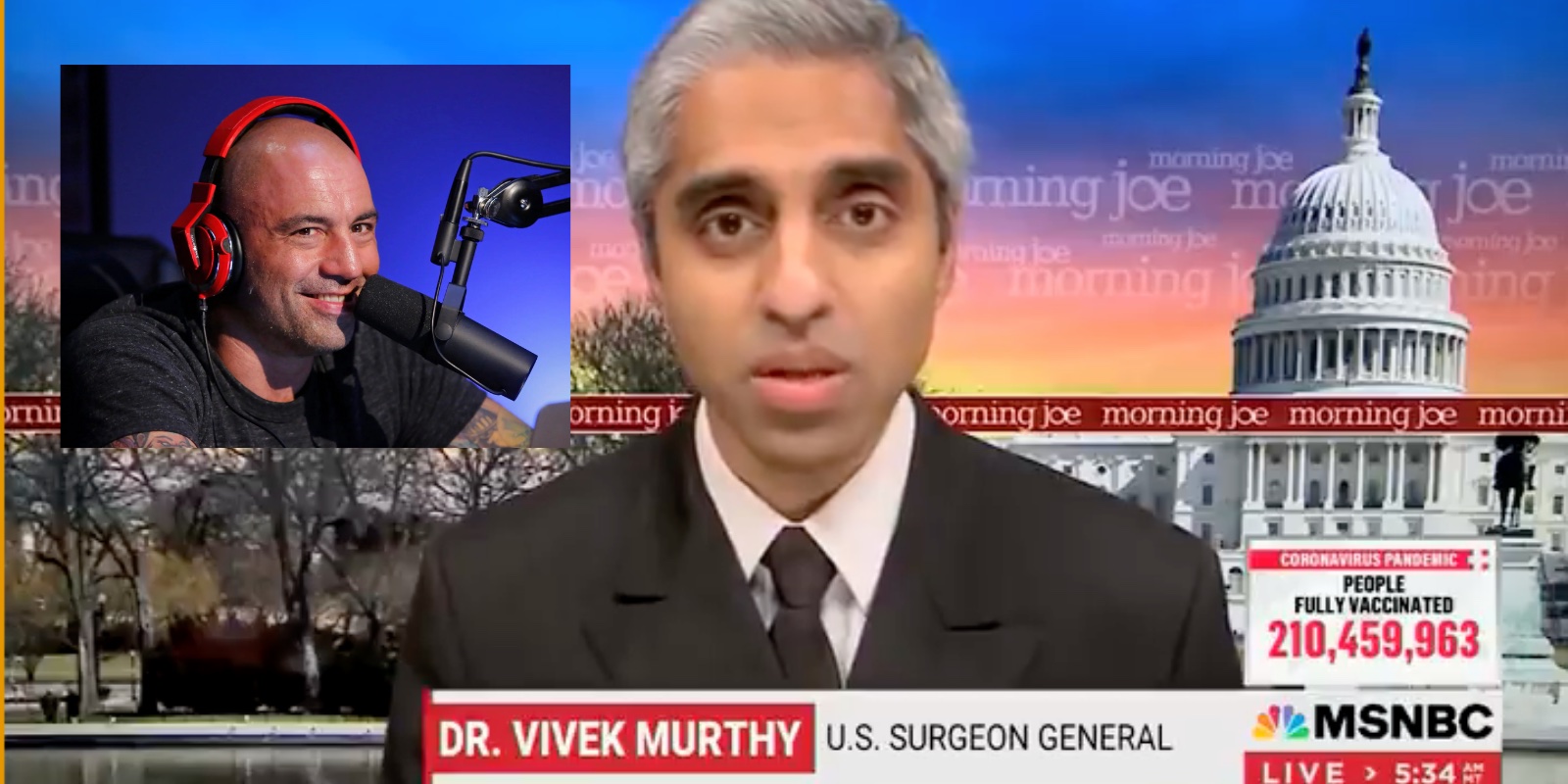 Biden's Surgeon General Vivek Murthy came out against Joe Rogan and his podcast on Tuesday in a segment with MSNBC. When asked by Mika Brzezinski about The Joe Rogan Experience, which has featured interviews with noted doctors Robert Malone and Peter McCullough, Murthy was unequivocally opposed to Rogan's being platformed on streaming service Spotify.

"Rogan, who hosts the Joe Rogan Experience podcast, has frequently promoted unproven methods for treating COVID-19," Brzezinski began, "and downplayed the need for vaccines. Last year, Spotify purchased his podcast library for an estimated $100 million. Dr. Murthy, what do you think are the best ways to push back on misinformation about COVID that continues to be aggressively pushed whether it be Joe Rogan's podcast or all over Facebook?"

In July, Murthy also called for social media companies to censor what he termed misinformation on COVID. "Misinformation tends to flourish in environments of significant societal division, animosity, and distrust," Murthy said at the time. "Distrust of the health care system due to experiences with racism and other inequities may make it easier for misinformation to spread in some communities. Growing polarization, including in the political sphere, may also contribute to the spread of misinformation."

Murthy went on to explain his position to Brzezinski, saying "There's something I've always believed as a doctor, that people have the right to make their own decisions. They also have the right to have accurate information to make that decision with.

"Now when it comes to how we root out the misinformation in society right now, and give people access to accurate information, we've got to do several things. Number one, we've got to recognize that our technology platforms, whether particularly social media, these have an important role to play. These are the predominant places where we're seeing misinformation spread," he went on."

"These platforms have still not stepped up to do the right thing and do enough, I should say, to reduce the spread of misinformation," Murthy said.

"But each of us also has a role to play here," he went on, "because we all have platforms and particularly if you're somebody who has a large following, whether you're an entertainer, a politician, in the media, it's your responsibility, all of our responsibilities, to make sure that we are thoughtful in what we are sharing.

"This is not just about entertainment, it's not just about garnering clicks. This is about people's lives. And we have seen time and time again that misinformation costs people their lives.

"So you know we all have— this is not just about what government can do— this is about companies and individuals recognizing that the only way we get past misinformation is if we are careful about what we say and we use the power that we have to limit the spread of that misinformation. That's going to be a critical part of how we get through this pandemic," Murthy concluded.

YouTube removed the interview Rogan had with Dr. Robert Malone, and nearly 1,000 people, some of whom are doctors and scientists, have insisted that Spotify implement stricter content controls so that people like Rogan cannot have interviews that question the administration's narrative on COVID.