"We knew that our time here was limited, as big tech openly protects child predators. It really is wild though that Twitter banned an LGBT organization. The absolute state of 2022." 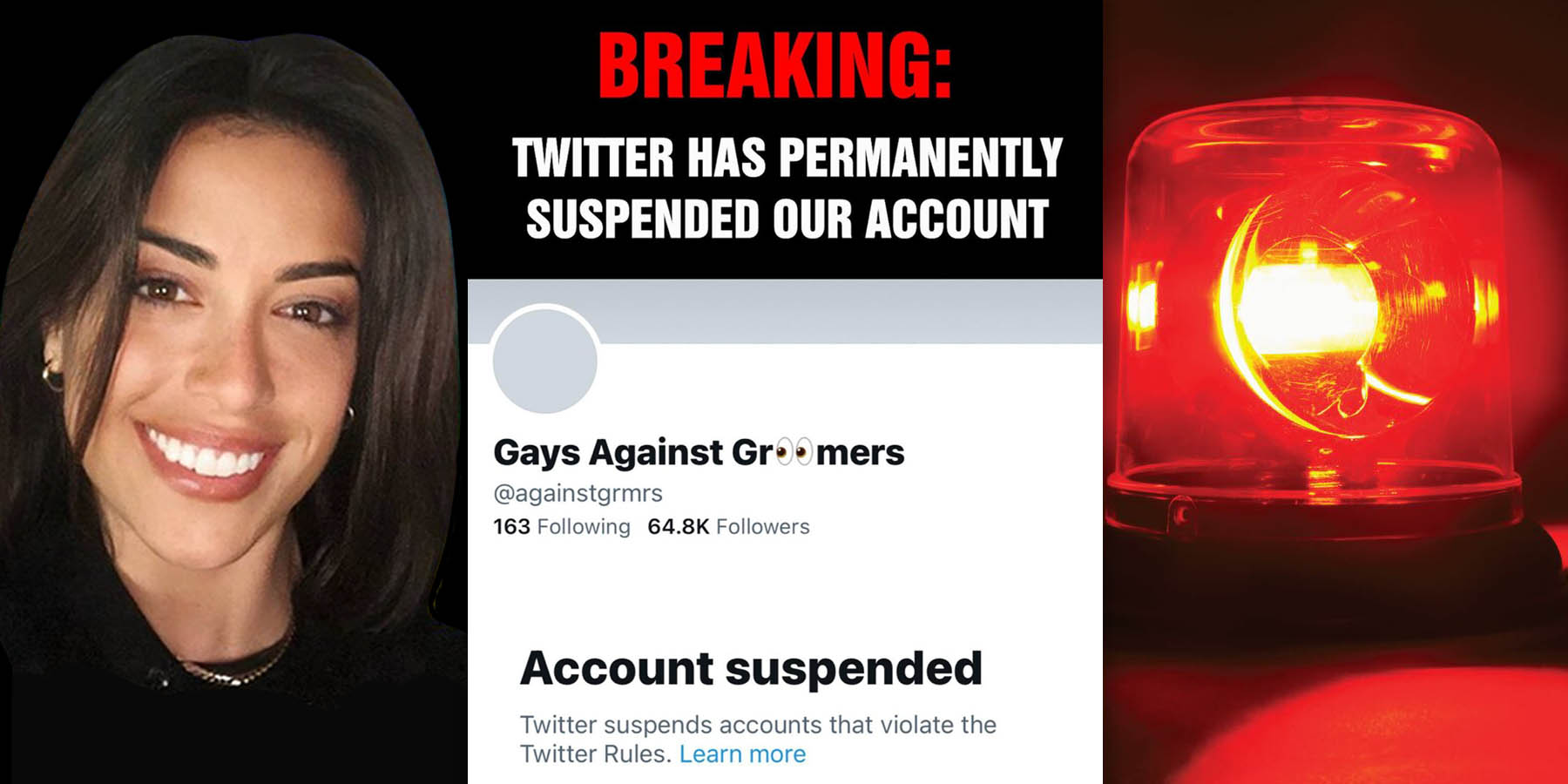 Update: On Wednesday evening, the @againstgrmrs account was quietly restored to Twitter: "As far as we know, our account was permanently suspended by Twitter this morning. We weren’t given a reason as to why or even notified about it. Radical activists were celebrating it being permanent as well. We filed an appeal but haven’t heard anything further. Very confused," the organization tweeted.

Gays Against Groomers, who describe themselves as "A coalition of gays against the sexualization and indoctrination of children," is the latest account challenging the predominant leftist narrative to be permanently banned from Twitter on Wednesday morning. This comes less than two weeks after Dr. James Lindsay, a math PhD known in part for the infamous "Grievance Studies Affair" that exposed frivolous scholarship within university humanities departments, was permanently banned from Twitter as well.

Twitter is cracking down on the use of the word "groomer" after pressure from activists who inaccurately claim the term is "anti-LGBT."  Twitter has come under intense pressure to follow in the footsteps of Reddit and other platforms, who have recently banned the term. Gays Against Groomers is the latest account to be affected by Twitter’s new policy.

Gays Against Groomers, which launched in June, has had meteoric success at attracting followers to their cause exposing harmful ideologies perpetuated by activists. Jaimee Michell, who founded the popular account, posted to the Gays Against Groomers Instagram page a screenshot of the suspended account on Wednesday morning with the message, "Twitter has permanently suspended our account. Please go to our website in our bio to find everywhere else you can follow us, ways to support us, and sign up for our newsletter to stay connected."

On their back up Twitter account, Gays Against Groomers, shared a message following the news, "We created this account the same day we made our main one in June. We knew that our time here was limited, as big tech openly protects child predators. It really is wild though that Twitter banned an LGBT organization. The absolute state of 2022."

Less than a month ago, on July 28, Gays Against Groomers received a temporary suspension for what Twitter said, violated their rules against "hateful conduct." The tweet, Michell said, was posted weeks ago, but she believes activists targeting her page have relentlessly reported her content.

"It’s very alarming and sad that our group, which is comprised solely of members of the LGBT community, has been silenced by Twitter in an apparent attempt to protect those seeking to harm children and push their radical agenda on them," Michell told the Post Millennial.

"These activists are the ones setting our community back by miles. Decades of fighting for equality under the law is being undone by them in just a matter of  months, and we are trying to reverse that and reclaim our good standing in society. The LGBTQ community is not a monolith. Those pushing and defending this ideology do not represent the vast majority of us, and we should be given a platform to say so."

The left asserts that the use of the word "groomer" is an anti-gay slur. Activist Mia Gingerick of Media Matters says that those who use it are participating in a "targeted hate campaign," and without a shred of evidence, asserts it drives a "nationwide harassment and violence against members of the LGBTQ community and their allies."

But the term "groomer" has two meanings, a distinction that Twitter does not seem to care about. While it is sometimes used to describe the process of adults initiating a sexual or predatory relationship with minors, more recently it has been used to describe the process of indoctrinating naive children into cultish ideologies. Specifically, gender ideology, the belief system based on the falsehood that whether someone is a man, boy, woman, or girl has nothing to do with one’s biology, but instead is determined by one’s subjective and undefinable "gender identity."

The left’s latest campaign to silence their opposition is by rebranding the word "groomer" as a targeted smear campaign against LGBT people and banning anyone from using it, similarly to how they rebranded Florida's Parental Rights in Education Act as the "Don’t Say Gay" bill.