"It's time now. If you don't want to get vaccinated, you'll be put on unpaid leave," Mayor Bill de Blasio threatened. 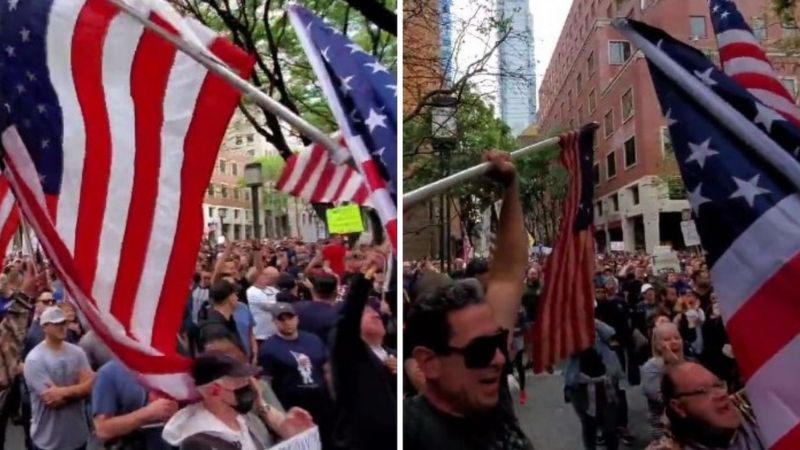 NYC municipal employees, including fire, police, EMS, and other city workers, marched in protest of the city's COVID-19 restrictions. Protesters took to the streets, waving the American flag while donning patriot-themed attire.

The large-scale demonstration shut down traffic on the Brooklyn Bridge into Manhattan as of 11:49 am, according to authorities. An advisory issued by the New York Police Department announced that due to the protest activity in the area, the bridge will be closed to vehicular traffic until further notice.

The protest, which is slated to end in front of City Hall on the Manhattan side of the bridge, is billed as an anti-vaccine mandate protest on behalf of nearly 50,000 city employees who have yet to be vaccinated with a deadline just days away.

All city workers must have received the first shot of the COVID-19 vaccine by 5 pm Friday to be allowed to return to work the morning of Nov. 1, according to PIX11.

Monday's protest follows a chaotic demonstration on Sunday night when protesters tried to storm the Barclays Center in support of Brooklyn Nets player Kyrie Irving, who is suspended by the franchise until he gets vaccinated.

The team lost the home opener to the Charlotte Hornets without the Nets point guard. Supporters protested the move ahead of the game and clashed with security, demanding that Irving be allowed to play, despite the vaccine rules.

Thousands of public workers citywide could also be punished if they're not jabbed by the end of the week. Any city employee who does not comply with the vaccine mandate will be placed on unpaid leave, and there is no testing option.

"It's time now. If you don't want to get vaccinated, you'll be put on unpaid leave," de Blasio threatened the city's workforce. "Well, the vast majority of human beings go to work to get paid. And also, I think for a lot of our first responders, there's a calling. They believe in the work, they care about the work."