"The full extent of the layoffs is not yet known. In May CNN CEO Chris Licht told staff he did not plan on making large staff cuts," an anonymous CNN source said. 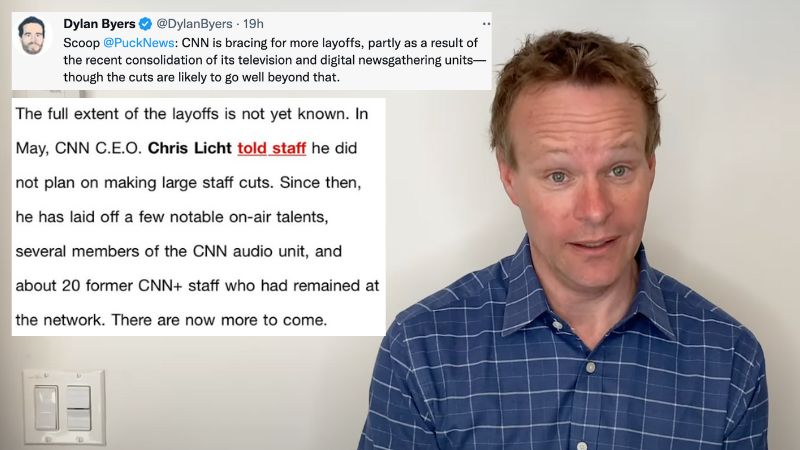 CNN is expected to layoff more employees after a round of layoffs in September, and the firing or demotion of several high-profile contributors such as Brian Stelter and Don Lemon.

According to Dylan Byers, the Founding Partner and Senior Correspondent at Puck News, "CNN is bracing for more layoffs, partly as a result of the recent consolidation of its television and digital newsgathering units—though the cuts are likely to go well beyond that."

An anonymous CNN source told Byers, "The full extent of the layoffs is not yet known. In May CNN CEO Chris Licht told staff he did not plan on making large staff cuts. Since then he has laid off a few notable on-air talents, several members of the CNN audio unit, and about 20 former CNN+ staff who had remained at the network. There are now more to come."

The New York Post reported in September that CNN "continued to clean house" with layoffs and focused on their podcast division.

CNN has attempted to embrace a "middle ground" vision of reporting since Chris Licht took over as CNN president in February after disgraced former boss Jeff Zucker was ousted due to a salacious affair scandal. Licht said in June that he wanted to reduce the partisan nature of some of the network's programming and on-air personalities.

Lickt promised to prune the network in order to reduce its partisanship.

CNN has been plagued with consistent low viewership ratings in recent months. Earlier in August, reports emerged that the network was on the "hunt for new revenue" as their ratings plummeted. Their profits have slumped steeply since 2016, reflecting the energy the channel poured into reporting on former President Donald Trump.

CNN aired the final episode of "Reliable Sources with Brian Stelter" in August, then fired the hosts. Don Lemon was subsequently demoted from his prime slot to a morning show. Earlier in October, reports emerged that Jim Acosta was set to be fired in upcoming weeks.
ADVERTISEMENT
ADVERTISEMENT
CNNLayoffs