One of the RCMP members laughed off the trampling incident, stating they've "watched that horse video," calling it "awesome," and that "we should practice that manoeuvre." 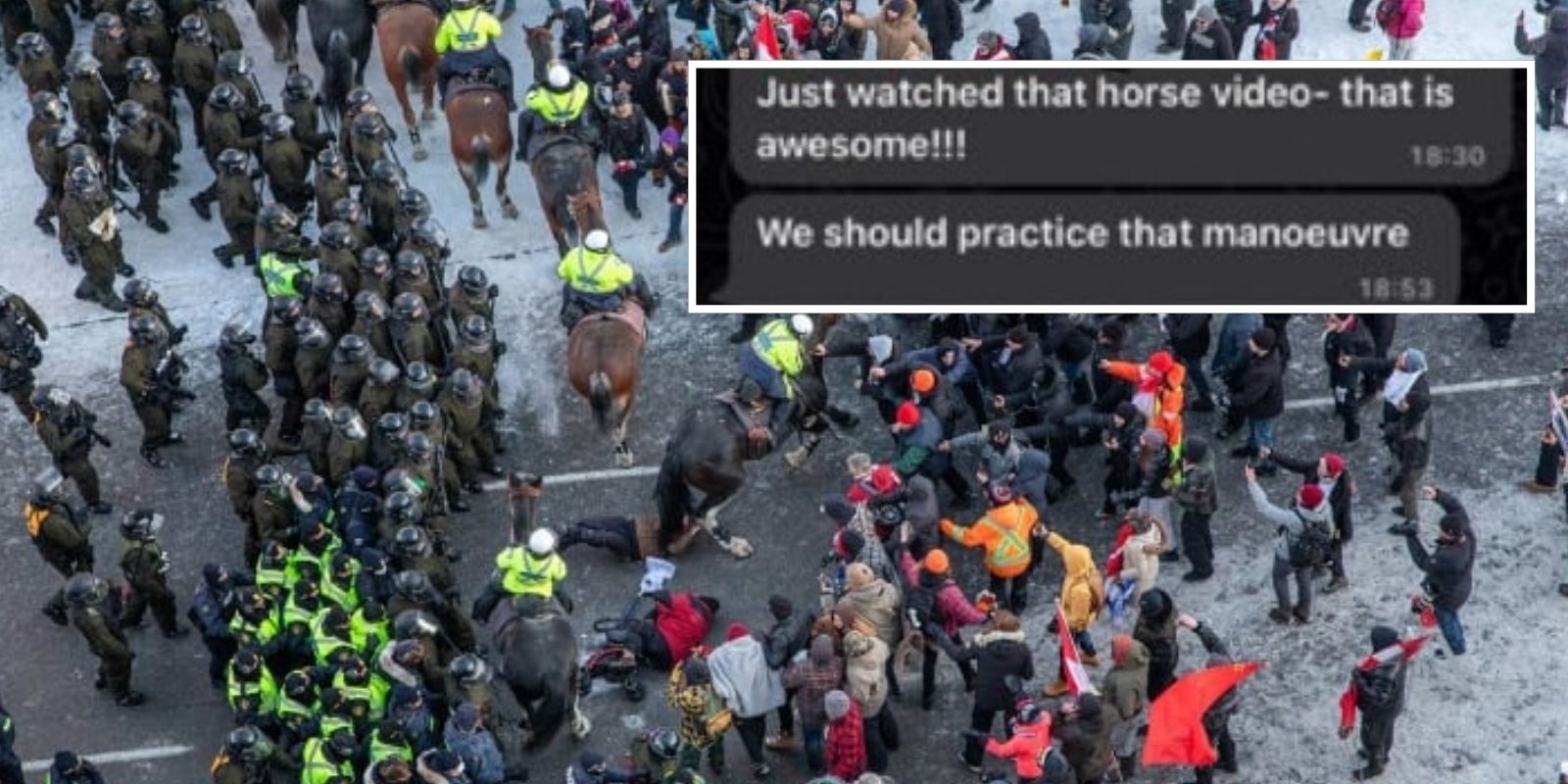 In leaked screenshots of a WhatsApp group chat involving the Royal Canadian Mounted Police (RCMP) Musical Ride team, the mounties appear to be excited at the idea of using force against the freedom protesters in Ottawa.

In an official statement published Sunday, RCMP have since confirmed the legitimacy of the leaked messages, which have been shared widely, both acknowledging that authorities are aware of the material circulating on social media and verifying that they're "looking into the matter."

"This material is not representative of those who have committed themselves to serving Canadians with integrity and professionalism," the statement reads.

"All members of the RCMP know that, whether on or off duty, they have a responsibility to hold themselves to the highest professional standards and are subject to the Code of Conduct of the RCMP at all times. This includes acting with integrity, fairness, and impartiality, and avoiding any potential conflicts between their professional responsibilities and private interests," the statement concludes.

In a group chat called "SOCIAL Musical Ride 2022," the RCMP members expressed their excitement at going to Ottawa to crack down on the protests there.

Screenshots of this chat were obtained by Rebel News.

In one screenshot, a person by the name of Andrew Nixon writes: "Cheers crew! Here's to some sweet OT this weekend for our on call members. Don't kick all of them out until next weeks group gets our turn."

He writes in another message: "I'm signed up. Anyone not signed up jump on this. You're police officers first and ride members second. Don't coward away when we're needed. Even one shift can relieve an ops member for one night."

One person commented on the police accommodations, saying, "Nice downroom in Chateau Laurier."

Nixon adds at another point: "Time for the protestors to hear our jackboots on the ground."

He later backtracks when someone says this is a "kinder gentler RCMP," and says, "Okay we can give out free hubs and unicorn stickers."

At one point, the group talks about the moment a number of freedom protesters were trampled by mounted police officers. A member wrote: "Just watched that horse video - that is awesome!! We should practice that manoeuvre."

A woman who was reportedly injured when police on horseback rode through a crowd of protesters Friday evening has been identified as an Indigenous elder who was using a walking assist device and reportedly suffered a broken clavicle.

The revealing of these screenshots come after police in Ottawa used batons on protesters as they attempted to clear them from the city.

On Saturday, Rebel News reporter Alexa Lavoie was beaten with a police baton and shot at point-blank range with a tear gas round.

"I know the rest of the Media Party is delighting at Trudeau's brutality and martial law. But we still believe in peace and freedom," Levant continued.