Now that restrictions are merely being suggested to curb the spread of Monkeypox, cries of homophobia and discrimination abound. 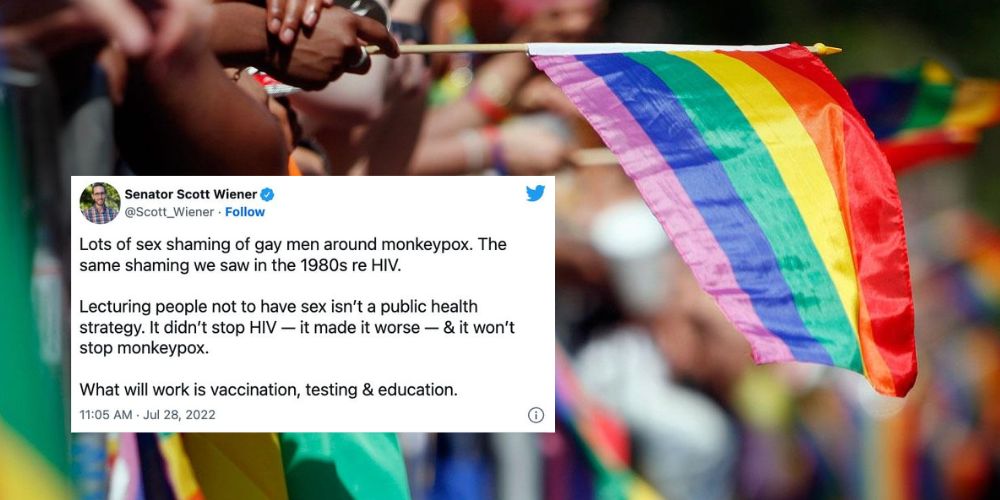 While the nation continues to try to move forward from the Covid-19 pandemic, another public health emergency seems to be brewing on the not so distant horizon: Monkeypox.

But while the restrictions imposed for Covid were roundly lauded by those on the left, who insisted that everyone mask and get vaccinated regardless of personal preference, calling those who refused "grandma killers," or even worse, now that restrictions are merely being suggested to curb the spread of Monkeypox, cries of homophobia and discrimination abound.

With nearly all cases of monkeypox reported outside of Africa being amongst men who have sex with men, according to the New York Times, this has prompted leaders to suggest that this population cease or cut back on the number of sexual partners they have or sexual activities they take part in.

The World Health Organization even made the suggestion earlier this week, according to STAT News.

According to Johns Hopkins Medicine, monkeypox is an infection caused by a virus not so dissimilar to the one that causes smallpox, and requires close personal contact to spread, like through sexual activities.

Tedros Adhanom, director-general of the World Health Organization, said on Wednesday during the organization’s weekly press conference, "For men who have sex with men, this includes, for the moment, reducing your number of sexual partners, reconsidering sex with new partners, and exchanging contact details with any new partners to enable follow-up if needed," in reference to curtailing the spread of the virus.

The World Health Organization, as well as state leaders in the US, have declared the monkeypox outbreak a "public health emergency."

While the symptoms include general feelings of illness like aches and fevers, the most notable symptom seen externally is that of a blister-like rash that spreads across the body.

This suggestion appears to have fallen on deaf ears though, with many saying that the mere suggestion is homophobic, and in the same breath likening the government response and slow vaccine rollout to the 1980’s AIDS pandemic.

Many have noted that those taking issue with this simple line of advise in preventing disease are the same ones who were militant in Covid-19 precautions, like masking and boosting.

Billy Binion, associate editor at Reason, noted this phenomenon in a Twitter thread on Thursday.

"A few months ago, we were told it was virtuous to mock folks who died of COVID, esp if they were vaccine-hesitant," Binion wrote. "With Monkeypox, we’re told it’s too far to ask gay men to temporarily desist from promiscuous sex. It says a lot about how we filter everything through identity."

Binion noted the sense of morality that the public had throughout the pandemic, with people being branded as "literal murderer(s)" for spreading the disease," and as "privileged a**hole(s)" for attending dinner with friends.

"But now a marginalized group is *at the center* of a pandemic. So asking something very basic—to exercise sexual discretion, not abstinence—is unthinkable. It’s so infantilizing," Binion wrote.

"That this is about identity is made clear by the fact that the CDC issued (cringe) sexual guidelines—regardless of orientation—during COVID," Binion added. "But we’re told by some that we can’t emphasize this during Monkeypox—a virus that easily spreads thru sexual contact!—bc of homophobia."

Binion did concede that the suggestion that gay men curb their sexual activities may not be the best long term suggestion, "But to act like this is a big ask—as if all gay men are sex-crazed fiends—is nothing short of absurd."

Similar sentiments have been expressed across social media, with users questioning why the suggestion is such a large ask.

In 2020, Wiener posted a condescending picture to Twitter telling users that if they don’t want to get urinated on, both they and the other person should be wearing pants. This was meant to be an analogy for masks.

In 2021, Wiener referred to those not wearing masks at the January 6 riot at the Capitol building as "Neanderthals."

On Thursday though, Wiener tweeted that the suggestions surrounding curtailing the spread of monkeypox equates to "sex shaming of gay men."

"Lecturing people not to have sex isn’t a public health strategy. It didn’t stop HIV — it made it worse — & it won’t stop monkeypox," Wiener wrote. "What will work is vaccination, testing & education."

The virus is spreading through the community primarily by means of sexual activity. Those in this vulnerable population to contracting monkeypox have complained about the slow vaccine rollout to protect themselves against the virus. Advocates for the gay community claim that giving information about how to prevent the spread of this virus discriminates against the very community that would be most benefited by the information.