"The medical safeguarding of children should not be a political issue. Since truth is a prerequisite for justice, we must ensure that the already hot embers of political tribalism are not stoked," the members of Detrans United write. 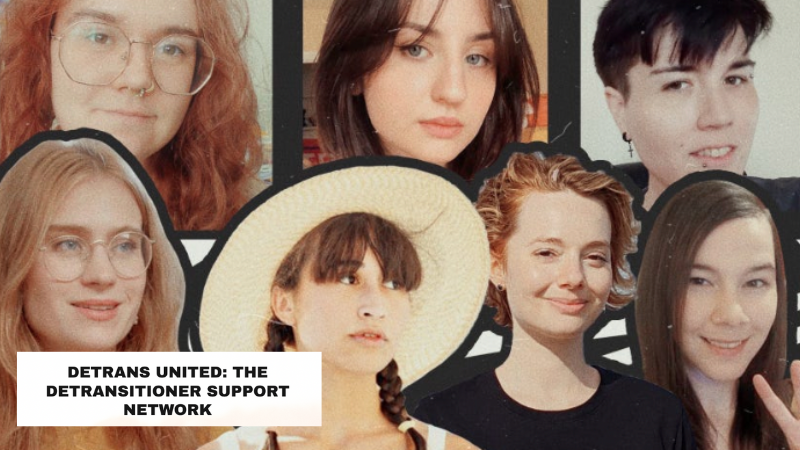 Libby Emmons Brooklyn NY
Oct 8, 2022 minute read
ADVERTISEMENT
ADVERTISEMENT
Medical gender transition brings with it many harms that are neither realized nor particularly well spelled out when the promise of "gender euphoria" is made by activists and doctors alike. Now a group of women and men are speaking out, and have come together to form Detrans United. They have reached out to Merrick Garland, Attorney General for the United States, to demand that the Department of Justice take action on the so-called "gender care" industry. The letter is in reaction to a letter sent by the American Medical Association, along with other medical groups, to pressure the DOJ to prevent people from speaking out online against medical gender transition.

"The recent letter by these groups calling on the DOJ to put pressure on social media companies to censor who they portray as 'high-profile users on social media' sharing 'false and misleading information' is nothing more than an attempt to silence the reasonable voices of concerned critics calling for a more cautious approach to experimental medical practices impacting vulnerable children," the group writes.

Some of these spoke out in a documentary, as well, called Detransition Diaries: Saving our Sisters.

The group writes about their collective experience at the hands of "medical 'experts'" who encouraged them to pursue hormone treatment and surgeries "to bring our bodies into closer alignment with what we whought was out true 'gender identity.'" Many of them had "extensive histories of mental illness" and had also "experienced childhood trauma," they write. As soon as they uttered the word "gender" to their health care providers jumped into "affirmation" mode, and huried them onto an irreversible course to medically alter them to appear more male.

"This utterance," they write, "placed us on a narrow medical pathway that led us to sacrifice our healthy bodies and future fertility in obeisance to the claim that our suffering was a result of having a 'gender identity' that did not 'match' our biological sex. In other words, we were 'born in the wrong body.'"

They write that it was not only that they were misled by the medical industry, but that their parents were as well. "They were told the common myth that if they did not 'affirm' our new identities, which entailed fully approving our medical transition, then we would likely commit suicide. Given these options, what loving parent wouldn’t choose to transition their child? This is not informed consent, but a decision forced under extreme duress." In fact, many of those supposed studies about suicide rates among those who are not given the go-ahead to medically transition have been debunked.

As more and more people go through the process of medical gender transition, more people are emerging on the other side realizing that the drugs and surgeries did not make them happier. Many of these are young women who began presenting as male, then moved on to cross-sex hormones and surgeries, such as double mastectomies and the removal of the reproductive system.

While the most visible face of gender transition is often the biological male who dons makeup, takes estrogen, and has surgically enhanced breasts, the numbers of girls and young women who get involved in transition themselves has steadily increased, with recent figures showing a more than 4,000 percent increase in the number of girls going through this process.

But upon going through this process and emerging on the other side, many of these men and women realize that no, the drugs and surgeries did not turn them into men. They are still men and women, only now they are lacking their male and female parts, such as breasts, male or reproductive systems. Many women have permanent facial hair and have permanently lost their feminine voices as the effects of testosterone do not simply vanish once the injections stop.

"The medical safeguarding of children should not be a political issue. Since truth is a prerequisite for justice, we must ensure that the already hot embers of political tribalism are not stoked. Children deserve the best evidence-based medical care available. Silencing the victims and critics of 'gender affirming' practices is not a pathway to truth and justice, but to ignorance and further harm," they conclude.

The letter is signed by Chloe Cole, Helena Kerschner, Cat Cattison, Sinéad Watson, Grace Lidinsky-Smith, Ritchie, and Prisha Mosley, and they invite others who have found themselves with regret on the other side of medical gender transition to join their cause.

The Biden administration has come out roundly in favor of the medical gender transition of teens, with President Biden instructing parents to "affirm your kids" on the newly launched Trans Day of Visibility, in April.

The adminsitration's Assistant Secretary of Health and Human Services, Dr. Rachel Levine, a biolgogical male who transitioned to present as a woman later in life after fathering children, has advocated for "trans youth" to receive medical treatment for the condition of "gender dysphoria."

The administration as a whole has blasted states that have put legal safeguarding measures in place to protect children and teens from a medical industry driven by the blanket commitment to "affirmation" where, as the detransitioners state, few questions are asked once gender comes into the picture.

Levine, and many other providers of "gender care" have said that gender dysphoria is not the cause of mental health stress for people who suffer from the condition, but a lack of acceptance in society that cause mental issues.
ADVERTISEMENT
ADVERTISEMENT
detrans group