"Suspending the Twitter account of a major news organization for publishing a truthful story was obviously incredibly inappropriate." 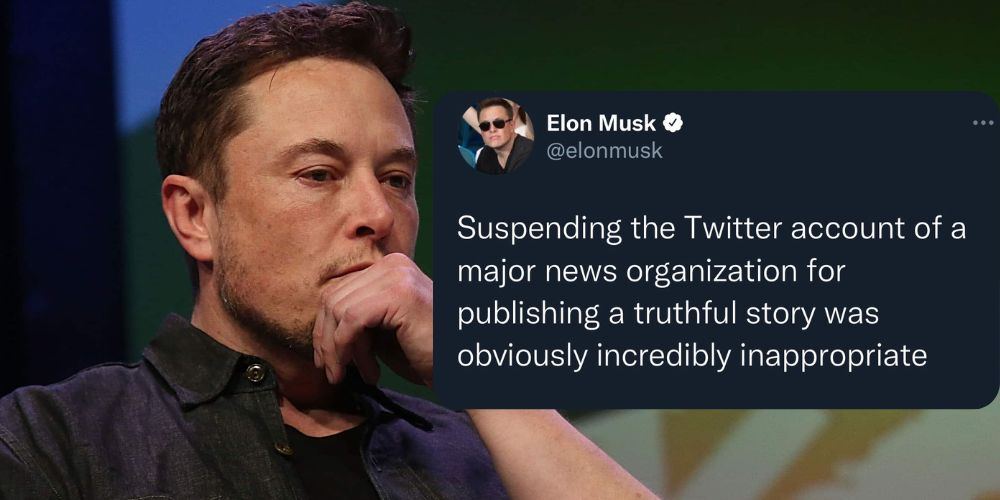 Musk made the comments in response to a tweet from co-host of Breaking Points Saagar Enjeti about Twitter executive and top lawyer Vijaya Gadde. Gadde was allegedly responsible for censoring The Post's article and suspending their account.

"Vijaya Gadde, the top censorship advocate at Twitter who famously gaslit the world on Joe Rogan's podcast and censored the Hunter Biden laptop story, is very upset about the @elonmusk takeover," Saagar Enjeti said in a Twitter post.

Musk replied, "Suspending the Twitter account of a major news organization for publishing a truthful story was obviously incredibly inappropriate."

Twitter's top lawyer held a meeting Monday where she cried to employees who work under her over Tesla and Space X CEO Elon Musk acquiring the company for $44 billion.

Gadde is a key member of Twitter, working at the company since 2011 in their trust and safety, public policy, and legal departments. When it comes to what is considered "hate speech" and harassment, Gadde oversaw definitions about Twitter's "healthy conversation" agenda.

In late 2020, Gadde had Twitter "change course" after initially blocking the bombshell story from the New York Post about Hunter Biden's laptop. Her team also oversaw the permanent banning of former President Donald Trump in January 2021, following the Capitol riot on Jan. 6 of that year.

In that case, CNN credited Gadde for taking the main lead on the Trump-ban matter as former Twitter CEO Jack Dorsey was away on vacation during that time.

The head of Twitter's Site Integrity Team, Yoel Roth, said the company's decision to block access to New York Post's reporting in October of 2020 was justified because of the information they allegedly received from US intelligence officials, according to the Washington Free Beacon.

After the New York Post's reporting on Hunter Biden's laptop was suppressed, a poll was released showing that 16 percent of voters who were unaware of the laptop scandal would have not voted for Biden had they known about it at the time.

The reporting on Hunter Biden's laptop, which revealed President Biden's involvement with his son's enterprises with Ukrainian energy giant Burisma, was broken by the New York Post shortly before the 2020 Presidential Election. Other media outlets refused to report on the story or claimed that the materials were "Russian disinformation."

The New York Times, NPR, Politico and the Washington Post, acted to suppress the story, with the Times publishing an article calling the laptop story "unsubstantiated" in September 2021, then editing the story without publishing a formal correction notice.

In March of this year, the Times acknowledged the legitimacy of the story as part of another story about Hunter Biden's tax liabilities.

Biden has repeatedly denied the veracity of the story, although sources in federal law enforcement had already confirmed the authenticity of the laptop and its contents as far back as Oct 2020.