US Representative Elise Stefanik busted CNN’s Jake Tapper on Friday for lying about who he’d book for his shows. 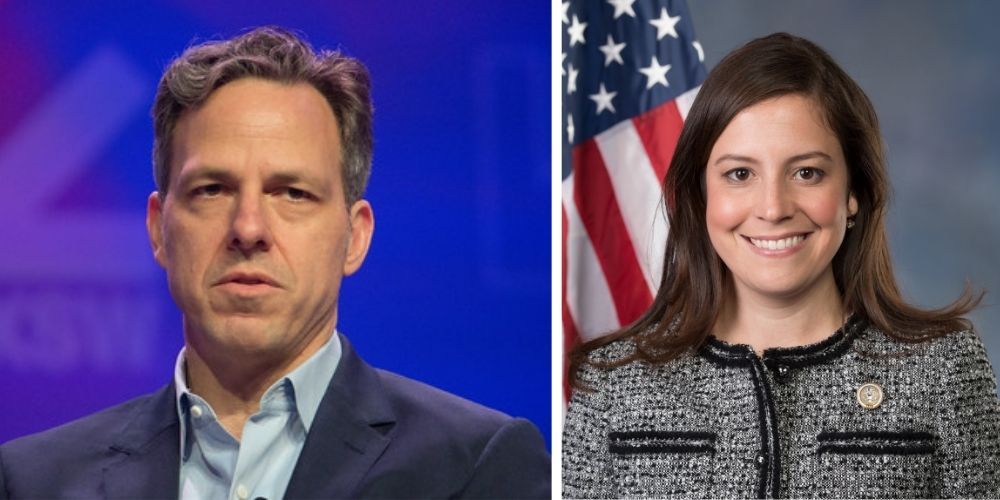 US Representative Elise Stefanik busted CNN’s Jake Tapper on Friday for lying about who he’d book for his shows.

Stefanik posted to her Twitter Friday a series of emails from Tapper’s booking team looking to get the Congresswoman on his show.

"Shot… chaser, chaser, chaser," wrote Stefanik, in reference to the four photos she posted. "Drink up. @jaketapper! You’ll need it with your plummeting rating."

Stefanik showed that multiple times in the beginning of May 2021, Tapper’s team reached out to get her on State of the Union.

Also included in her post a screenshot of a June 4 Politico article where Tapper stated he wouldn’t have "Republicans who push 'election fraud' conspiracies" on his show.

Senator Josh Hawley's press secretary called out Tapper as well, pointing out that, contrary to Tapper's claims, his show had asked Hawley to appear a jaw-dropping 18 TIMES.

"It’s not a policy, but it’s a philosophy where I just don’t want to deal with it," Tapper told Kara Swisher on her New York Times podcast, Sway, last week. "I mean, there’s about a third of the House Republican caucus that I am willing to book. I could name them to you if you want."

"And if the bookers had come to me and said he was an option I would have said no, as I have for every Election Liar," claimed Tapper on Twitter. "I only started explaining to them last month the reasons behind my saying no to every Big Liar.  Weird to admit that your boss is an Election Liar but ok."

Tapper, famous for pushing the now-debunked Russia collusion hoax and for suppressing the Hunter Biden influence-peddling story, was named "The King of Truth" by Esquire Magazine last year.

In the aftermath of the 2020 presidential election, Tapper warned that there would be consequences for Trump supporters, yet he had chastised those who compiled lists of pro-Trump adversaries in order to hold the backers accountable.

Responding to the Trump Accountability Project's efforts, Tapper said that blacklisting those who worked for the Trump administration was not in line with the "calls for unity and healing we've heard from President-elect Biden."

He then had to delete false information he'd posted about Trump supporters targeting Biden supporters when it turned out to be untrue.

Lamb was vulnerable and defending the seat against one of former President Donald Trump's favorite candidates who spoke on the opening night of the Republican National Convention. Parnell received Trump's "complete and total endorsement" in May and was even name dropped the year before by the president to bid for office before the conservative announced the 2020 run for Congress.

In addition to being a frequent spreader of misinformation, Tapper is also a promoter of censorship. Tapper took to Twitter last March to voice support for the censorship of Dr. Seuss books, lambasting the purported "racist" images from the children's collection.

As the Seuss Foundation pulled several titles from the author's catalogue, Tapper didn't seem to think there was any issue with an author's estate removing books from print, a choice based on free will. One cannot stand for the principle of free speech without defending the content of the speech itself, Tapper argued, although to be in favor of free speech means to defend and to believe in the right of the speaker to speak without distinction between agreeing and differing opinion.