Man behind fake Steele dossier arrested for 'lying to the FBI' 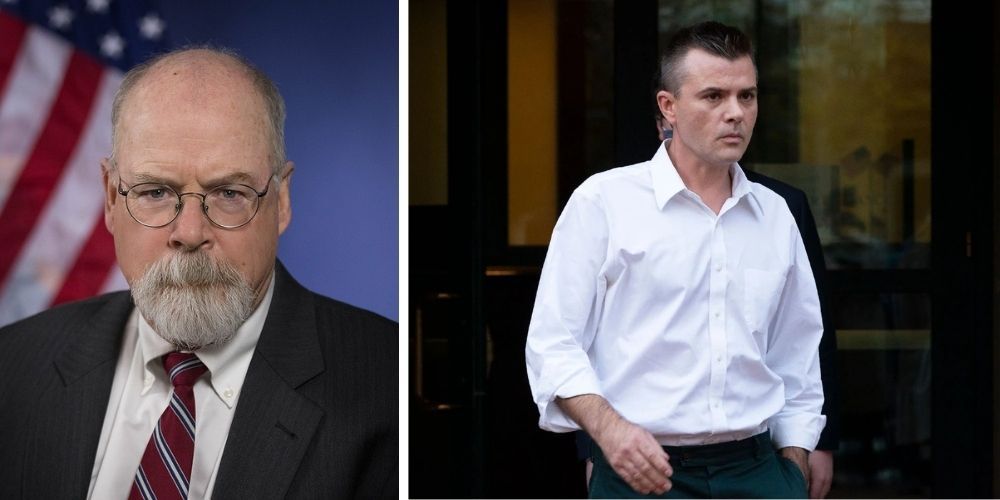 On Thursday, the Russian national who served as a key source of information behind the Steele dossier, a collection of reports compiled back in 2016 about Donald Trump's alleged ties to Russia, has been arrested and indicted for "lying to the FBI."

Igor Danchenko was arrested as part of special counsel John Durham's investigation into the FBI's Trump-Russia probe, according to NPR.

Danchenko was charged with five counts of making false statements to the FBI.

"The 43-year-old was a primary source of information for the so-called Steele dossier, a collection of reports compiled by former British spy Christopher Steele. The dossier contained salacious claims about then-candidate Trump as well as allegations that people within Trump's orbit were conspiring with Russia to win the 2016 U.S. presidential election," NPR wrote.

The information compiled by Steele was later used to get surveillance on Carter Page, a former Trump campaign adviser.

Danchenko has been interviewed numerous times by the FBI back in 2017 regarding the information he had provided to Steele, and according to the indictment, Danchenko lied to the FBI in those interviews about his sources.

In one case of lying, "Danchenko told the FBI he received an anonymous phone call in July 2016 from someone he believed to be the president of the Russian-American Chamber of Commerce, who informed him about a 'conspiracy of cooperation' between the Trump campaign and Russia," wrote NPR.

Prosecutors say a version of that information was included in the dossier.

The lies told by Danchenko matter due to the fact that the FBI relied on his information released in the dossier to surveil Page, and because the FBI had devoted resources to attempt to corroborate the information given, prosecutors say.

In an opinion piece written for Fox News, Gregg Jarrett stated that Danchenko is a "Ukrainian-born resident of the United States who worked as a senior research analyst for the Washington, D.C. liberal think tank, Brookings Institution," not a Russian national like believed.

"When the dossier was concocted in 2016, the president of Brookings was Strobe Talbott, a longtime friend and ally of Hillary Clinton.  This was hardly a coincidence," he continued.

"Danchenko admitted to the FBI that Steele paid him to dig up dirt on Trump," wrote Jarrett. "The Brookings researcher/analyst seemed desperate for money.  He told agents that he 'felt like he had to report something back to Steele' to justify the monthly salary he was receiving.  So, he decided to traffic in gossip to keep the paychecks coming.  Facts and truth were irrelevant."

Jarrett wrote that much of the information included in the Steele dossier was merely just stories and "prattle and drivel."

"In telephone calls and voice communications through Skype, Danchenko spoke with a handful of people he knew in Russia and others he described as 'random associates.'  Some were barroom buddies with whom he would 'drink heavily,'" he wrote.

"They traded yarns and tall stories about Trump.  It was nothing more than prattle and drivel —a guy told a guy who told me that someone connected to Trump might have done thus-and-such.  You get the picture.  It's wasn't plausible intelligence; it was scandalous junk derived from 'speculation and open secrets,'" Jarrett continued.

Jarrett also wrote that Danchenko had insisted in FBI interviews that he had told Steele the information he gathered was  just "rumor and speculation and that he had not been able to confirm" any of the Trump-Russia collusion stories.

Danchenko is the third person to face charges as a response to Durham's work. Michael Sussmann was charged in September for lying to the FBI. Kevin Clinesmith has also been charged, pleading not guilty to doctoring an email.

"For anyone now trying to claim that the now-fully-obliterated-and-exposed Steele Dossier fraud was not centrally featured as a key part of Russiagate by corporate media, see this thread, complete with links and citations that prove otherwise," wrote Glenn Greenwald.

A 2020 thread regarding the Steele dossier traveled back in recent years to highlight the various outlets that blasted the dossier everywhere due to the fact that it made Trump look bad.

The thread included CNN, New York Magazine, MSNBC, Mother Jones, Newsweek, Slate, and more. The Twitter thread dives deep into over a dozen outlets that pushed the dossier for months, or even years.