"Yes, I do think this site can and will change pretty dramatically if Musk gets full control over it. No, there is no immediate replacement. If it gets don early enough, based on the people he's aligned with, yes, it could actually affect midterms." 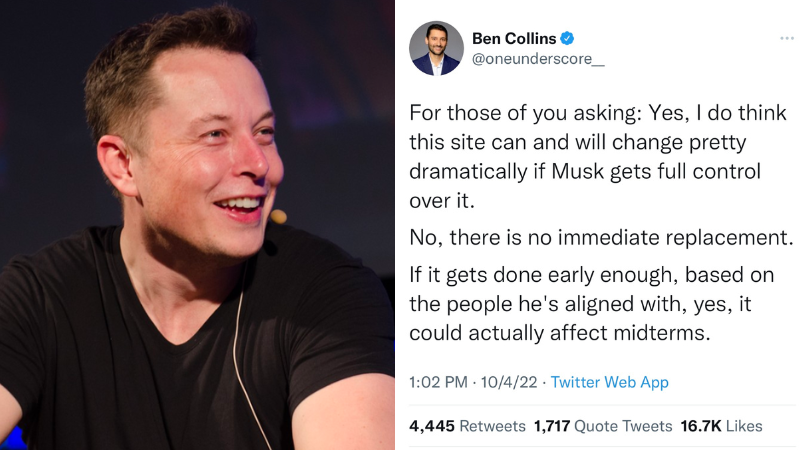 Libby Emmons Brooklyn NY
Oct 5, 2022 minute read
ADVERTISEMENT
ADVERTISEMENT
The confirmation of Elon Musk's Twitter buy has mainstream media running scared as to what the consequences of Musk's promise to make Twitter a platform dedicated to free speech will be. This after it was revealed that the Biden administration held weekly meetings to tell social media companies what "misinformation" they wanted suppressed on the platforms.

"For those of you asking," said NBC's Ben Collins, implying that the midterm elections will be affected by the sale. "Yes, I do think this site can and will change pretty dramatically if Musk gets full control over it. No, there is no immediate replacement. If it gets don early enough, based on the people he's aligned with, yes, it could actually affect midterms."

For many, this was a seeming admission that Democrats and their allies in the media have used Twitter to affect elections in their own favor in the past. In the lead up to the 2020 presdential election, there was concern that Twitter was being manipulated by Democrats to censor and suppress informaiton that was unfavorable to then Democrat presidential nominee Joe Biden.

Those concerns were then fully realized when it turned out that the stories about the president's son's shady business deals and overseas influence peddling were intentionally suppressed and censored. They were removed from not only Twitter, but suppressed on Facebook. The reason? Both CEO's of Twitter and Facebook later admitted that the FBI had tipped them off that there would be a "dump" of information, planted by Russian bad actors, that the social media platforms should watch out for and not allow on their sites.

This "dump" tuned out to be factual reporting from the New York Post showing, through the Biden family's own correspondence, that they were engaged in profiting off of Joe Biden's powerful position and gaining access to that position on behalf of international businessmen in both Ukraine and China.

"If Musk is really taking this site private, there are no real guardrails anymore. Rulemaking can be capricious. He can elevate any idea or person he wants through recommendations and UX choices and there will be no oversight on this as a private company," Collins went on to say, seemingly oblivious to the fact that he apparently had no issue with the elevation of persons or ideas that had been engaged in by Twitter's prior administrators.

Human Events Daily's Jack Posobiec posits that Collins doesn't even "know what he admitted to." Posobiec's Twitter account, it was recently revealed, was targeted by the government.

Turning Point USA's Charlie Kirk noted that this was a rare citing of mainstream media being "honest, albeit unwittingly, that current Twitter rules and standards favor Democrats."

The Federalist's Mollie Hemmingway called out Collin's tweet as an "admission from corporate press that Twitter of course controld outcome and margins of elections by suppressing news and information that is harmful to Dems."

"We know from Musk's private texts he talks with people who want to let Trump back on and make a 'Blake Masters type' a 'VP of enforcement," Collins wrote. "Masters is a far-right Senate candidate backed by Facebook founder and Trump donor Peter Thiel." Masters is a venture capitalist who is pro-life and wants to close the border.

Others in mainstream media were also concerned that their outsized impact on controlling what is allowed to be said on the platform would be curbed by an owner who doubles as a free speech advocate.

Collins, who is concerned that former president Donald Trump will make a reappearance on Twitter after having been banned in the early days of 2021, is of the opinion that Musk's ownership "will lead to deplatforming of political enemies." He is concerned that there will not be enough moderation on the platform, and that conspiracy theories will run wild.

Many, many so-called conspiracy theories over the past few years have been proven to be correct.

The idea that the Covid-19 virus originated in a Wuhan lab was called a racist conspiracy theory, until it was shown to be the most likely origin for that virus.

It was called a conspiracy theory that the allegations that Donald Trump colluded with Russia to alter the 2016 elecection were false, and they were later shown to have been manufactured by people associated with the opposing campaign.

It was said to be a conspiracy theory that the vaccine for Covid-19 did not protect against contracting the virus, and it turns out that it does not offer that protection.

Additionally, users on the platform are routinely banned for saying things like "men aren't women."

Musk's buyout of the platform was predicated on his belief that Twitter should be dedicated to free speech. While the sale was on the rocks for several months over disagreements about how many bots, or fake accounts, are on the platform, Twitter took Musk to court to enforce the sale. The two parties came to terms on Tuesday.
ADVERTISEMENT
ADVERTISEMENT
elon nbc