According to the Portland Police Bureau, the number of burglaries, robberies, vehicle thefts and vandalism are at their highest in Portland since 2019, and the year is not over yet. 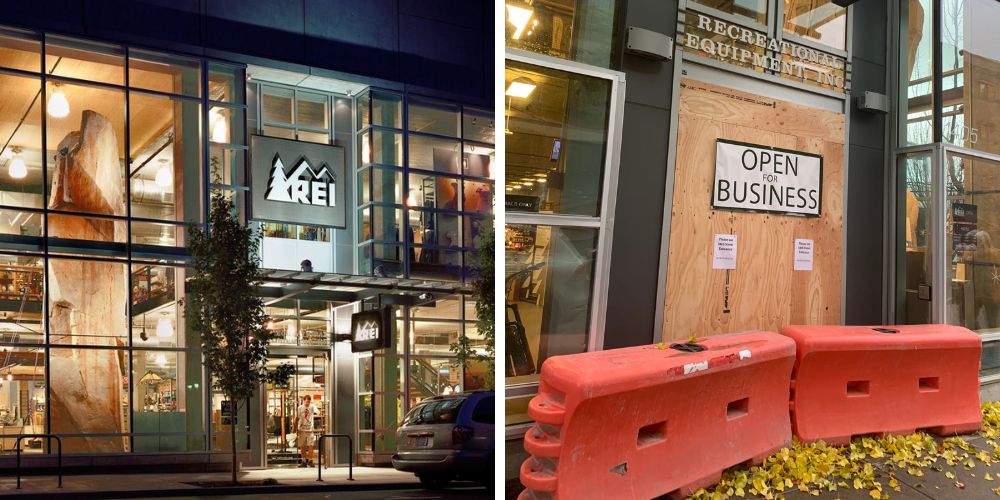 Ari Hoffman Seattle WA
Nov 30, 2022 minute read
ADVERTISEMENT
ADVERTISEMENT
On the busiest shopping day of the year, a car crashed through the glass front doors of the REI in Portland’s Pearl District.

It is the store’s third break-in one week according to The Oregonian, and the latest in a slew of robberies at Portland stores.

The outlet reported that no employees were in the store at the time of the incident as it was closed for the company’s annual "Opt Outside" day, REI’s alternative to Black Friday.

In an email to REI’s employees obtained by the outlet, the store manager said that after the latest incident, as well as two other break-ins earlier in the week, they would be increasing security.

The glass shipping door has been reportedly replaced with a metal one and a security gate has been added as well as floodlights and overnight guards. The store also placed a barricade on Johnson Street near the store’s front doors.

According to the Portland Police Bureau, the number of burglaries, robberies, vehicle thefts, and vandalism are at its highest in Portland since 2019, and the year is not over yet. Burglaries have jumped from 3,508 in 2019 to 4,868 in 2022 and between January and October 2022, residents and business owners have reported 1,181 robberies, 9,212 vehicle thefts, and 9,971 incidents of vandalism.

That is compared to the same time period in 2019 which saw 818 robberies, 5,414 vehicle thefts, and 5,151 incidents of vandalism. Those figures do not include crimes that were not reported to the authorities.

Earlier this month it was revealed that police are only referring a fraction of reported crimes to Multnomah County prosecutors, and that progressive District Attorney Mike Schmidt is barely prosecuting those that do land on his desk.

Rains PDX, an iconic European designer outerwear brand that only had four locations across the US announced last week that the only store in Oregon is closing after owner Marcy Landolfo saw her business undergo its fifteenth break-in in just a year and a half and she reached her "breaking point."

Additionally, with just over a month left in 2022, Portland has already had a record 93 homicides eclipsing last year’s record of 92 homicides, which shattered the city’s previous record of 70 homicides in 1987.

Aside from the crime, Portland stores are still recovering from lower foot traffic and revenue following the pandemic lockdowns, as well as increased online shopping. Many Portlanders have fled downtown for the suburbs or other states.