In the latest series of hidden camera recordings, Project Veritas revealed that a Colorado Democratic Party executive committee member is an Antifa militant hellbent on igniting a political revolution in America. 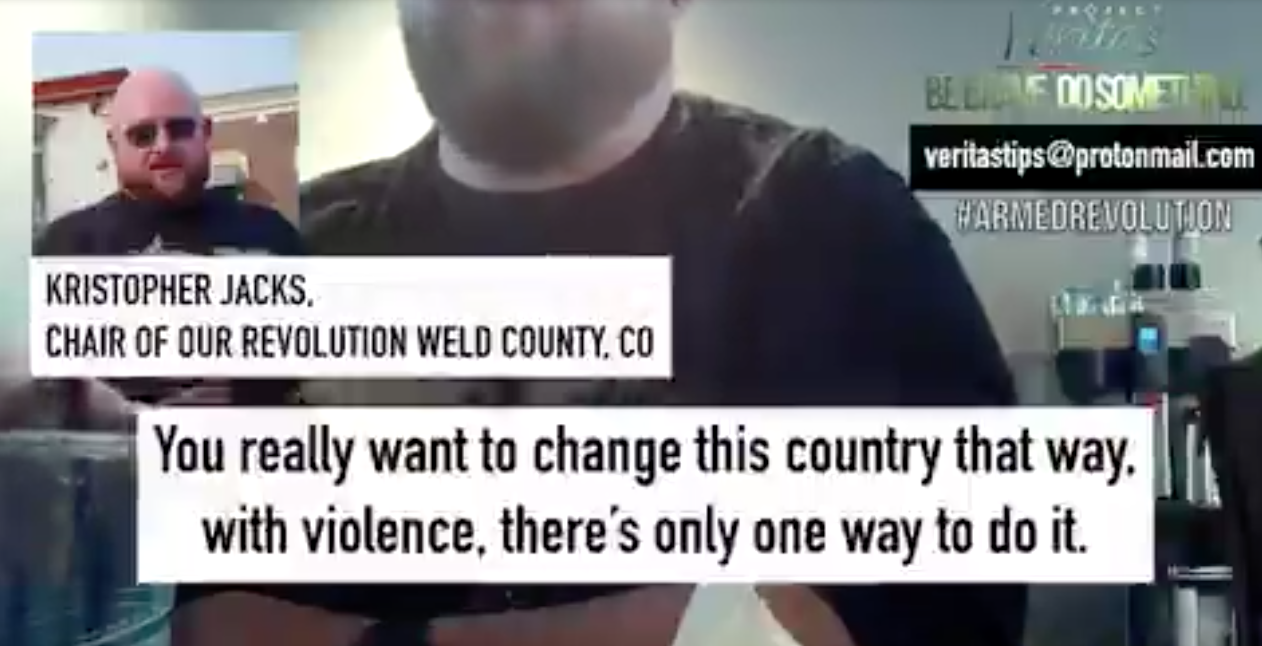 In the latest series of hidden camera recordings, Project Veritas revealed that a Colorado Democratic Party executive committee member is an Antifa militant hellbent on igniting a political revolution in America.

This comes after a Denver shooting at a “Black Lives Matter-Antifa Soup Drive” left a conservative demonstrator dead on Saturday afternoon, who was reportedly killed at the hands of a private, unlicensed security guard hired by NBC News affiliate 9NEWS. The shooter's ideology was unearthed as a long-time outspoken leftist against Trump and law enforcement.

"2020 is a political revolution," said Kristopher Jacks, Weld County chair of the Our Revolution, a radical leftist organization spun out of Sen. Bernie Sanders's 2016 presidential campaign. A Bernie button topped the man's sash of leftist pins. "I am going to do everything morally acceptable to win. I will lie. I will cheat. I will steal. Because that's morally acceptable in this political environment."

Jacks functions as a "trainer, mentor and on-the-ground quarterback at Our Revolution protests," Project Veritas founder James O'Keefe explained in a report. “Jacks represents the radical wing of the Democratic Party in Colorado—he is someone most Americans should be afraid of,” O’Keefe stated.

Project Veritas further discovered that Jacks believes that a Biden administration would be used to advance his political objectives or else violence will ensue. “Joe Biden was presumably left-wing, and he's got a functioning signing hand,” Jacks asserted, alluding to Biden's disputed cognitive decline. “As long as there's progressive legislation that comes across his desk, I am confident we can occupy his house."

Then Jacks referenced Biden's presumed residence at the White House if he were elected to the Oval Office in November's general election. "We know where he’ll live, and yeah, he wants to veto Medicare For All. Let him veto it! He's never leaving that house again without protest.” Despite his misgivings, Jacks purports that the Democratic ticket will cooperate with his radical agenda or face entrapment.

Mass civil unrest will spill to city streets and residential neighborhoods, according to leftist war games. "[W]e're already ready to do it. We’re on," Jacks warned, justifying violence to gain complete political control of the country.

“I think the right wing has a monopoly right now on strong, violent rhetoric, and I think they underestimate how many people on the left are organized, trained, armed, and ready to go should they decide to do their sh*t," Jacks continued.

Jacks noted the numbers on his side as a "reminder" that "there’s a reason you guys feared the Communists more than you feared the Nazis," also alleging that Martin Luther King Jr. "wouldn’t have been as successful if it wasn’t for Malcolm X and Nation of Islam, Black Panthers, all of them doing their thing too.”

"The left is already geared up. We've been practicing for four years against somebody who doesn't listen," Jacks bucked President Donald Trump. "Now, we're going to go up against Democrats who are the world's biggest p*ssies, who fold all the time.”

Jacks moved on to attack those slightly left-of-center. “Half of the struggle that I have isn’t with Republicans. It isn't with the right-wing. It's with f—in' moderates in the Democratic Party."

"It’s going to take a strategic hit against the .1 percent that’s in charge, cause that’s who it is. Killing random Nazis in the street, random f—ing bootlickers," Jacks told an undercover journalist, naming Amazon chief executive officer Jeff Bezos first on his hit list. "If you want to do some Versailles sh*t. If you want to do some Antifa sh*t. You really want to change this country that way, with violence, there’s only one way to do it. You gotta get people that are close to billionaires and start just, random billionaires start turning up dead."

Then Jacks stated that there "needs to be a militant group," adding that he "love[s] Antifa for that reason." Jacks spoke on the armed Antifa groups who draw inspiration from John Brown, the insurrection leader who charged the failed raid on the federal arsenal at Harpers Ferry in 1859.

Jacks also described how fear tactics and ultimatums threatened at point-blank range benefit his revolutionary ambitions. “But [unions] ain’t stabbing mother f—ers like they used to. They don’t have to though cause they used to stab people. See? And that’s all we gotta say. Guillotines, motherf—er. That’s all we gotta say. Option A: what I’m proposing. Option two: slicey bois. What are your choices? Which one do you want?”

The Denver Police Department is now investigating tonight's tapes, O'Keefe reported. "Thank you for your concern. This information will be passed along to the proper personnel," officials told Project Veritas.

The Post Millennial's contributing editor Ian Miles Cheong found that Jacks depicts himself as a senior proposal manager at CenturyLink on his since-deleted LinkedIn account.

Later on, CenturyLink suspended Jacks, notifying the public of his current employment status. "We recently became aware of comments made by an employee. We do not condone this type of activity and have contacted the appropriate law enforcement agencies. We have suspended the employee pending the results of an investigation."