Reps. Jim Banks and Marjorie Taylor Greene spoke up for women when they said that claims Levine is the "first female" in this post is a detriment for the furtherance of women's equal rights. 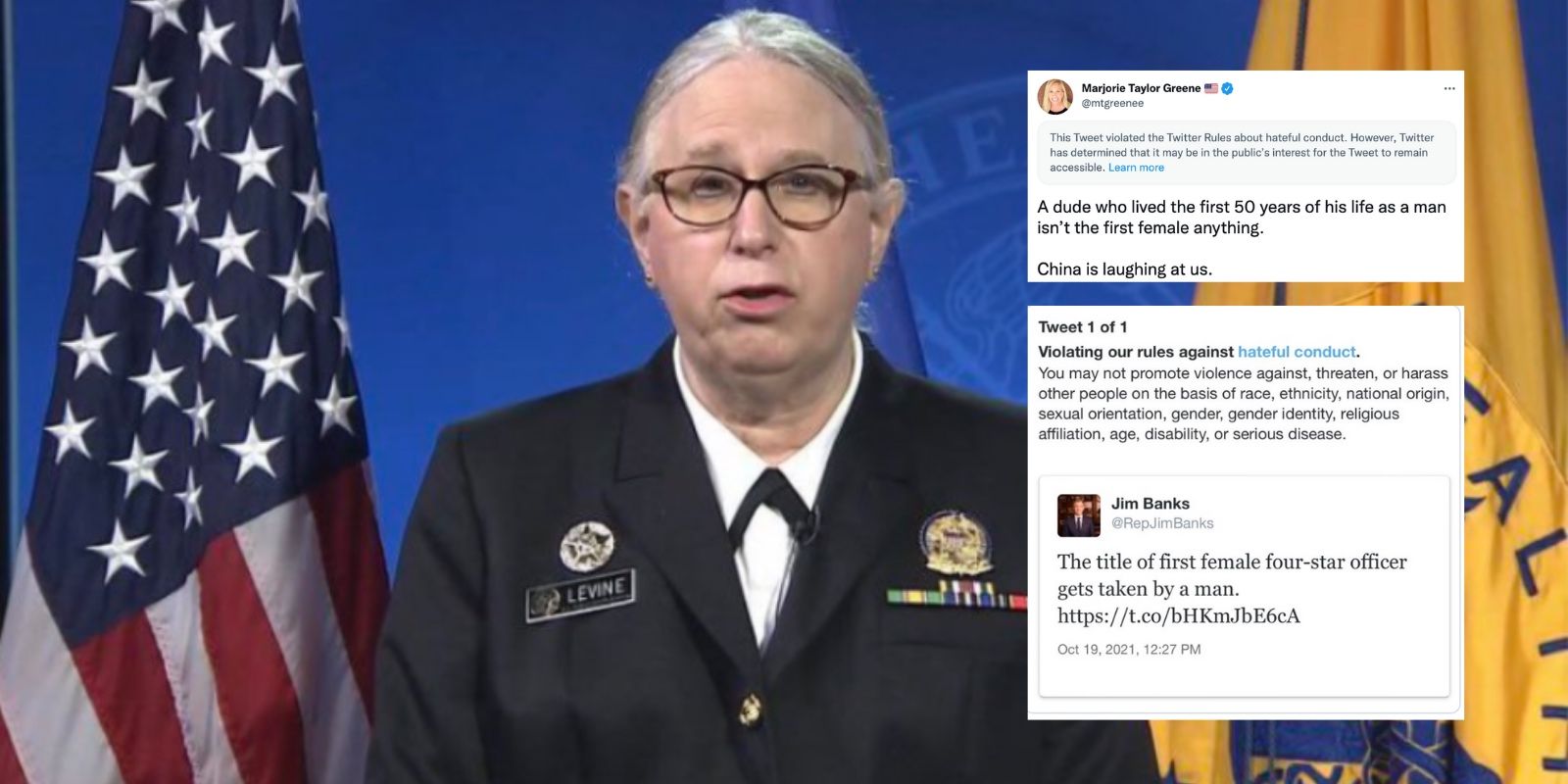 Twitter censored two US House Representatives for stating that Biden's assistant health secretary in the HHS, Dr. Rachel Levine, is a biological male. Levine, who made headlines this week for being name the "first-ever female" four-star admiral in the Public Health Service, lived their first 40+ years as a male before undergoing gender transition.

Reps. Jim Banks and Marjorie Taylor Greene spoke up for women when they posted their belief that Levine is a "man," and that saying Levine is the "first female" to attain this post is actually a detriment for the furtherance of women's equal rights. These two reps who took up the charge to defend women against erasure are Republicans.

Rep. Jim Banks of Indiana was suspended for his tweet saying that "the title of first female four-star officer gets taken by a man." If he had said "biological male," it is likely that this would not have been censored by Twitter, but because the words "man" and "woman" are now considered to be more about feelings than biology, Banks was in violation.

The rule against "hateful conduct," for which Banks is in violation per Twitter, reads that "You may not promote violence against, threaten, or harass other people on the basis of race, ethnicity, national origin, sexual orientation, gender, gender identity, religious affiliation, age, disability, or serious disease."

Banks' violation was to call Rachel Levine, a biological male, a "man."

Feminist writer Meghan Murphy was notoriously banned from Twitter a few years ago for referring to a biological male who identifies as transgender and used female and male pronouns interchangeably as "him."

Rep. Marjorie Taylor Greene of Georgia wrote on Twitter that "A dude who lived the first 50 years of his life as a man isn't the first female anything," going on to say that "China is laughing at us."

This censorship, but not removal, of Greene's tweet falls under Twitter's policy regarding public figures, that reads that they would allow a tweet that is in violation of their rules to stand if "The account represents a current or potential member of a local, state, national, or supra-national governmental or legislative body: Current holders of an elected or appointed leadership position in a governmental or legislative body..."

Greene is a prominent and vocal member of the GOP who never shies away from speaking her mind on issues controversial or otherwise. Banks is, too, but for some reason he was suspended rather than merely censored.

Levine was in her 40s when she transitioned from living as male to living as female. In a Washington Post profile in 2016, Levine said that "With very few exceptions my being transgender is not an issue."

When Levine was nominated to serve as physician general for the state of Pennsylvania by Governor Tom Wolfe in 2014, the confirmation vote in the Pennsylvania Senate was unanimous.

Levine was nominated for Assistant Health Secretary for Biden's Department of Health and Human Services, and was asked by some Senators about her feelings on pediatric gender transition, which Levine had supported.

Senator and doctor Rand Paul questioned Levine as to Levine's support for minors as young as three years old making decisions about gender transition. For simply asking these questions, one doctor to another, Paul was blasted by fellow senators who claimed that he had been disrespectful to Levine.

"It is really critical to me that our nominees be treated with respect and that our questions focus on their qualifications and the work ahead of us, rather than on ideological and harmful misrepresentations like those we heard from Senator Paul earlier," said Sen. Patty Murray (D-WA).

Levine's confirmation passed along party lines, as have most of Biden's nominations, with a 52 to 48 vote in the Senate.

Many people believe biological sex to be an immutable condition, regardless of surgery or pharmaceutical treatment. These, such as Banks and Greene, found there to be a real disconnect in seeing an individual who lived to their 40s as a male and fathered being named the "first female" four star admiral in the Public Health Service.

The Biden administration has touted their commitment to diversity, and Levine, in accepting the admiralty, spoke to how wonderful and diverse her attaining this position was.

"May this appointment today be the first of many more to come," Levine said. "Diversity makes us stronger."

"The time is now for our country to continue to move the bar forward for diversity," Levine continued. "And I am proud to wear this uniform and answer that call."

But for many, Levine, who spent the majority of her life as a white, biological male, with all of the privileges thereto, is not diverse at all, but more of the same. Levine's new achievement of "first female" is a hard pill for many to swallow, who are told not to trust their eyes, or science, but to simply believe what they are told to by officials who specialize in double-speak.