"Some officers plan on taking time off to decide what they will do long term. They don't seem eager to stay with SPD. Others explained that they are going to leave the SPD by the end of the year as a result of this," KTTH radio show host Jason Rantz reported. 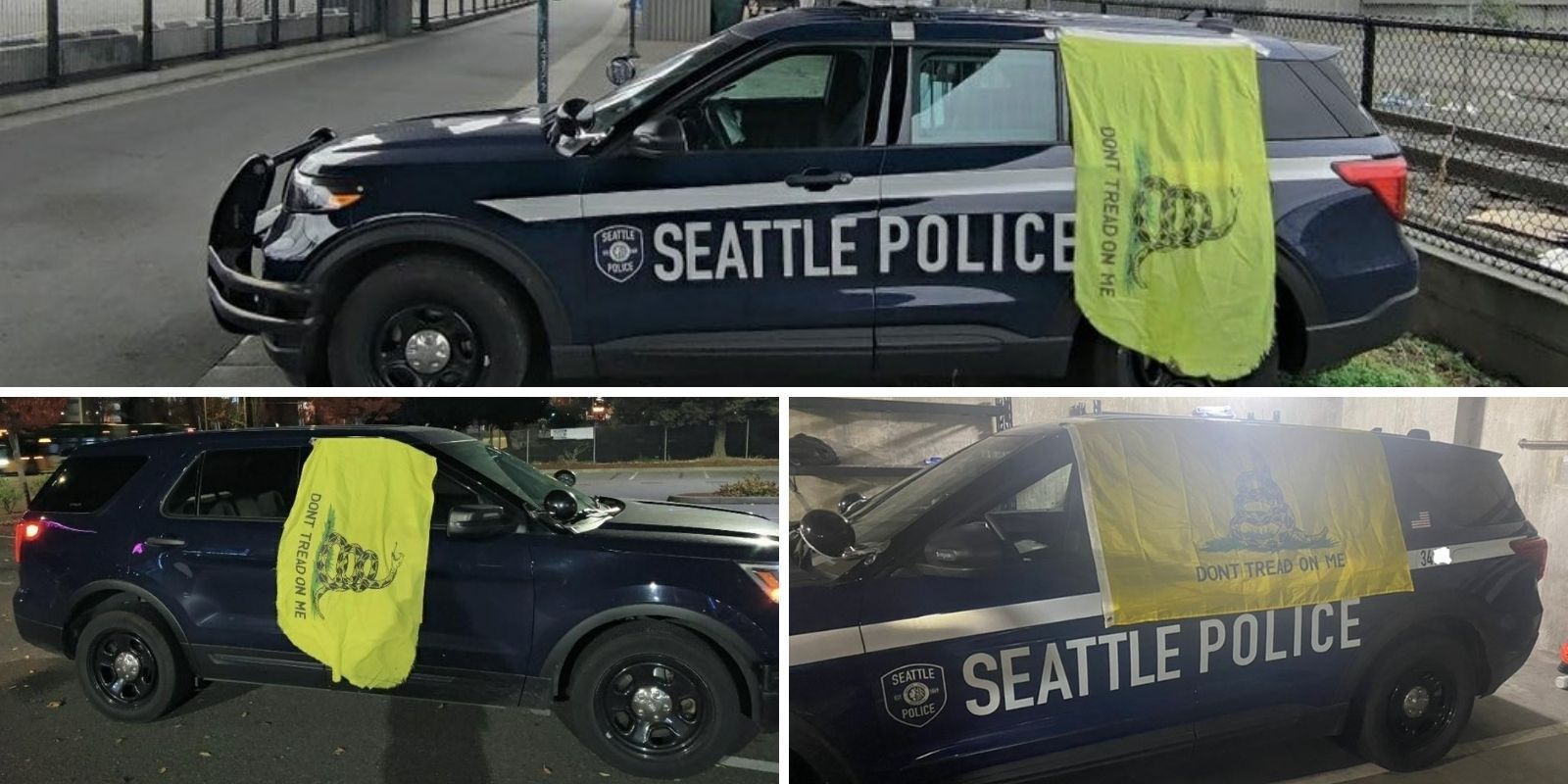 Seattle Police Department officers were photographed with several Gadsden flags brandishing the iconic "Don't Tread On Me" phrase draped over patrol cars in protest of the vaccine mandate for city employees as Monday's deadline arrives.

"Some officers plan on taking time off to decide what they will do long term. They don't seem eager to stay with SPD. Others explained that they are going to leave the SPD by the end of the year as a result of this," KTTH radio show host Jason Rantz reported on Twitter, uploading the photos taken by the officers.

Seattle police officers have united together to fight back against Democrat Mayor Jenny Durkan's vaccination mandate and encouraged each other not to submit vaccination records required to be handed over to the city by Sept. 22.

SPD sources told The Post Millennial that officers across the city's precincts organized efforts to petition for officers not to comply. The coordinated effort, called SPD United, involves vaccinated and unvaccinated officers who both believe in the individual right to medical freedom. The group has placed posters that first appeared in the East Precinct, encouraging officers to "unite."

SPD announced on Oct. 5 that 354 Seattle police personnel had yet to submit vaccination records, 237 of which are patrol officers or work in operations.

Seattle Police Officers Guild president Mike Solan said officers won't face immediate termination but will face a public "Loudermill hearing," where the officers are able to justify why they've refused to comply with the vaccine mandate before formal separation from the force, according to a Washington state union.

The pre-disciplinary hearing is part of the "due process" requirement that must be provided to a public employee prior to removal. Loudermill rights provide a public sector worker the right to a hearing or opportunity to contest the reasons for involuntary termination or severe discipline, Teamsters Local 117 explained.

King 5 News reported that King County Sheriff's employees will be subject to the same process, according to an internal memo from the sheriff's office on Thursday.

Seattle announced its own vaccine mandate in August in alignment with the state's and King County's policies that require all city employees must be fully vaccinated against COVID-19, request an exemption, or face termination by Oct. 18.

A video began circulating on Saturday night across social media showing a Washingon state trooper issuing his final sign-off after he refused to comply with Democrat Gov. Jay Inslee's vaccine mandate for state employees. After his shift, the trooper radioed the operator and announced his resignation after 22 years on the force.

"This is my final sign-off. After 22 years of serving the citizens of the state of Washington, I am being asked to leave because I am dirty. Numerous fatalities, injuries. I've worked sick; I've played sick; buried lots of friends over these years. [I'd] like to thank you guys; I'd like to thank the citizens of Yakima County as well as my fellow officers within the valley. Without you guys I wouldn’t have been very successful; you kept me safe and got me home to my family every night. Thank you for that," trooper Robert LaMay said in the video he filmed of himself.

"Wish I could say more but this is it, so, state 1034, this is the last time you’ll hear me in a state patrol car," he concluded. "And Jay Inslee can kiss my ass."

The radio operator responded, applauding the officer for his work with the force: "State 1034, thank you for your 22 years of service to the citizens of Washington state. You've taken on many roles in your time with the patrol. In your first year, you delivered a baby while on patrol … You've been a theory instructor … peer support member, part of the chaplaincy board … You've been a great role model and a mentor for all the young troopers serving in the area by sharing your knowledge and experience throughout the years. Thank you for your service."

Inslee announced the new COVID-19 vaccine order on Aug. 20, which prohibits "Any Worker from engaging in work for a State Agency after October 18, 2021 if the Worker has not been fully vaccinated against COVID-19."

After the governor announced mandatory COVID-19 vaccinations as a condition of employment for state employees and healthcare workers, the mandate garnered intense pushback and resulted in mass protests throughout the state.

Thousands of residents rallied on the steps of the Washington state Capitol to protest the mandate. Firefighters, law enforcement officers, corrections officers, healthcare workers, and members of the community were in attendance, standing in opposition to government overreach. The crowd sang the National Anthem and chanted phrases such as "Freedom,"We Will Not Comply," and "Recall Inslee."