Seattle police officers fight back against mandates, 'this is medical apartheid'

According to an estimate, there are roughly 200 Seattle police officers that have not yet received the coronavirus vaccination that are subject to being terminated come October 18. 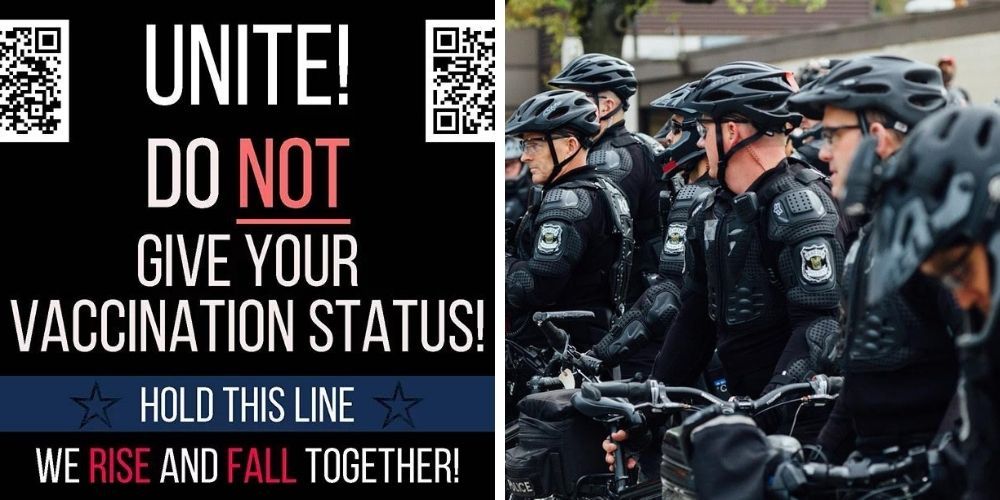 Seattle police officers are uniting together to fight back against Democrat Mayor Jenny Durkan's COVID-19 vaccination mandate and are encouraging each other not to submit vaccination records required to be handed over to the city by September 22 or be subject to termination.

Sources in the Seattle Police Department told The Post Millennial that officers across the city's precincts are organizing efforts to encourage one another not to comply with the vaccination mandate and are petitioning for officers not to hand over their vaccination records to the city.

The pushback is a coordinated effort between vaccinated and unvaccinated officers that both believe in the individual right to medical freedom. The group of officers called SPD United created a website and put up posters that first appeared in the East Precinct, encouraging officers to "unite."

However, within twelve hours of the posters going up, East Precinct Captain Eric Sano allegedly sent an email which ordered the posters to be taken down, according to multiple sources in the department.

On August 9, Durkan announced mandatory coronavirus vaccinations for all city employees, which was announced in lockstep with Democrat Governor Jay Inslee mandating the vaccine for state, health, and childcare workers. Durkan, who won't be seeking reelection this November, is the only mayor in Washington state to mandate the vaccine thus far.

"Vaccines are safe, effective & save lives. City of Seattle employees must be fully vaccinated by 10/18 to help us re-open safely while protecting employees & public. We will evaluate plans based on science + King County Public Health guidance," Durkan said in a tweet.

The removal of the posters in the East Precinct aren't deterring officers from continuing efforts to fight back against the mandate, and according to an officer involved in the pushback, who said they will continue to "hold the line."

According to an estimate, there are roughly 200 Seattle police officers that have not yet received the coronavirus vaccination that are subject to being terminated come October 18.

However, a source within the Seattle Police Department told The Post Millennial that the number of officers to get terminated by either not complying or are unwilling to submit their private medical data is closer to 300, which exceeds 20 percent of the deployable officers and will decimate what remains of the Seattle police force.

As a result, "a lot more officers will leave Seattle PD because there will be unsafe levels of police on the streets" to effectively keep both officers and the community safe, an officer said. Close to 300 officers have already left the department in 2021 in the wake of demonization and ongoing defunding efforts by the city council.

SPD United's mission statement on their website said, "This mission is one of human rights, constitutional rights, civil liberties, and freedom of choice."

"We all must band together in our stance for freewill, personal choice, medical freedoms and consent without coercion, retaliation, harassment, disciplinary action, or termination. This is not about being pro-vaccine or anti-vaccine. This is about you having a choice."

"The freedoms of police officers have been and continue to be stripped away, one by one. Officers had to forgo their 4th Amendment rights and provide the City with personal cell phones, bank records and more, all without a search warrant and under no formal criminal investigation by those who coerced officers to provide it. Now, all are being required to give up personal social media accounts to the WSCJTC, upon request. Finally, they have demanded private medical information so they can divide the department by those who are vaccinated and those who are not (for legal religious and medical reasons). This is medical apartheid, and as it actively tears our society apart, it will certainly do the same for SPD."

Since vaccination requirements were announced on August 9 by Inslee and Durkan, thousands of state workers have voiced their opposition in protest, including firefighters, law enforcement officers, health care workers, teachers, and child care workers. Washington state's vaccination mandates are among the strictest in the country, providing no option for employees to get periodically tested in place of the vaccination.