Those in attendance included firefighters, law enforcement officers, corrections officers, healthcare workers and members of the community that said they are against government overreach. 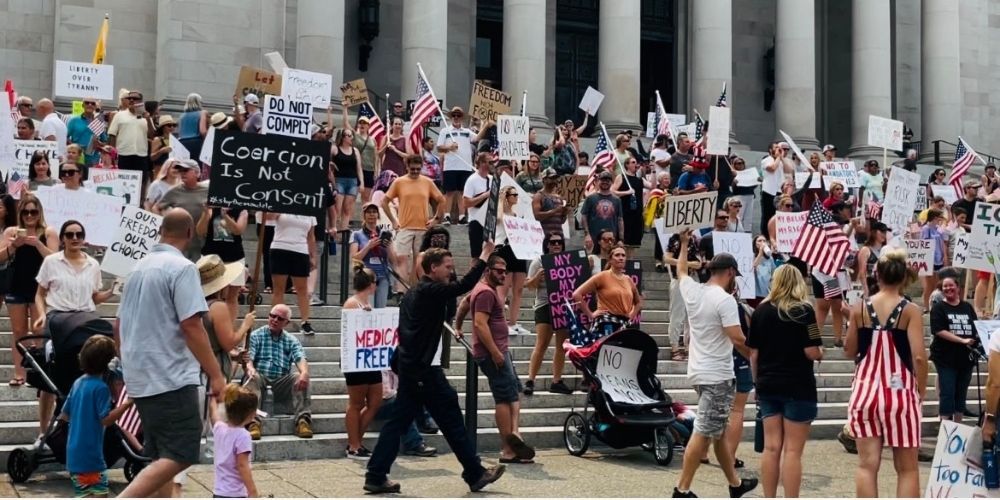 Democrat Governor of Washington Jay Inslee announced mandatory COVID-19 vaccinations as a condition of employment for state employees and healthcare workers during a press conference last week. The mandate has since garnered intense pushback from across the aisle and has resulted in mass protests throughout the state.

"Today I'm announcing that I will require state employees and workers in private health and long-term care settings to be vaccinated as a condition of employment. Individuals covered by this order will have until October 18 to be fully vaccinated," Gov. Inslee said on Twitter.

Thousands of citizens rallied on the steps of the Washington State Capitol last Friday to protest the forced vaccination mandate. Those in attendance included firefighters, law enforcement officers, corrections officers, healthcare workers and members of the community that said they are against government overreach.

The crowd sang the National Anthem in unison on the steps of the Capitol and chanted phrases such as "freedom, "we will not comply," and "recall Inslee." The common message throughout the protest was that individuals should be granted medical freedom and that required vaccination mandates set a worrying precedent for the future.

During a press conference on Wednesday, Governor Inslee and Superintendent of Public Instruction, Chris Reykdal, announced new vaccination requirements for educators. "COVID cases are skyrocketing, in large part due to the Delta variant. The best way to protect everyone is to get vaccinated and wear a mask. Today I announced a vaccine requirement working in K-12, most childcare and early learning, and higher education," Governor Inslee said on Twitter.

Governor Inslee said his decision to force further mandates was large in part due to the fact that children under the age of 12 are still unable to receive the vaccine and said, "We won't gamble with the health of our children." The mandate affects K-12 educators, staff, coaches. He also reinstituted indoor mask mandates regardless of vaccination status.

Individuals from all different occupations, political beliefs, and backgrounds joined together outside the Capitol building to provide pressure on Governor Inslee as he was briefing the press. Worried their voices weren't being heard, the group moved its way inside the Capitol and protested outside the Governor's office.

Governor Inslee refused to address the crowd which had many in attendance upset because the mandates that he ordered are forcing them to lose their jobs. The crowd remained peaceful throughout the protest and dispersed without incident. They say they will be back to protest at the Capitol this weekend.