ShutDownDC, a group that organizes mass demonstrations that often target Supreme Court Justices, planned out their next move in a Twitter post on Monday. 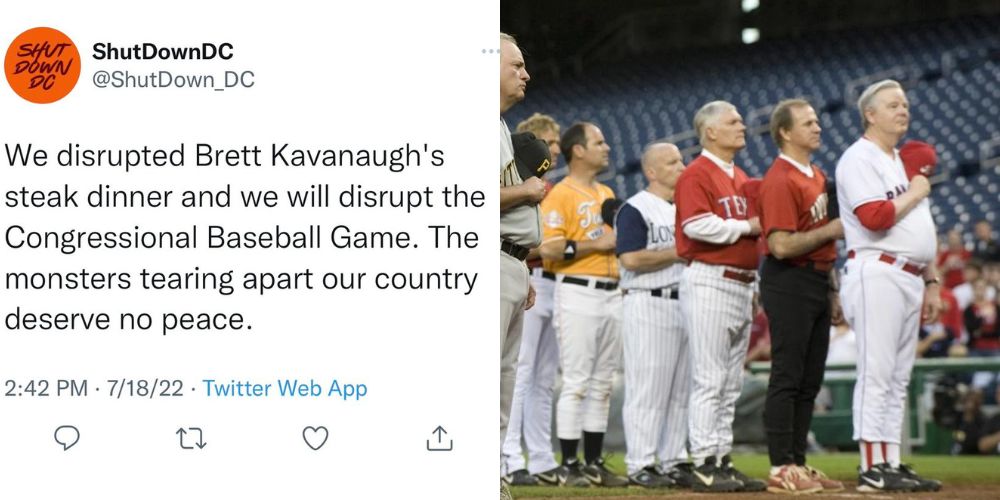 ShutDownDC, a group that organizes mass demonstrations that often target Supreme Court Justices, planned out their next move in a Twitter post on Monday.

"We disrupted Brett Kavanaugh's steak dinner and we will disrupt the Congressional Baseball Game. The monsters tearing apart our country deserve no peace," ShutDownDC said.

Earlier this month, conservative Justice Brett Kavanaugh was forced to leave a Steakhouse after activists with ShutDownDC protested outside.

According to Politico's Daniel Lippman, the protesters received a tip that Justice Kavanaugh was dining out at Morton's, arrived out front, and called the manager to demand Kavanaugh be thrown out of the establishment.

"We hear Kavanaugh snuck out the back with his security detail. @mortons should be ashamed for welcoming a man who so clearly hates women," ShutDownDC wrote on Twitter.

Kavanaugh "ate a full meal but left before dessert" and "Morton's was outraged about the incident," Lippman reported.

ShutDownDC's website contains a "Learn" tab which includes training in "Civil Resistance," a practice aimed at confronting figures in public and is described as "knowing how to confront power and how to protect each other."

Conservative Supreme Court Justices have been targeted by activists and Democratic leaders for their decision to overturn Roe v. Wade, which sent abortion legislation back to individual states.

In June, Kavanaugh was the target of a botched assassination attempt and has had prolonged protests outside his home for months. ShutDownDC have been seen on video protesting outside his home.

The Supreme Court has requested that states start cracking down on these illegal protests.

The Congressional Baseball Game kicks off on Thursday, July 28 at Nationals Park in Washington D.C. The annual bipartisan event has been around since 1909, where members of the United States Congress from each party get to solidify friendships off the floor and on the field, according to their website.