"Should it matter to us what we call students as long as they're learning, right?" 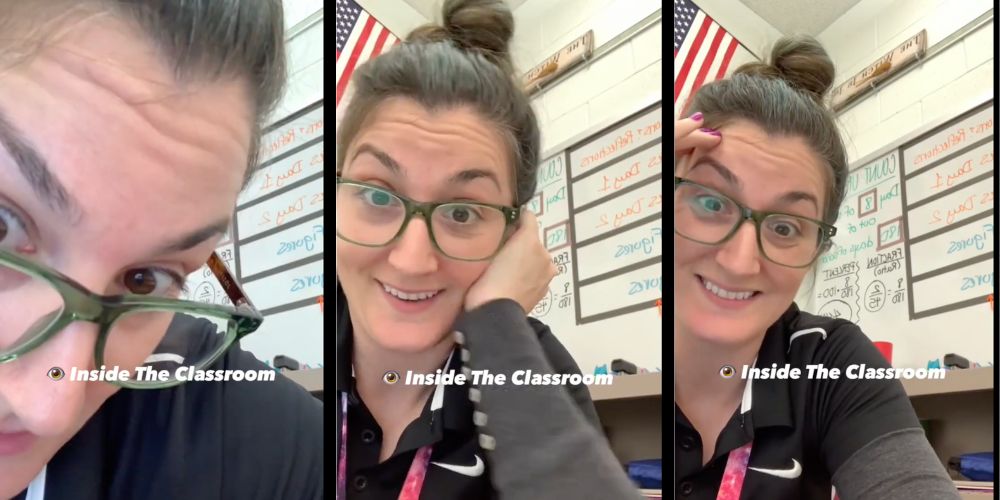 An unidentified middle school teacher at Troy Middle School in Plainfield, Illinois took to her social media to explain that she likes to strengthen her bond with the children in her class by keeping secrets from their parents, especially if they tell her they are transgender.

In a clip posted by Inside the Classroom on Twitter, the bespectacled educator says of her students, "I respect their name and their pronouns, and I use them in class, but because their parents don't know—I even say this to the students—I say, 'I'm gonna have to use your legal name and pronouns when addressing your parents, okay?' And this usually, again, strengthens the bond, the trust bond between me and the kid."

The teacher begins her video by saying, "I may or may not have ruffled some feathers in today's team meeting."

"So here's the situation. We've got kids that are trans, in our classrooms, and they are feeling safe enough around us," the school teacher said. "And there's a particular student that has been brought up in team meetings. And the reason being is because their parents do not know that they are trans."

The middle school teacher said she had to throw in her "two cents" and it got a "little heated."

"Should it matter to us what we call students as long as they're learning, right?" She asked but another teacher, a parent, told her "if my kid asks you to use a different name and pronouns and then you don't tell me you're not honest with me, you don't tell me that that's what they're doing. And they've told you that I don't know. I would be pissed."

Hundreds of school districts across the country have adopted guidelines telling educators that they should affirm their students' gender identity revelations and even keep that information secret from parents and guardians. Whether officially adopted by their school or not, an epidemic of teachers grooming children into radical gender ideology has taken root in recent years.

Further, a torrent of cases have emerged of teachers keeping secrets from parents concerning minor children. One teacher, Samson Widerman, gave tips on social media to other teachers, such as the one from Troy Middle School, on how they can help keep their students' 'gender identities' secret from parents.

The teacher continued on to state that if a parent does not "affirm" their child's gender identity, then they are putting them at a higher risk for suicide.

Earlier in August, Leor Sapir, a Fellow at the Manhattan Institute, broke down the data about suicide rates in trans-identifying youth and debunked the activist narrative that preventing children from accessing drugs, hormones, and surgeries to "affirm" their transgender identities will cause them to commit suicide.

Sapir's research actually demonstrate that the hyperbolic rhetoric about suicide rates may actually do more to increase suicide than prevent it.

In June, a study by the Heritage Foundation showed that suicide rates actually increased among youth who identify as transgender in states that allow minors to receive puberty blockers and hormone treatments.

Data from the Gender Identity Development Service (GIDS), the world's largest clinic treating transgender-identified youth, shows that patients treated at or referred to the clinic are at an estimated 5.5 times greater risk of committing suicide than the general population of adolescents. While some research demonstrates youth who identify as transgender have an elevated risk for suicidality, even the CDC demonstrates there is no correlation between children being given gender-affirming medical treatments and a decrease in that suicidality.

She ended her video by saying she is like a doctor and does no harm. She also said she would "exit teaching" if a law was passed that prevented her from keeping secrets with children from their parents.