Libs of TikTok wrote, "Hell no. I’ll never forget what the Democrats did- how they destroyed thousands of lives by forcing school/business closures, people died alone in hospitals while nurses danced because they didn’t allow visitors, thousands lost their jobs for refusing a vax, list goes on and on." 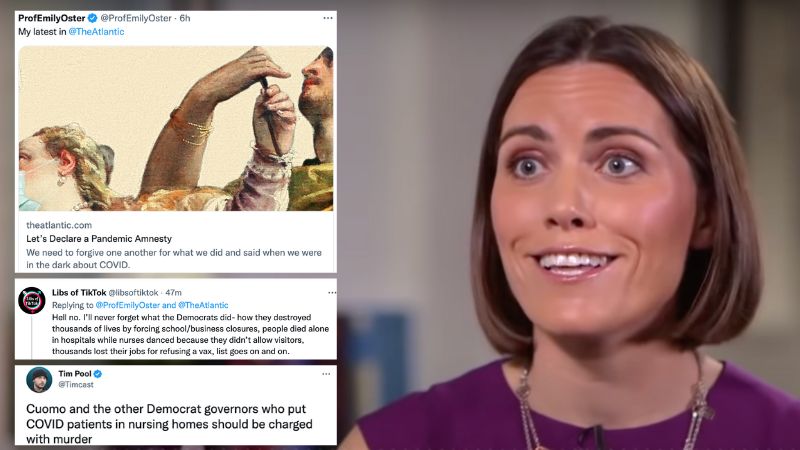 A new article in the Atlantic published Monday titled "Let's Declare a Pandemic Amnesty" by Emily Oster makes the case that members of the establishment media and so-called "experts" should be forgiven for pushing measures such as social distancing at all times, wearing cloth masks outdoors, and draconian and cruel mandates for school children that left America's youth permanently behind in their education.

On Twitter, many of the people who questioned or outright condemned all of those measures in 2020 are calling Oster out on her request. Jesse Kelly wrote, "Take your 'COVID amnesty' thoughts and shove em somewhere. Don’t ever say that to me again. There must be a reckoning. I will not let it go. I will not leave peacefully with people who allowed their fear to turn them into subhumans. No amnesty."

Libs of TikTok wrote, "Hell no. I’ll never forget what the Democrats did- how they destroyed thousands of lives by forcing school/business closures, people died alone in hospitals while nurses danced because they didn’t allow visitors, thousands lost their jobs for refusing a vax, list goes on and on."

Many others let Oster know their thoughts on amnesty.

Citizen Free Press and others were quick to highlight how fanatic Oster was at the time about strict measures.

Oster, who claims on Twitter to be "Unapologetically Data-Driven," wrote how one of her kids yelled "SOCIAL DISTANCING!" at a stranger during the height of the pandemic while she and her family took a hike outdoors breathing through homemade cloth masks. The data-driven excuse for her behavior: "We didn’t know."

But we did. In February 2020, "People are racing to buy face masks amid the coronavirus outbreak, but they probably won't protect you from illness" was published at Business Insider. Many outlets generated similar reporting and even Dr. Fauci was against masking before changing his mind, and then this year changing his mind again.

Megan Basham noted, "This is where you go when you realize you have no defense left."


For Oster, beyond her lacking a rudimentary knowledge of aerosolized particles that can be obtained in high school biology class, she seemingly refused any heuristic approach to the virus, which included her thoughts on schools.

"There is an emerging (if not universal) consensus that schools in the US were closed for too long," she writes.

"The latest figures on learning loss are alarming.  But in spring and summer 2020, we had only glimmers of information," she adds, falsely. As BMJ journal noted in the summer of 2020, Children were neither Covid super spreaders nor were particularly vulnerable to the harmful effects of the disease, even if contracted. Oster later claims she was an advocate of schools reopening earlier than most of her peers but doesn't specify when exactly.

Oster begs for amnesty over a litany of obtuse decision making that she and many technocrats engaged in but says, "most errors were made by people who were working in earnest for the good of society."

This line of hubris reveals the entire corruption of the elite class, as the confidence that she and others did it "for the good of society" doesn't clarify why she or anyone else who decided Covid protocols could be arbiters of public good and then push that "good" down the throats of the country, resulting in cataclysm for schools, social comity, and the economy.

"Economist @ProfEmilyOster wants us to move on from Covid debates. But economists never had any Covid debates! In March 2020 leading economists reached a false consensus that lockdowns were a free lunch. Dissenters were outcasted as 'grifters' who should be 'embarrassed'," noted one economist.


Oster's article reveals a deeper, pernicious problem in our culture. She touts herself as "data-driven" but her own words reveal a series of decisions berefect of logic and common sense. Data science is an outgrowth of calculus and heavily relies on the principle of "fuzzy logic." This principle accounts for how the manipulation of data and statistics often has vague boundaries as the work is conceived without a constant  upon which to root or compare conclusions. In other words, data science is more akin to astrology, a process that can use facts to make conclusions entirely devoid of truth to further an agenda or goal.

Oster repeats ad nauseam that there was too much "uncertainty" to buck the top down mandates coming from the likes of Anthony Fauci, whose transparent lies may have consequences in the near future. Senator Rand Paul, who was censored in 2021 for saying cloth masks were ineffective, has promised to hold Fauci accountable.

Professional doxxer Taylor Lorenz on the other hand is not asking for forgiveness and instead promising to reshape the world to her whims one tweet at a time.

"I am so sick of people organizing indoor, unmasked events w/ zero covid safety precautions using disabled/sick family members or friends as a cudgel to abdicate responsibility for keeping attendees & workers safe. If my family member did this I'd be livid," Lorenze writes.

Lorenz added, "I'm pretty open on here about being severely immunocompromised, if ur inviting me to an indoor, crowded event with ZERO precautions, I'm going to call u on it. Not all medically vulnerable ppl have the platform I do, or the ability to say no to stupid press events and conventions."