The activist called Ngo, who is of Vietnamese descent, a "cracker," as well as "f*ggot." 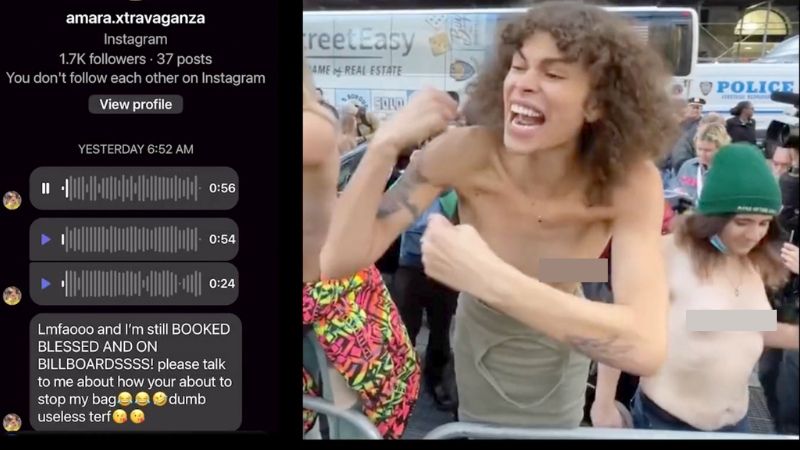 Along with Antifa and other far-left activists, trans-identified male model Amara Velasquez got out-of-control at City Hall Park in Manhattan while counter-protesting against women who they deem to be "TERFS," which stands for trans-exclusionary radical feminist.

According to a press release on the Stop Female Erasure website, women's rights activist Kellie-Jay Keen's "Let Women Speak USA 2022," tour arrived in NYC on November 14, aiming "to reach people who have begun to recognize government and media disinformation regarding the medicalization, sterilization, and mutilation of sex stereotype nonconforming children receiving puberty blockers and genital mutilating surgeries in the name of so-called 'gender-affirming' care."

During previous stops in Keen's national campaign, she and her supporters have been attacked.

Timcast News posted the viral footage from the event.

"TERFS go home! TERFS go home!" the transgender and left-wing activists chanted, while waving signs that read messages such as "NO TERFS, NO FASCISTS," and "TRANSPHOBES GTFO."

The counter-protestors grew more aggressive, proving challenging for the NYPD to keep separated from Keen's rally. A fight broke out, and they began making arrests, reported Timcast.

The Post Millennial's Ngo re-shared more footage from the event, which showed two aggressive trans activists threatening to beat up the women, and identified Velasquez as one of them.

"Hi f*ggot. Just sending you a little message today because another girl from the UK said she knows where you live," Velasquez began. "And it's funny, because I have connections in the UK too. I'm about to run up on your a**."

Velasquez, who models for the brand Coach, then bragged about having the blessing of the fashion company's owner to threaten people at protests.

"Also, you posting on Twitter does absolutely nothing. You're a nobody. You're a f*ggot. You can never stop my bag," the crazed extremist said. "I'm best friends with the owner of Coach. he already done messaged me about your crazy a**. You think that he would put trans women in his fashion show, And then think twice about that decision? You f*cking idiot."

"I'm on a billboard in Times Square," Velasquez continued to brag.

The Coach model went on to accuse Ngo, who is of Vietnamese descent, of being a "cracker."

"When you wake up, you're a cis, white, cracker-a** man who doesn't know who the f*ck he is. You have a very insecure attachment theory baby. Go back to school, and learn about it."

Velasquez then went on to brag about being a graduate of the University of Connecticut.

"Learn about your attachment theories because this sociologist graduated from UConn, the best school in Connecticut."

After several more explicit words for Ngo, Velasquez admitted to assaulting a woman at the event by spitting at her, and called biological females "men" and "ain't sh*t."

"I f*cking hocked a loogie right in your girl's face – right in that man's face – these men that you say are f*cking women. Cis women ain't sh*t. The TERFS that you f*cking protect – and you – are going to rot in hell, and I'll be the first to send you there. Fucking Andy 'N-go.' Get a real f*cking last name!"

Ngo shared the audio messages to Twitter, where he tagged the New York branch of the FBI.