Ontario pizza chain Gino’s Pizza has been embroiled in a scandal with the LGBTQ community after a customer was referred to as a faggot by a Gino’s employee. 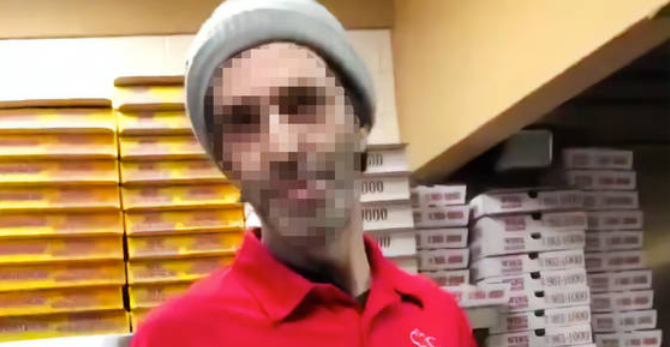 Ontario pizza chain Gino’s Pizza has been embroiled in a scandal with the LGBTQ community after a customer posted a video on Twitter of him being referred to as a f*ggot by a Gino’s employee after an altercation of which the root cause is still not entirely known according to Blog T.O.

Jeremy Mizu, filmed the Gino’s Pizza employee in what appears to be mid-way through their altercation at a Young and Eglinton location on Friday night. Rob Gill is a local LGBTQ rights advocate who shared the video on his Twitter the following morning, writing that Mizu had been denied service for “being gay” and that a homophobic slur had been said to him.

Mizu retweeted the clip with the caption, “Last night I was called a f***ot and told to leave store because I opened the door and it was cold,”

“This is the worker after the manager had been standing up for him. Here he is calling me a f*ggot and smirking.”

The video shows a Gino’s Pizza employee standing behind the restaurant’s counter arguing with Mizu, it’s not clear why the two men are arguing and it’s difficult to understand what the employee is saying in the beginning.

“Yeah, I can film here, I’m allowed,” says Mizu to the pizza shop worker at one point.

“You are?” the Gino’s employee responds. “Because you are a f*ggot?”

The employee then proceeds to walk away after utter the homophobic slur. Someone else in the restaurant can be heard asking Mizu and his friends to leave.

Mizu gave his rendition of the events claiming that the employee was upset that he’d opened the store door. “I opened the door once,” said Mizu later on Twitter in response to someone who said that the staff member “was just pissed that he was coming in and out of the store.”

“The Irish girls were with me and were telling the manager how it’s unacceptable and we want a refund,” he continued. “They did not give us said refund.”

“But either way to call me a faggot several times for opening the door? Still unacceptable.”

Gino’s Pizza issued a statement of apology following the incident.

“After being altered to this situation by the Twitter community, Gino’s Pizza management has been investigating this issue,” reads the statement. “This was clearly a violation of our staff conduct policies and code of ethics that all of our employees must adhere to.”

“We take this matter extremely seriously and as a result the employee involved has been terminated,” the statement continues.

“Gino’s Pizza is a supporter of the LGBTQ community and apologizes for the actions of this former employee.”