Who is running for Prime Minister?

Two years after the last federal election, Canadians are once again heading to the polls. 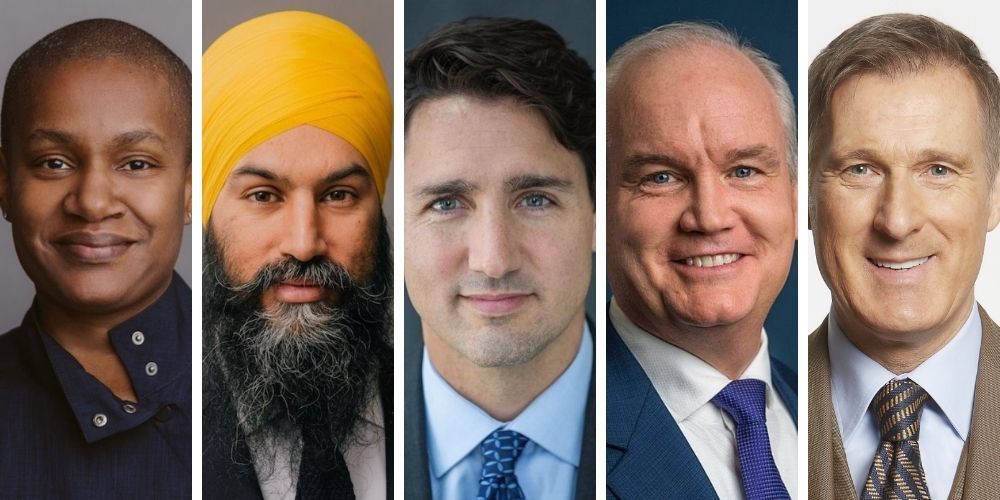 Two years after the last federal election, Canadians are once again heading to the polls. This is conventional for most minority governments, as no one party has a clear mandate to govern. Despite Prime Minister Justin Trudeau not facing any significant challenges in passing legislation nor a nonconfidence vote during Budget 2021 and the Throne Speech, he called an election for September 20, 2021.

Contending parties have five weeks to keep the reigning Liberal Party from forming a majority government, which sits at 157 seats — 13 seats from majority territory. Should any of these parties prove successful, Canada will have a new prime minister.

With that in mind, who is running for Prime Minister?

Justin Trudeau is the MP for Papineau and the leader of the Liberal Party. He is the 23rd Prime Minister of Canada. First elected in 2015, he not only made history as the youngest elected prime minister, but he is also the son of former Prime Minister Pierre Trudeau.

In his father's footsteps, Justin is a progressive and highly controversial leader. His tenure has been marred by numerous scandals and ethics violations. Such controversies include accepting lavish trips from lobbyists, attempting to influence a prosecution of SNC-Lavalin and giving over $900 million to a charity run by executives close to his family.

Beyond alleged corruption and ethics violations, Trudeau made global headlines in the 2019 election after old photos emerged depicting the prime minister in blackface. This news was prolonged because multiple images kept appearing, and Trudeau himself could not confirm how many times he had worn blackface.

Despite the controversy, Trudeau successfully won the 2019 federal election but was reduced to a minority. Just two years after that election and across the span of an entire pandemic, Trudeau has called for a snap election.

Erin O'Toole is the MP for Durham and the leader of the Conservative Party. A former officer for the Royal Canadian Air force, O'Toole was first elected to Parliament in 2012.

He was appointed the Parliamentary Secretary to the Minister of International Trade and then became the Minister of Veterans Affairs in 2015. O'Toole then ran for a leader in 2017 but came in third behind former MP Maxime Bernier and former leader Andrew Scheer. Finally, O'Toole won the leadership in the summer of 2020 and has led the party since.

A moderate conservative, O'Toole is the first pro-choice leader of the Conservative Party. He is also pro-LGBTQ rights and, most notably, for a carbon tax. The latter stirred controversy from the base, as O'Toole pledged to never run on a carbon tax during the leadership race.

While his moderate positioning on issues has angered the conservative base, it remains to be seen whether swing voters become attracted to the rebranded Conservative party.

Jagmeet Singh is the MP for Burnaby South and the leader of the New Democrat Party. A relatively new leader, Singh held on through a difficult 2019 election and is now preparing to turn the tide against Trudeau.

Ideologically, Singh is a progressive and social democrat. During the pandemic, Singh managed to influence the minority government and leverage policies.

Jagmeet Singh is notably the most likeable leader. According to multiple polls, Singh tops just about every demographic when it comes to likeability. This is serving the NDP well as the party has struggled financially and electorally since the passing of Jack Layton.

Yves-François Blanchet is the MP for Beloeil—Chambly and the leader of the Bloc Québécois. Despite being included on this list, Blanchet and the Bloc are not able or interested in actually forming a government. The Bloc is a Quebec nationalist party and is exclusively running candidates in the 78 seats of Quebec.

Before federal politics, Blanchet was in provincial politics, serving as a Member of the National Assembly (MNA) for the Parti Québécois (PQ) from 2008 until his defeat in the 2014 election. Blanchet served as Quebec's Minister of Sustainable Development, Environment, Wildlife and Parks from December 2012 to April 2014 under Premier Pauline Marois.

The Bloc Québécois is to play a powerbroker position in the federal government and advocate for Quebec issues. These range from mutually essential problems to the entire country, such as the environment, and Quebec-centric matters, such as sovereignty.

Annamie Paul is a newcomer to the leadership stage. She became leader of the Green Party in 2020, replacing longtime leader Elizabeth May. She is the first Black Canadian and first Jewish woman to be elected leader of a federal party in Canada.

Her relatively short tenure as a leader has not been without controversy. The Green movement in Canada has been divided within its ranks about Israel, and this strife played a significant role in damaging her leadership and the party. Although much is unknown, it is understood that the backroom powers of the Green Party have attempted to remove Annamie Paul as a leader. This was a consequence of Paul's support of Israel and Fredericton MP Jenica Atwin's exit from the party.

Angered by a seemingly internal coup, Paul called out Justin Trudeau as a "fake feminist." Trudeau's part in this is related to the fact that the Liberal Party allowed Green MP Jenica Atwin to defect to their side.

Despite a chaotic tenure, Paul has sustained her leadership and is determined to run an entire campaign.

Paul is also the only federal party leader who is not an MP but whose party has representation in the House of Commons. She plans to run again in Toronto Centre in the upcoming election. The party recently revoked $250,000 in funding earmarked for her campaign, but she insists that momentum grows as she canvasses the area daily.

Although it ran candidates in almost all ridings in the 2019 election, the PPC failed to secure any seats, including Bernier's riding. The party garnered just over two percent of the national vote.

Following the 2019 election, Bernier ran in the York Centre By-Election, where he came in fourth with 3.56 percent of the vote or 642 votes.

Since then, however, the PPC has surged in the polls as the party successfully built a new base with anti-vaccine mandate groups. Several polls now show the PPC above five percent. It remains to be seen whether Bernier can retake his old seat and turn the PPC into a legitimate political player on the national stage.