"Y'all don't know sh*t about what it takes to live in a box here," the BLM co-founder said. 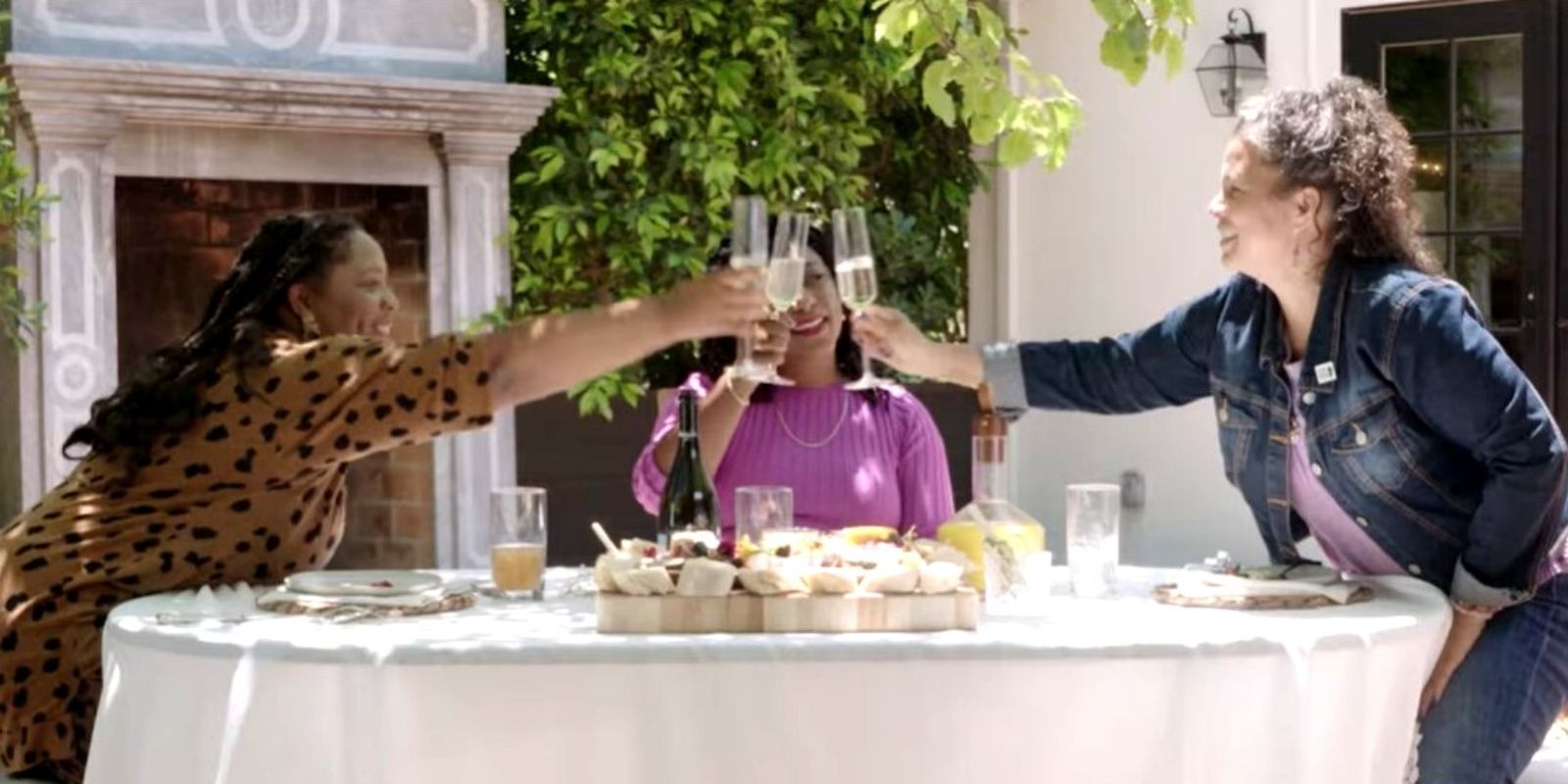 Following news that Black Lives Matter leadership has been using its funds for personal luxury as opposed to re-investing in the movement, an Intelligencer investigation reveals the group's top brass bought "a secret" $6 million house.

The clandestine residence, nicknamed "Campus" by internal figures, caught the eye of Intelligencer who shines a light on the attempted media cover-up surrounding the latest controversy facing BLM's most-visible organizers.

The women, enjoying bubbly drinks and a fancy charcuterie board, were recording a BLM roundtable ," allowfullscreen>

Cullors referred to an April 2021 article in the New York Post that uncovered she went on a mansion buying spree, spending millions on the purchase of four homes. She has insisted she's the "fall guy" over the organization's financial scandals.

"For me, the hardest moments have been the right-wing-media machine just leveraging literally all its weight against me, against our movement, against BLM the organization," Cullors said. "I'm some weeks out now from a lot of the noise, so I have more perspective, right? While I was in it, I was in survival mode."

Cullors, resigning in pursuit of a multi-year TV deal and a second book in the works, stepped down as executive director of the organization's Global Network Foundation on May 27, 2021, within days of the patio conversation.

"She bought some damn houses. We gonna cancel her," Abdullah parroted critics at another point during the spring-time chat. Garza jumped in, addressing detractors: "Y'all don't know sh*t about what it takes to live in a box here."

Intelligencer writer Sean Campbell notes that the house sitting behind the women is far from a box, carrying over 6,500 square feet, more than half a dozen bedrooms and bathrooms, multiple fireplaces, a soundstage, a pool and bungalow, and parking for 20-plus vehicles, according to real-estate listings.

Intelligencer says that the transaction has not yet been reported and that "Black Lives Matter's leadership had hoped to keep the house's existence a secret."

Documents, emails, and other communications Campbell has seen regarding the massive property's purchase and day-to-day operation suggest that the hushed buy of the pricey residence has been "handled in ways that blur, or cross, boundaries between the charity and private companies owned by some of its leaders."

Campbell grilled the organization on March 30 with questions about Campus. Leaders circulated an internal strategy memo with possible responses, ranging from "Can we kill the story?" to "Our angle — needs to be to deflate ownership of the property," according to Campbell. The memo in question includes bullet points explaining that "Campus is part of cultural arm of the org — potentially as an 'influencer house,' where abolition+ based content is produced by artists & creatives." Another bullet is headed "Accounting/990 modifications" and reads in part: "[N]eed to first make sure it's legally okay to use as we plan to use it."

The memo describes the property as a so-called "safehouse" for BLM leaders whose safety has been threatened. Campbell points to flaws in the organization's reasoning, noting that the house is billed as a confidential refuge yet acts as a scenic backdrop for broadcasting to a wide audience. The memo even acknowledges: "Holes in security story: Use in public YT videos."

BLMGNF board member Shalomyah Bowers said in an email statement on April 1 that the organization bought Campus "with the intention for it to serve as housing and studio space for recipients of the Black Joy Creators Fellowship."

In an exclusive with NewsOne, the BLMGNF said the dubbed Creator House will provide living spaces for artists to be in residence as well as communal spaces for collaboration. There will be a recording studio and production space on-site set up for artists and creatives to film, host live performances, garden, and mediate.

Bowers said in the statement that BLMGNF had "always planned" to disclose the house via legal filings in May, stressing that it does not serve as anyone's personal residence and that purchasing property via private LLCs is customary in real estate as a way of protecting assets from litigation and liability, per Campbell.

However, the BLMGNF statement did not address why relatively little content has been produced there over the course of 17 months if the house was first intended to be a creative space, Campbell observes. "Even if everything about the house is above board, the general air of secrecy is out of step with the transparency that is expected of charitable or tax-exempt organizations," Campbell remarks.

to YouTube titled "I Try Baking a Family Recipe for the FIRST Time *INTENSE*" which is the first in a series called "Patrisse Tries" that showcases the BLM co-founder attempting unfamiliar tasks in vlogging fashion. Cullors prepared a peach cobbler at the Campus kitchen island, using its soapstone countertops and high-end appliances.

The financial manager for Janaya and Patrisse Consulting, an LLC co-run by Cullors and her spouse, who also is the chief financial officer for a nonprofit led by the father of Cullors's only child, purchased the seven-bedroom house in 2020.

Within a week, ownership of the house was trasnferred to an LLC established in Delaware by the law firm Perkins Coie. The maneuver ensured that the identity of the property's new owner was not disclosed to the public, according to Campbell.

After the transfer, the property's upkeep, including cleaning, pool maintenance, security, was handled by a loose mixture of staffers working for BLMGNF, Janaya and Patrisse Consulting, the Bowers Consulting Firm, or other entities. Campbell details messages from a Signal text chat named "BLM Security Hub" on the secure-messaging platform where around two dozen participants from the aformentioned bodies commingle. Internal records indicate Cullors's mother was approved for a cleaning job at Campus and that Cullors's sister signed a similar nondisclosure agreement as other employees had to at the property, Campbell found.

Nonprofit experts told Campbell that cross-pollinating resources might jeopardize the charity's tax-exempt status. University of Notre Dame Law School professor Lloyd Hitoshi Mayer said the details of the house's management deserve closer scrutiny. If there are issues with the group's tax filings, there could be civil and criminal liabilities for the individuals and organizations involved. Mayer said that investigations by state and federal agencies could be warranted as well.

Other conversations Campbell discovered in the Signal chat show efforts to monitor social media for negative mentions of BLMGNF. Some members utilized their influence with the Big Tech platforms to censor such negativity. Another chat log reveals Bowers and his associates directing a private investigator to look into BLMGNF's opponents and prying journalists, including Campbell.

Back in the patio video, the three BLM leaders chastised skeptics. "Who the f*ck are you? You ain't done shit," Abdullah said. Garza said she discredits criticism from those she doesn't know on personal level. "I don't need to be accountable to you," Garza said. "I don't know what accountability looks like with people that I don't know and have never talked to." Cullors recounted to the other women: "My therapist told me, she said, 'What you've been through, most people would not survive' … And I don't feel like I'm just surviving. I feel like I'm really thriving."

Cullors, Garza, and Abdullah have been known by many as the public heads of the activist organization's seemingly invincible hydra. On-the-ground activists have been voicing concern about how donations are spent, calling for greater financial transparency and an explicit digital or paper trail of where the money flows.

Frustrations continue to mount over the group's apparent shady acquisitions. Meanwhile, families of some police-violence victims have complained that they've seen little of the funding going towards purported causes and demanded that the names of the deceased no long be used to promote BLM fundraising.