Eskamani apparently thinks that online stores should ban sellers that are adamantly opposed to sexualizing children in classrooms. "Shopify do you have a response?" She asked. 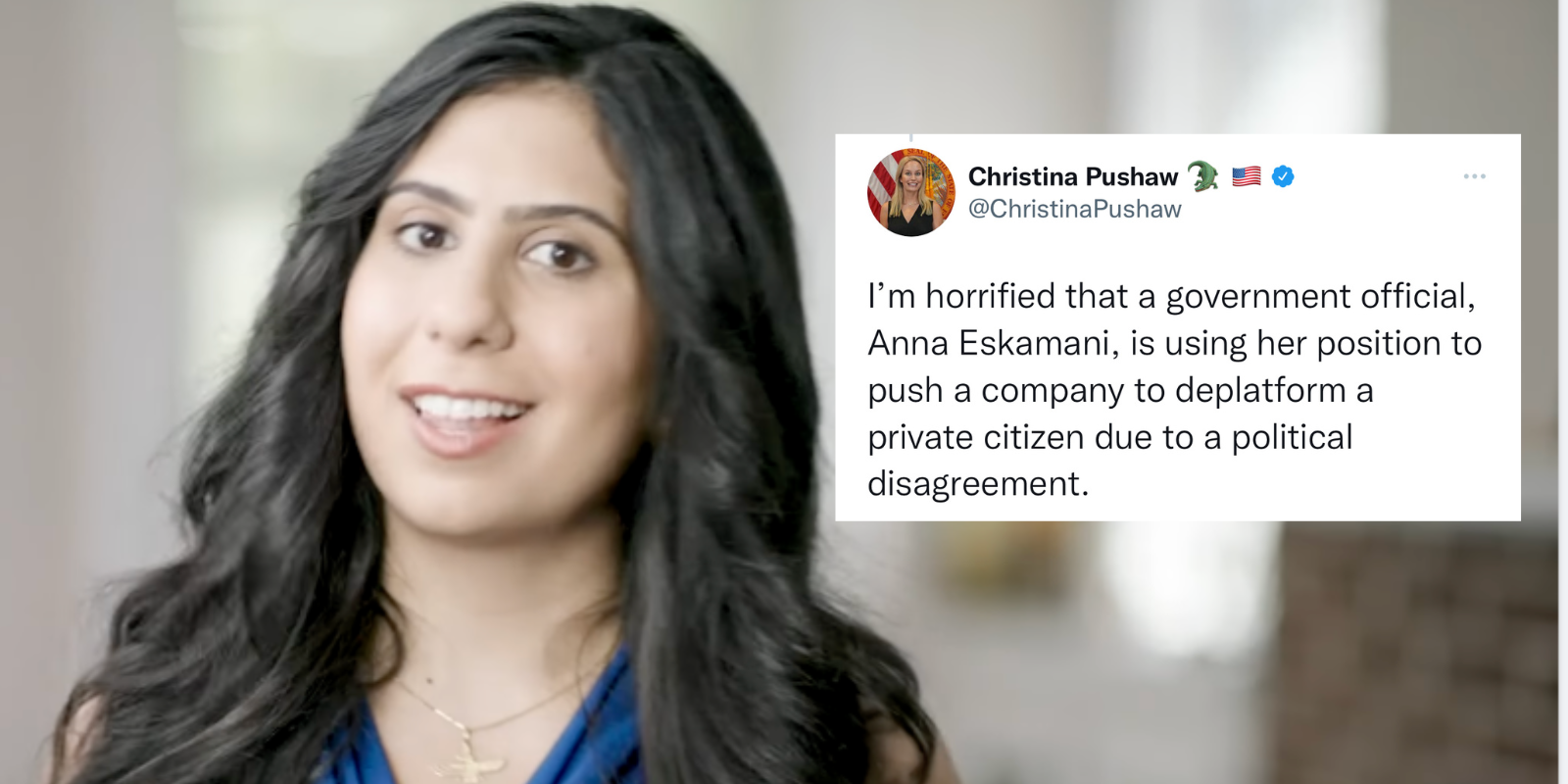 A member of the Florida House of Representatives has asked a popular online store to prevent Libs of TikTok from selling merch on the platform. The reason? Libs of TikTok offered the term "groomer" as a promo code in the online shop, and "groomer," apparently and as of last week, is a slur against the LGBTQ community.

Anna Eskamani, who represents Florida's House District 47, piled on to a demand to get popular Twitter account Libs of TikTok banned from selling merch in Shopify's online store over the term, which oddly enough has been linked to the LGBTQ community by members and supporters of that community itself.

Florida's Press Secretary Christina Pushaw said that she was "horrified that a government official, Anna Eskamani, is using her position to push a company to deplatform a private citizen due to a political disagreement." And indeed, it does seem that the place of an elected official is not to petition corporations to ban users from its platform that are engaging in legal commerce.

The beginning of the petition to ban Libs of TikTok from selling merch on Shopify began with a Media Matters article that made the wild claim that the term "groomer" is an LGBTQ slur.

Media Matters wrote that "A significant driver in the fabricated 'groomer' narrative, its Twitter and Instagram accounts have been used repeatedly to misgender people, target teachers who support their LGBTQ students, and flag Pride Month events, at least two of which were later targeted by white supremacist organizations, including the Proud Boys and Patriot Front."

Libs of TikTok has used the term "groomer" to describe elementary school teachers who coerce their students into using preferred pronouns, or who "come out" to their students and encourage students to do the same, or who hold Pride parades to groom kindergarteners into becoming LGBTQ activists. For this, the account is accused of participating in "hate directed towards sexual orientation and gender."

Harvard grad, journalist and self-proclaimed "wise Latina" Alejandro Caraballo complained that: "Shopify is allowing Libs of Tik Tok to use their services in violation of their terms of service against hate directed towards sexual orientation and gender. LoTT is openly using the anti-LGBTQ slur 'GROOMERS" as a discount code on Shopify's platform," Caraballo writes. She shared a Media Matters article that articulated this concern as well.

Eskamani jumped on board, boosting Caraballo's post to Shopify and demanding to know why the online shop hadn't yet responded. Eskamani apparently thinks that online stores should ban sellers that are adamantly opposed to sexualizing children in classrooms. "Shopify do you have a response?" She asked.

Caraballo shared a tweet from the Libs of TikTok account that specified that yes, a discount in the merch shop could be had with promo code "GROOMER," and then Shopify's terms of service restricting users from promoting "hate or violence against people based on... gender, sexual orientation... or other forms of discriminatory intolerance."

While One Fresh Pillow reached out to Eskamani to state that they, too were concerned and "horrified," others pointed out that Libs of TikTok literally reposts content shared by teachers, and others, proclaiming their intentions to bring children into the gender identity cult.

At this point, Eskamani doubled down, insisting that Shopify respond to the concern.

Those "horrified" by Libs of TikTok, which has also exposed drag queens who expose themselves to children at drag queen story hours at public libraries, are not horrified by the people doing the grooming, but by the account pointing it out.

The Babylon Bee's Seth Dillon made this point on Twitter, saying that the only thing that's truly horrific here is the "sexualization of children," which "Libs of TikTok exposes every day."

Last week, author and mathematician James Lindsay was locked out of Twitter for responding to an article about the term groomer being affiliated by LGBTQ activists with LGBTQ activism with the words "ok, groomer." Other gay activists groups have sought to distance themselves from current LGBTQ activist groups, declaring that under no circumstances is lesbian, gay or bisexual advocacy interested in indoctrinating children.

Florida has been adamantly opposed to allowing children to be sexualized in classrooms or indoctrinated into gender identity, and to that end passed the Parental Rights in Education bill. The bill prevents students from being taught sex ed that is not age appropriate, and gives parents the right to not be kept in the dark by teachers and administrators in the event that their children socially gender transition at school but try to keep it secret from parents.

As pushback against the bill came from across the country, Pushaw termed it the "anti-grooming" bill, and the internet lost its collective mind.