"Not one single person present at the game that night has corroborated these allegations. Not even Richardson’s own teammates have claimed to have heard racial slurs. And not only that, there is video evidence whatsoever that supports these claims," Hutchens tweeted. 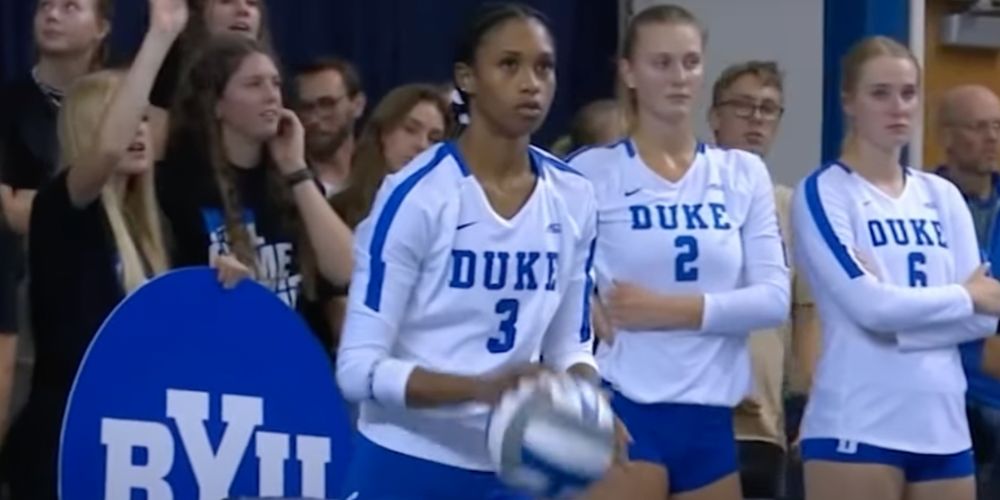 Last week, Duke volleyball player Rachel Richardson, a black woman, claimed she was called a racial slur from the bleachers of an opposing team, BYU, during an August 26 game. As days pass, evidence is mounting that her claim is a fabrication.

On Monday, BYU alum and podcast Backseat Directors host André Hutchens, compiled a timeline of the events, writing, "What I’d like to do is map out these events and put together a timeline of the story, and then compare the allegations of what happened vs what actually happened based on available evidence. My only reason for doing this is to hopefully arrive at the TRUTH"

The controversy started with Richardson's godmother, Lesa Pamplin, posting the allegation on social media. Pamplin, whose Twitter is now private, is a current political candidate running for Judge for Tarrant County Criminal Court in Fort Worth, Texas. Hutchens posted a screen cap of her original allegation which read, "My Goddaughter is the only black starter for Duke's volleyball team. While playing yesterday, she was called a n*gger every time she served. She was threatened by a white male that told her to watch her back going to the team bus. A police officer had to be put by their bench."

A history of Pamplin's posts reveals a long history of racist comments that include, "you poor white motherf*ckers can't take it," "white women & men always disappoint," "Would expect nothing less from a pale white chic. Sit down Becky," and many similar remarks.

On August 28, the player herself, Rachel Richardson, releases a statement claiming she and all the African Americans on her team "were targeted and racially heckled throughout the entirety of the match."

Hutchen's points out that by then many establishment media outlets such as New York Times, NPR, CNN, and ESPN ran the story as "full truth" with no discerning curiosity of the incident as did celebrities like LeBron James.

Governor of Utah Spencer Cox, who has called Tucker Carlson a "white nationalist" and believes men should be allowed to compete in women's sports, tweeted about the situation, calling the perpetrator an "a**hole"

On August 30, BYU's Cougar Chronicle ran a comprehensive investigation that found the slur never occurred. They speak with an extensive list of people seated in the student section where the slur was alleged to be shouted and not a single witness said it happened.

One witness, too scared to identify themselves publicly, explained what actually happened and said "BYU banned an innocent man to appease the mob and make their PR mess go away." The man BYU had banned was a mentally handicapped who was never seated in the student section of shouted racial slurs. Rather he was found "interfering with visiting guests" and as his voice carried, the Duke players said it was he who made the slurs.

"There is zero evidence of a slur being said. Not a single witness, besides Ms. Richardson, has come forth."

Also on August 30, the Salt Lake Tribune released their report concluding the same under the headline, "The fan who was banned by BYU does not appear to have yelled slurs at volleyball match, campus police say."

BYU Campus police back that up as did the BYU athletic department.

Hutchens posted additional evidence on Twitter such as images from the game, including of the section where the slur was reported to emerge. That section was filled with many non-white attendees. Video of the game is also available to watch and review.

"Not one single person present at the game that night has corroborated these allegations. Not even Richardson’s own teammates have claimed to have heard racial slurs. And not only that, there is video evidence whatsoever that supports these claims," Hutchens tweeted.