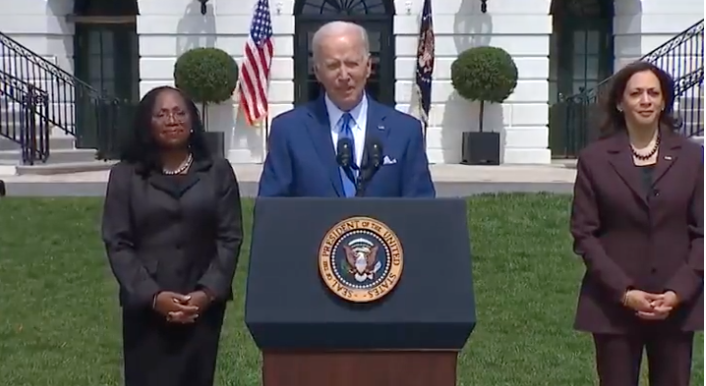 Speaking at the official confirmation ceremony for newly minted Supreme Court Justice Ketanji Brown Jackson on Friday, President Joe Biden said his pick for the nation's highest court had been subjected to "verbal abuse" during her confirmation hearings.

Jackson was questioned extensively on her record during confirmation hearings in the Senate, where she was asked at length about her sentencing practices specifically for cases dealing with child pornography.

"I knew it wouldn't be easy, but I knew the person I nominated will be put through a painful and difficult confirmation process," Biden said.

"But I have to tell you," he went on, "what Judge Jackson was put through was well beyond that. There was verbal abuse, the anger, the constant interruptions, the most vile baseless assertions and accusations. In the face of it all, Judge Jackson showed the incredible character and integrity she possesses."

During the confirmation hearings in the Judiciary Committee, GOP senators grilled Jackson on her lenient sentences for child pornographers and took issue with some of her other cases, as well as her service on the board of an elite prep school in Washington, DC.

Senator Marsha Blackburn asked Jackson if she could provide a definition for the word "woman," but Jackson, saying she was "not a biologist," declined to do so.

President Donald Trump noted in 2020 that his first appointment to the bench, Justice Brett Kavanaugh, was mistreated by the Senate. Kavanaugh was accused of rape based on the testimony of a woman who claimed he raped her at a party when they were both teenagers.

Lawmakers continued to call for investigations into Kavanaugh's activities in high school even well after the allegations had been debunked. Protests against Kavanaugh were attended by celebrities who touted the Me Too movement, some were arrested, and quickly released.