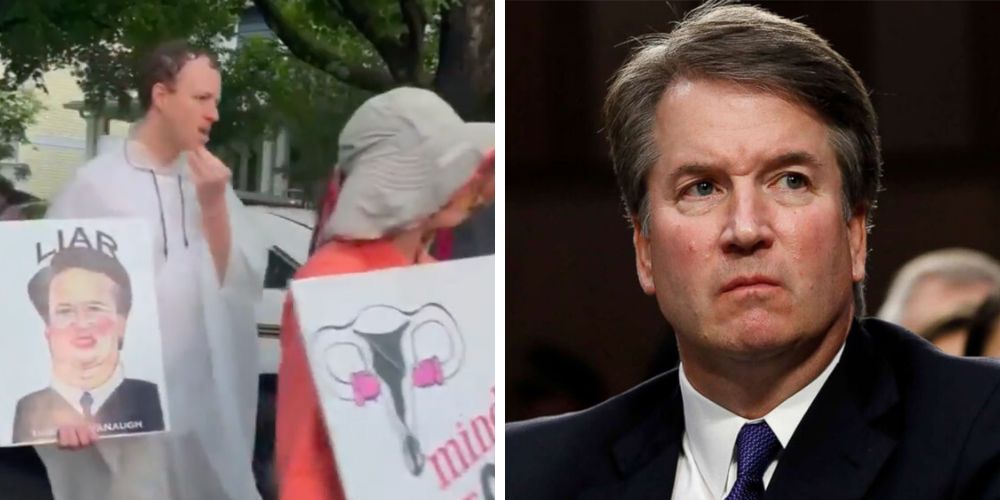 Justice Brett Kavanaugh's neighbor told Fox News in an interview that their neighborhood has been struggling to deal with loud and aggressive protesters since the criminal draft leak of Roe v. Wade.

"They are people who come from out of the area. They have a staging point in a parking lot fairly nearby," the source said.

The organized group of protesters typically meet on Wednesday's and Saturday's around 7 pm, causing a nuisance for families with young children.

"That's when people are putting their kids to bed, there's little kids who live on the street. It's a horrific experience," the neighbor told Fox News. "It's not great if you have kids of any age, but it's unbelievably stressful and the kids are very upset, the kids have to be sent inside and it's so loud you can't put your kids to sleep."

"They picked the exact time, and they don't care," they continued. "Literally, there's no way on a Wednesday night you can put your kid to bed."

There have also been instances of verbal abuse and intimidation towards the neighbors, not just Justice Brett Kavanaugh.

"They have drummers, they have a megaphone, and they chant, they yell all kinds of things… They have told neighbors 'f*ck you, f*ck your children, things like that – and so they're abusive toward the neighbors and intimidating."

"They go in the street. We've been told that because they will move eventually when a car comes down the street, they're not technically blocking the street," they said.

Expressing frustrations with the lack of enforcement, the neighbor said that there are noise ordinances in their community, but protesters don't have to abide by the same set of rules.

"What we've also been told is that this is 'behaving within the bounds of the law' and the only law that could be enforced is the federal law that they're not supposed to protest outside the home of judicial officers, but the federal partners declined to enforce that law," they told Fox News.

The neighbor called out political leadership for failing to intervene as they stressed that the disruptive protests affect each community member due to their homes being situated within close proximity to one another.

"There's nowhere to go to get away from it," they said. "I think people are very concerned that if there isn't action taken, that this will escalate in a way that is very unpredictable and very unsafe and that's what's so discouraging, is the fact that there just doesn't seem to be anyone in a position of leadership or authority who is considering those issues and acting on them and trying to look for a solution rather than just allowing this possibly to escalate."

Last week, a man from out-of-state was arrested outside Supreme Court Justice Brett Kavanaugh's home after abandoning his assassination attempt on the justice.

The suspect, a 20-year-old from California, was reported to have been carrying a gun and a knife, as well as burglary tools, and allegedly said that he "wanted to kill" Kavanaugh.

However, within hours after the suspect was arrested, the protests picked back up and grew even louder, Fox News reports.

"They had a lot of camera crews, obviously, who were here for the news," the neighbor said. "So they came, they had more drums, more noise. They were very, very loud, very, very aggressive. They dance in the streets as well...I mean, it's very unnerving. And there's no consideration given to the neighbors -- we're expected to just take it."

The neighbor said that law enforcement is doing very little to help them despite warning them not to engage with the group for safety reasons.

"It takes away your sense of security," they said. "We have no idea who could embed themselves in this group of protesters."

The neighbor told Fox News that everyone in the community is suffering but Kavanaugh and his family "are suffering more than any of the rest of us."