'They made the whole thing up': Tucker Carlson on the FBI and the Gretchen Whitmer kidnapping plot

Carlson outlined the plot, and how it was organized by undercover FBI agents in order to form a rag-tag group of "right-wing extremists" to commit acts of terror. 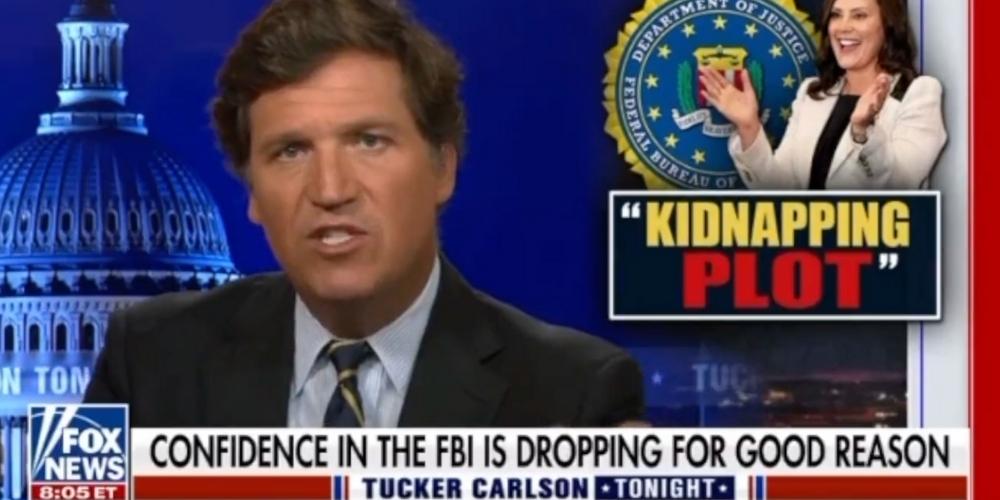 As the retrial for two men accused of plotting to kidnap Michigan Governor Gretchen Whitmer takes place, Tucker Carlson took to his Fox News show Tuesday evening to call out the FBI for allegedly orchestrating the plan by attempting to radicalize the defendants, enticing them with money, drugs, and women.

Carlson outlined the plot, and how it was organized by undercover FBI agents in order to form a rag-tag group of "right-wing extremists" to commit acts of terror.

"In early 2020, a 35-year-old Army veteran called Dan Chappel, nicknamed 'Big Dan,' was working as a contractor for the US Postal Service, he drove delivery trucks," began Carlson, describing one of the defendants.

"He was scrolling Facebook one night, and Chapel says he found a pro-Second Amendment group called 'Wolverine Watchmen,' he says he just happened upon it. Chappel testified that he was concerned by the group's criticism of law enforcement. So, he went to a police officer friend of his and asked for advice. None of the messages within the group violated any law, but somehow within a week Chappel wound up connected to the FBI, to several FBI agents, including a special agent called Jayson Chambers."

Chambers, in addition to being an FBI agent, was reportedly running a side business, a security firm called Exeintel. According to Carlson, this was a violation of the bureau's rules.

"Now, we learned through testimony in the trial this week, why Chambers was interested in the case, Carlson said. "It turns out that Chambers, in violation of FBI policy, was running a side hustle. He just incorporated a security firm called Exeintel. He saw his work on the Whitmer case as a way to promote his own business. We know that, because throughout 2020, someone affiliated with his business, their Twitter account, repeatedly tweeted nonpublic information about the kidnapping case that Dan Chapel was building for the FBI."

According to internet archives, the now-suspended Twitter user "ravagiing," who identified themselves as the CEO of Exeintel in their bio, tweeted "Don’t worry Michigan I told ya A LOT more coming soon," mere hours before the FBI executed coordinated raids throughout Michigan on October 8, 2020, arresting nearly a dozen people it said were involved in a plot to kidnap the state’s governor.

The next day, after news of the alleged plot made international headlines, the account tweeted again: "I told ya ahead of time, Michigan. I also warned of the training camps. It is all on my timeline and prior to this going down. I told warned ya. Most importantly I warned the radical left wing politicians to be very careful of when they lost control of the monster they created."

Indeed, the account had been dropping hints at the plot on Whitmer for months. "Soon….MICHIGAN Soon," the page tweeted on September 24. In December of 2019, nearly a year before the arrests were made, the account posted "Michigan - I got my eyes on you… remember this tweet."

Government documents showed that Chambers owned the company Exeintel, while the trademark was held by Jaime Chanaga, a cybersecurity volunteer for Infragard, a government-funded nonprofit that works directly with the FBI on "counterterrorism, counter intelligence, cybercrime, and other matters relevant to informed reporting of potential crimes and attacks on the nation," according to its tax filings.

According to the Fox News host, the FBI, with Chambers as the handler, paid Chappel "more than $60,000 in the course of just a few months." According to Chapel's newest testimony in the retrial, that was more money than he made working for the USPS in a year.

"So there's a lot of money moving from the FBI, the federal treasury, to this informant, Carlson continued. "So the FBI told Chappel that in exchange for all of that money, he needs to start assembling a group of right wing extremists for the FBI to prosecute. They made the whole thing up. And he did that with the FBI's help."

"Within a few weeks, the FBI created a new Facebook group called 'Patriot Three Percenters'" claimed Carlson. "So Chappel and several members of that group then attended a protest at the Michigan State Capitol. 'Look at you bringing people together,' the FBI handler texted Chappel."

"Now throughout that protest, which didn't look a whole lot different from the January 6 protest, Chappel kept in touch, close touch, with federal agents. He informed the feds that a 37-year-old man called Adam Fox was at the state capitol during the protests."

According to Carlson, Fox "has got to be one of the least powerful people in our society," as he lived alone with his two dogs in the basement of a vacuum repair shop. He was reportedly so poor that "in order to get running water to brush his teeth or use the bathroom, he had to go to a nearby Mexican restaurant and use their restroom."

"So Chappel began texting this diabolical mastermind, Fox, hundreds of times but Fox seemed inherently moderate," Carlson said. It came," and "in our hearts and minds, we are not domestic terrorists."

Carlson continued on to make the claim that the FBI provided Chappell with several credit cards with $5,000 limits, and instructed him to give them to Fox so he could spend it on "guns and ammunition."

"So Fox, despite the fact he had no money at all, and had to use the mens room of a Mexican restaurant to brush his teeth, refused," Carlson said in the monologue. "On five separate occasions, he refused to take the credit cards to buy guns and ammunition. What a terrorist."

"Then, in July of 2020, Chappell suggested that Fox and others fire rounds into the governor's mansion as well as at her cottage, but the alleged plotters, including Adam Fox, again refused. They didn't want to hurt the governor."

When the bureau-grown extremist group started to splinter in August of 2020, Chappel, along with informants, were instructed to keep the group together, according to Carlson's interpretation of the trial findings.

"So, they introduced another undercover agent pretending to be an explosives expert. He showed the group a video of a bomb that blew up a vehicle to prove he knew what he was doing. Where did that video come from? Oh, it was made by the FBI. Is this shaking your confidence a little bit?" Carlson asked his audience. "Then the bureau recruited a convicted felon and a longtime FBI informant called Steven Robeson to introduce a new idea to Fox as well as to Barry Croft. This time the idea was to kidnap Gretchen Whitmer."

According to the conservative commentator, Robeson, with the FBI's money, organized several events including a national militia conference in Ohio, a training session in Wisconsin, and a meeting in Delaware. In these meetings, the idea of kidnapping the democratic Michigan politician was criticized as "crazy."

"So with this militia meeting, an alleged plotter called Ty Garbin, rejected out of hand the idea of kidnapping Gretchen Whitmer. Didn't want to do it. 'No, I don't think so. Kidnap the governor? No, we're not crazy. We just want a constitutional republic,'" said Carlson, describing the aversion the group members had to carrying out the plot.

"Then, the topic came up again in August and another defendant called Daniel Harris was equally adamant," said Carlson. "'No Snatch and grab.' He said, 'I swear to effing God.' So clearly, they said emphatically out loud explicitly. These are people who are not interested in kidnapping Gretchen Whitmer, the governor of Michigan. But the FBI kept pushing. The FBI informants drove the defendants to Gretchen Whitmer's home. Then they suggested killing the governor of Virginia, also a Democrat."

"On September 5, 2020, FBI Special Agent Jayson Chambers texted Chappel 'mission is to kill the governor specifically.' What country is this?" Carlson asked the audience incredulously. He then went on to describe how FBI informant Jenny Plunk attempted to entrap Croft. "To pressure one of the defendants, a man called Barry Croft, into doing that, one FBI agent admitted this week that a female informant slept in the same hotel room as Croft. It was a honey trap."

Carlson also claimed that the FBI agents involved in the case also regularly got high with Fox. According to testimony, informants smoked weed with Fox while they were plotting, reported Detroit Free Press.

"Again, that's against FBI policy. You can't just give drugs to people and hope they do something bad," said Carlson. "Well, after all of this failed to produce a kidnapping plot, it fell on yet another FBI agent called Richard Trask to build the criminal case against the defendants. Now that same year, Trask, who has now been convicted of beating his wife, called Donald Trump a 'piece of excrement' on social media."