Yet another parent has come forward with a fiery condemnation of the teaching of critical race theory in schools. 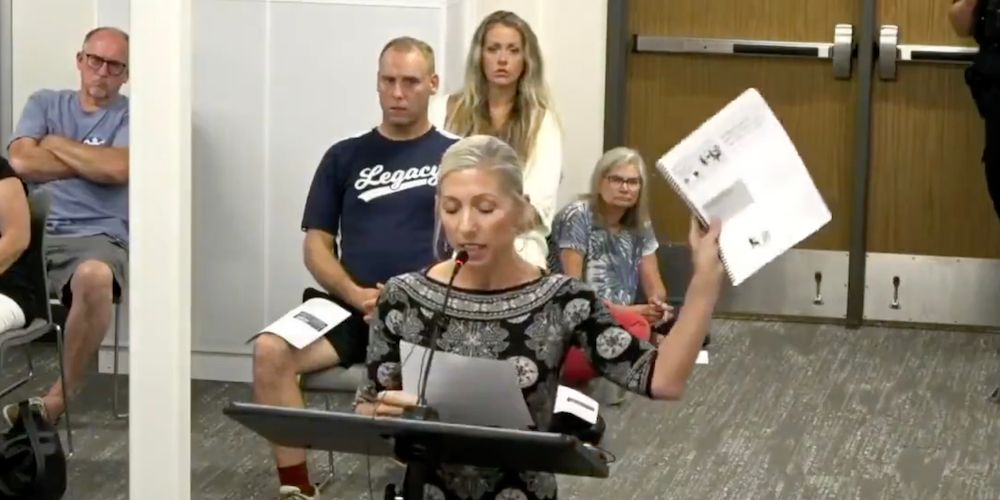 Yet another parent has come forward with a fiery condemnation of the teaching of critical race theory in schools.

"I love that we start each meeting with the pledge of allegiance," the concerned Blue Valley, Kansas parent began, "where we all agree that we are one nation, one people, indivisible."

She then held up material from a Diversity, Equity, and Inclusion (DE&I) teacher training guide that suggested "America is a racist country built on racist ideas," and that "privileged white people oppress people of color, and heterosexual people suppress gay people."

"This hateful, divisive material," the parent continued, "teaches teachers to hate America and ultimately break every person down into privileged and the oppressed. This is the exact definition of critical race theory."

She then suggested that "CRT is not a noun ... it's a verb, CRT is the action of a Marxist movement that teaches people to hate America, and it segregates people into privileged and oppressed."

The parent criticized the school board for manipulating words to hide the true origins of the ideas being pushed. "Blue Valley chooses to call this training DE&I," she continued, "so you can tell the public and the state board of education that you don't teach CRT. You can call this whatever you want; the material is CRT."

She then quoted one of the board members as saying, "Blue Valley is gonna insert DE&I into everything we do, and we will rewrite curriculum to insert DE&I," asking what oversight will be exist to ensure the board doesn't implement critical race theory under the guise of DE&I.

In recent years, critical race theory has slowly seeped out of the law school classrooms from whence it originated, and into the mainstream public discourse. Originally developed in the 1970's as a framework through which scholars could analyze racial disparities, the tenets of critical race theory are now being repackaged simply as DE&I training or "race conscious education" and taught in many of America's public schools.

The issue of how to properly teach students about the nation's racial history has long been divisive, with some arguing that it has been "whitewashed," and others suggesting that going too in depth into the past will create unnecessary division in the present. The recent injection of critical race theory's ideas into the curriculum has only served to further complicate the issue.

Proponents of teaching critical race theory argue that racism and other forms of discrimination are built into the very fabric of America's institutions and society, thus the only way to reverse them is to analyze and deconstruct the entire system from the ground up.

Those against the idea say teaching children that they are inherently good or bad based on immutable characteristics will do great harm, and create an even more divided society. This is not to say the injustices of the past must be left out of history textbooks, rather, the focus should be on uniting everyone, regardless of background, as Americans, something critical race theory does not allow.

Legislators, scholars, and parents have pushed back against the teaching of critical race theory in schools. In response, many on the left have claimed that anyone who takes issue with it are themselves, racist.