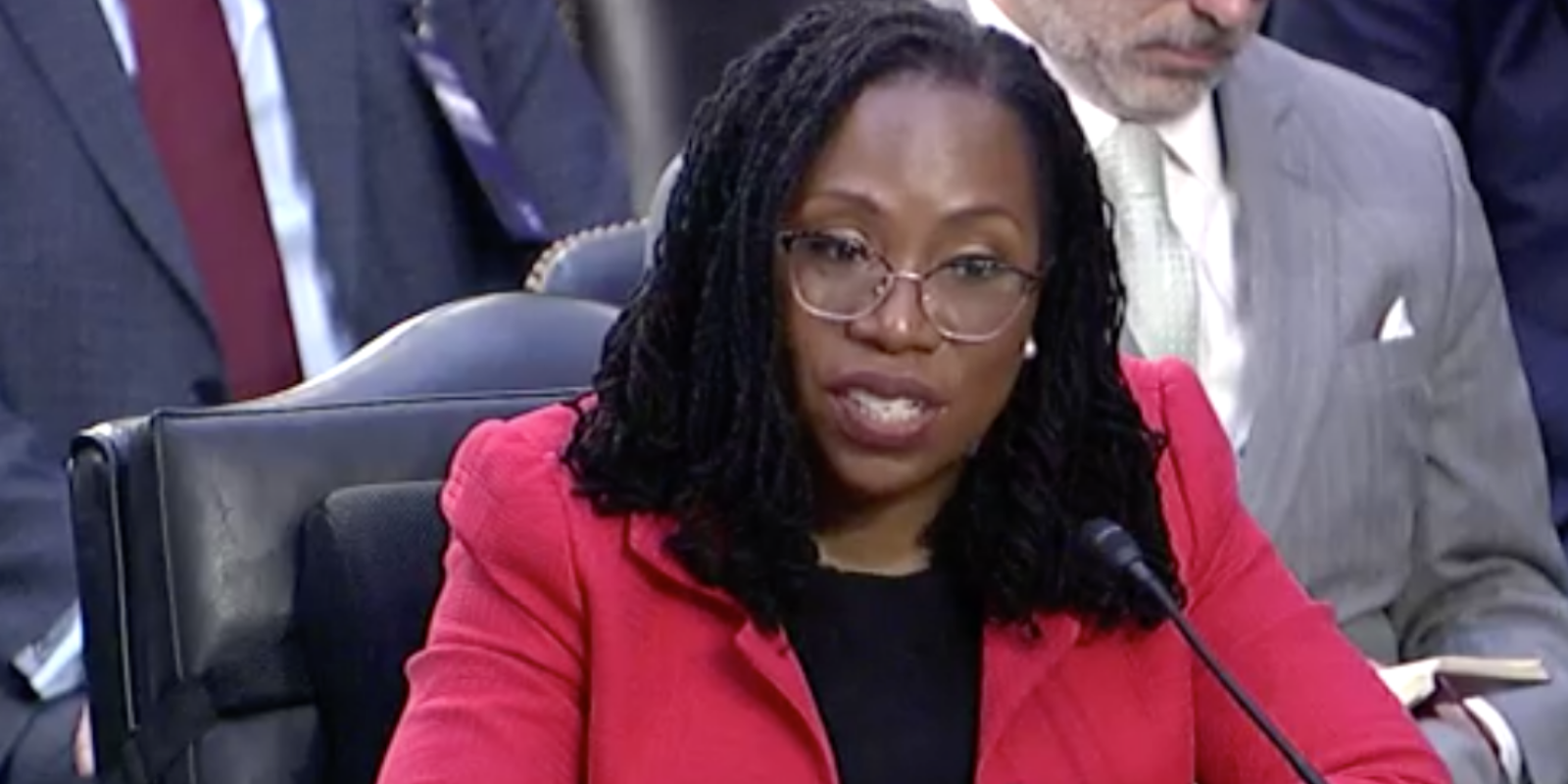 Biologists have been cancelled professionally for defining what women are in biological terms. Biden's Supreme Court nominee Judge Ketanji Brown Jackson, however, deferred to biology when asked on during Senate confirmation hearings to "provide a definition" for the word woman.

When asked by Senator Marsha Blackburn to "provide a definition" for the words, Jackson said that she could not do so "in this context," adding "I'm not a biologist." In so stating, Jackson cited biology as a determining factor in assessing the definition of what a woman and man are.

But in deferring to biologists and the scientific discipline of, Judge Ketanji Brown Jackson, Biden’s Supreme Court pick, has proven that big tech and corporate media are corrupt censors. Media and big tech companies routinely call men women simply because those men say they are women, without providing a definition of what a woman is, or saying how they fit into the existing definitions.

Mainstream media outlets refer to men who say they are women as women, using female pronouns for those biological males, and media outlets and pundits who refuse to capitulate the definitions of reality in service to a fragile emotional condition requiring lies over truth. Tucker Carlson, The Babylon Bee, Charlie Kirk, Reps. Marjorie Taylor Greene and Jim Banks, Meghan Murphy, Kellie-Jay Keen, have all been banned from social media for saying that men are not women.

Moreover, biologists who have stated facts outright have run into trouble professionally, as well as on social media, for expressing the God's honest truth, that women and men are biological realities and that this biology is an immutable condition.

Evolutionary biologist Colin Wright was essentially run out of the field for saying "Male and female are not social constructs, but are real biological categories that do not fall on a spectrum." Wright has a PhD in evolutionary biology, and could likely help Jackson by providing a definition for the word woman.

So, too, could Carole Hooven, a biology professor at Harvard who was called "transphobic" for refusing to refer to pregnant women as "pregnant people." She stated that in culture today, "...the ideology seems to be that biology really isn't as important as how somebody feels about themselves, or feels their sex to be." She gave an interview to Fox & Friends about her views.

Hooven was taken to task by the Director of the Diversity and Inclusion Task for, saying "I am appalled and frustrated by the transphobic and harmful remarks made by a member of my dept in this interview with Fox and Friends."

"Let’s be clear: if you respect diverse gender identities & aim to use correct pronouns, then you would know that people with diverse genders/sexes can be pregnant incl Trans men, intersex people & gender nonconforming people. That isn't too hard for medical students to understand," the DEI specialist Laura Simone Lewis informed, claiming that not using the term woman to describe women "demonstrates respect for EVERYONE." It's likely that Hooven could help Jackson in providing a definition of the word woman.

Dr. Debra Soh, a Canadian scientist who has written a book on The End of Gender, left the field of scientific research when it turned out that expressing the view that men and women are real biological entities was not particularly tolerated by her peers. Soh argued that there are only two sexes. Jackson could perhaps defer to Soh to gain an understanding of what the definition of the word woman is.

In citing biology, in saying that male and female are terms of biological science, this Supreme Court nominee unwittingly overturned the Biden administration's entire gender identity program, which has conflated biological sex with gender identity.

Biden's executive order, signed into office during his first days as president, essentially merges biological sex and gender identity, making it so that existing laws outlining protections or rights for women are now extended to those biological males who have determined that they are women.

When Jackson was asked what a woman is, it was in the context of a culture that has abandoned the biological facts of sex and replaced them with a shifting, unclear, often feelings-based understanding of what women are. The reason Jackson declined to answer the question, calling instead for help from biologists, was so that she would not be lumped in with those horrific "transphobes" who know that males and females are biological entities defined by their reproductive capabilities.

The only reason she could reasonably had to say that she could "not provide" a definition for the word woman, despite being one herself and knowing full well what makes a woman, is fear. Jackson is beholden to trans activists, and indeed the sitting president, who require the complete and total obfuscation of reality in favor of feelings.

Instead, on day three of questioning under Senator Ted Cruz, Jackson said "I know that I'm a woman, I know that Senator Blackburn is a woman, and the woman who I admire most in the world is in the room today, my mother."

Perhaps even in this final determination from Jackson she has deferred to a biological definition, referring to her mother as a woman. A mother is a woman who gives birth to a child, a mother is a biological reality, is an adult human female who is a parent.

Jackson knows what a woman is, she knows that she, a mother, her own mother, and Senator Blackburn are all women. What she is unable to do is to say it outright, despite having the full breadth of knowledge as to what women are. There is fear here, and Jackson would do well to be unafraid of expressing the biological truth of womanhood if she is to serve as a justice on the nation's highest court.