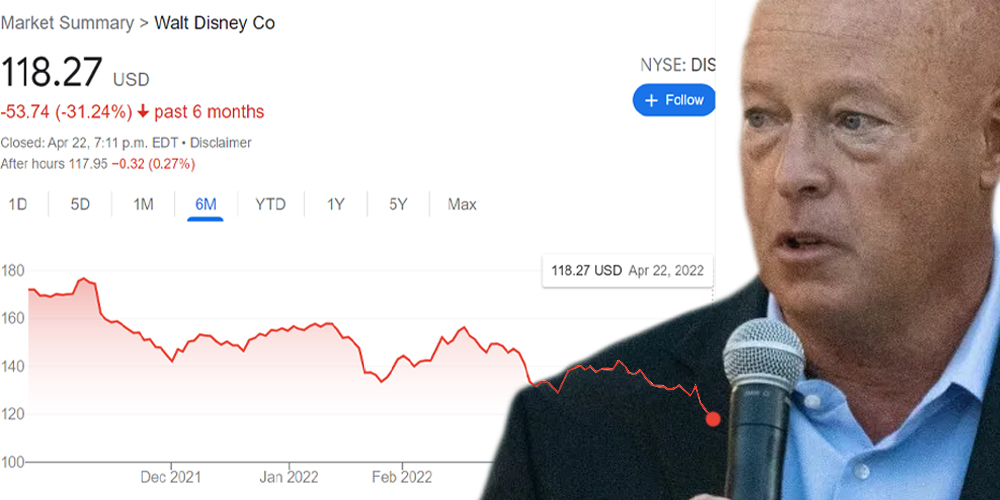 According to the Washington Examiner, the downfall of Disney has been $46.6 billion USD since March 1, which the outlet marks as shortly before the start of their ongoing conflict against the state of Florida.

The latest battle has Disney losing their special self-governing status. Tens of billions of dollars were wiped out of Disney's stock value since Tuesday, alone. Coincidentally, that was the same day DeSantis announced that eliminating Disney's "legacy special district" status was on the session agenda.

Now on Friday, DeSantis signed a bill that made it official. By June 1, 2023, Disney is no longer allowed to do their own zoning, laws, policing, or infrastructure.

"You're a corporation based in Burbank, California, and you're gonna marshal your economic might to attack the parents of my state. We view that as a provocation, and we're going to fight back against that," he commented.

The once-defiant Disney CEO Bob Chapek previously told employees he wouldn't allow the company to engage in "political football" public relations. But he ended up apologizing for not being "a stronger ally" for the vocal far-left staff.

Disney's CEO found himself condemning Florida's Parental Rights in Education law when DeSantis signed it. The company's promise to work against the state to get the anti-grooming law repealed led to a larger feud between the state government and Walt Disney Company.

The fallout since then has included reports of Disney being lax on dealing with child predators working for the company. The company recently added "problematic" labels to the 1953 Peter Pan film. But a boycott campaign has since come about in response to Disney's submission to far-left political ideology at a corporate level.

What investigative reporter Christopher Rufo discovered was that Disney executives are not just actively inserting more "diversity" into their products, on a workplace level, they've introduced programs that allow for employees to facilitate the gender transitioning of their children.

A Trafalgar Group poll from earlier this month found that 68 percent of Americans are less likely to do business with Disney in the future, given the company's sexualization agenda. Many parents have since flooded Disney's phone lines to complain about "their support for sexualizing kids in kindergarten."

People were aware of the company's change in politics after it was revealed last year that employees had to undergo critical race theory seminar training.