"Since learning of these specific activities," they wrote, "we have made the decision to withdraw our participation in this year's Boise Pride event." 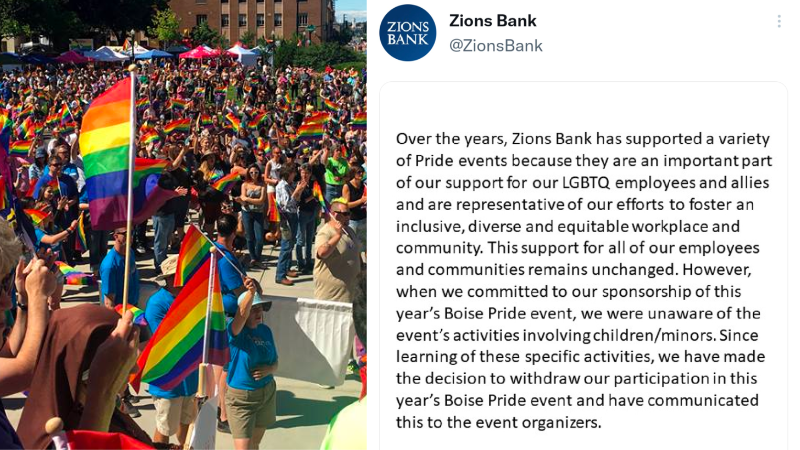 A major sponsor of Boise, Idaho's upcoming Pride festival has pulled out just a few days ahead of the weekend festivities, saying that they cannot support the sexualization of kids. Zions Bank has pulled its support for the Pride festival after realizing that children would be featured as drag performers at the event.

Zions Bank wrote that despite their support of the Pride festival in the past, and their interest in supporting their LGBTQ employees, they were unaware, when they committed to sponsor the Pride event, that the event was featuring children and minors. "Since learning of these specific activities," they wrote, "we have made the decision to withdraw our participation in this year's Boise Pride event."

The Boise Pride festival offers multiple programming opportunities for children, and that feature children. These include afternoon drag shows, as well we a Drag Story Time, and an event called Drag Kids.

There are many other corporate sponsors of Boise Pride. Local grocery chain Albertson's is the primary sponsor of the event, according to the Idaho Freedom Foundation.

"The City of Boise," Idaho Freedom Foundation writes, "is just one of several public entities that are donating taxpayer dollars to fund this event. Other government sponsors include the University of Idaho College of Law, the College of Western Idaho, and Central District Health." Taxpayer funding of Pride from the Idaho Department of Health and Welfare was more than $100,000 on pride events in 2021.

Children have been brought into drag as part of Pride and LGBTQ+ events over the past years. A Pride event in Ottawa, Ont. featured a drag performer inviting children to twerk on stage.

In Palm Springs, a drag queen invited a child to dance erotically for tips, congratulating the child on "how much money" they made for doing so.

Libraries target children for Drag Queen story hours, where children are treated to drag queens reading aloud stories about gender identity and sexual orientation that are geared toward young children.

A drag brunch in Texas featured parents encouraging their children to tip drag queens in cash for their performances at a bar. Financial company Vanguard hosted a family drag event for children of employees.

Another drag performance attended by kids featured topless dancers. A Texas drag event had armed guards to prevent protestors from interfering in the child-attended show.

Drag Story hour has been advocated for by academics who call it the "queering" of early childhood education. The authors of a paper encouraging drag time in schools and libraries for kids authors "discuss five interrelated elements of DQSH that offer early childhood educators a way into a sense of queer imagination: play as praxis, aesthetic transformation, strategic defiance, destigmatization of shame, and embodied kinship."

"The authors propose that 'drag pedagogy' provides a performative approach to queer pedagogy that is not simply about LGBT lives, but living queerly."