The Biden administration has called for media and social media censorship, using COVID-19 as an excuse to tell social media platforms to take a tougher stance on "misinformation" and "disinformation." 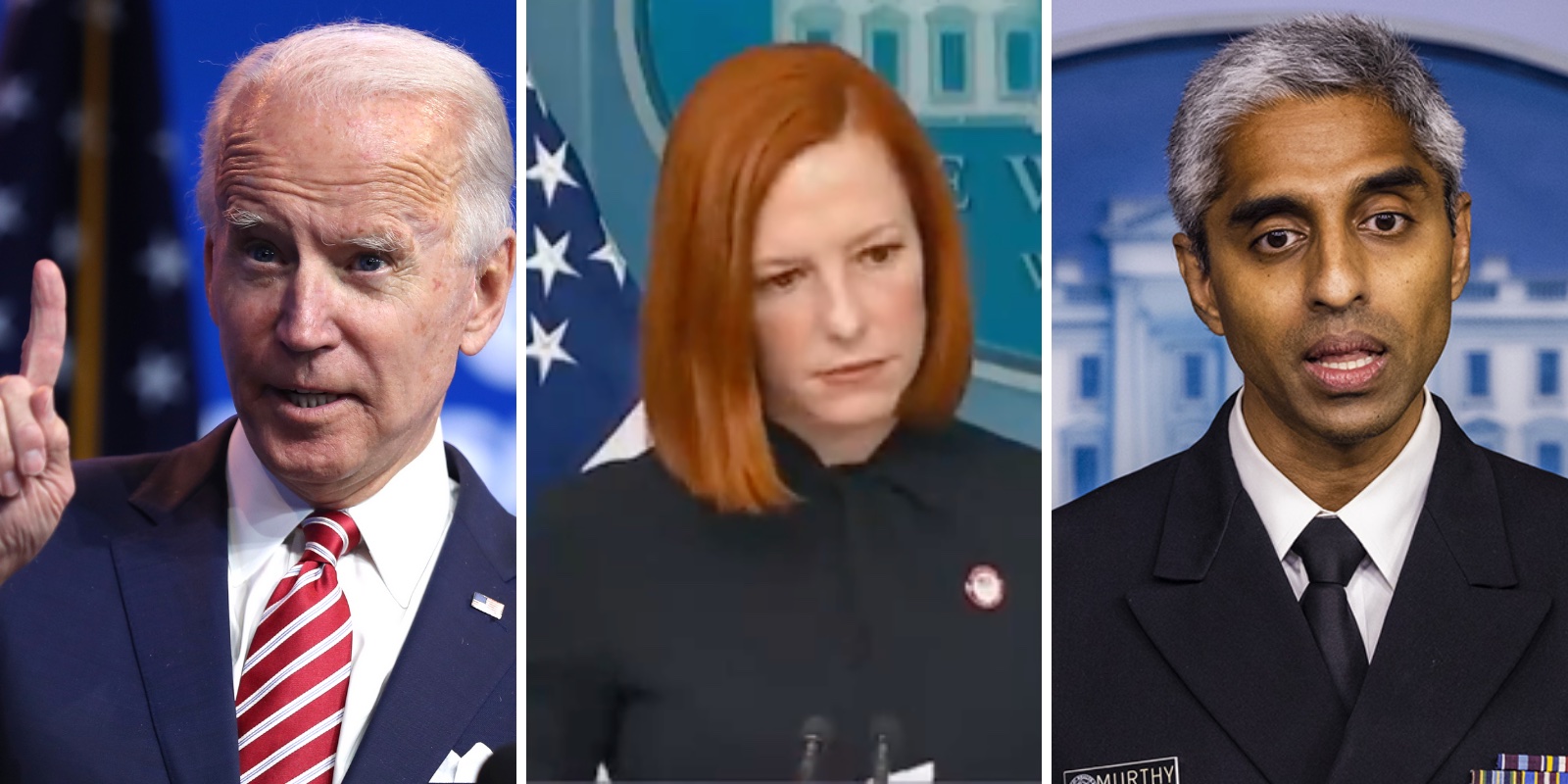 The Biden administration has called for media and social media censorship, using COVID-19 as an excuse to tell social media platforms to take a tougher stance on "misinformation" and "disinformation," which the White House identifies as anything that goes against its messaging.

While there has been pushback against the administration, they have also been effective. Social media companies have ramped up efforts, partnering with fact checkers to label as false, misleading, or missing context many stories that have countered claims from the Biden administration, such as those on vaccine efficacy, and others, which were later proved to be accurate despite the White House's wish otherwise.

In May, White House Press Secretary Jen Psaki called for Big Tech platforms to censor Americans more, this after former President Donald Trump was booted off Facebook, calling it a "health and safety issue."

Speaking for the president, she said that social media "platforms have a responsibility, related to the health and safety of all Americans, to stop amplifying untrustworthy content, disinformation and misinformation, especially related to COVID-19, vaccinations, and elections. And we've seen that over the past several months, broadly speaking… we've seen it from a number of sources."

"His view," Psaki said, referring to Biden, "is that that's more than needs to be done to ensure that this type of misinformation, disinformation, damaging, sometimes life threatening information is not going out to the American public."

When asked about "concern for First Amendment rights," Psaki said, "well, look, I think we of course are a believer in First Amendment rights. I think what the decisions are that the social media platforms need to make is how they address the misinformation, disinformation, especially related to life threatening issues like COVID-19 and vaccinations that continue to proliferate on their platforms."

Texas Senator Ted Cruz asked at the time "if the Big Tech oligarchs can muzzle the former President, what's to stop them from silencing you?"

In July, the President, the Surgeon General, and the Press Secretary all made statements that social media and media companies should censor and suppress content that went against the administration's messaging.

"Misinformation tends to flourish in environments of significant societal division, animosity, and distrust," Murthy wrote. "Distrust of the health care system due to experiences with racism and other inequities may make it easier for misinformation to spread in some communities. Growing polarization, including in the political sphere, may also contribute to the spread of misinformation."

"You all make decisions just like the social media platforms make decisions, even though they are a private sector company and different but just as an example," Psaki continued from the White House podium.

Psaki said that the Biden administration is "regularly making sure social media platforms are aware of the latest narratives dangerous to public health that we and many other Americans are seeing across all of social and traditional media."

Biden gave a speech to update Americans on the ongoing COVID-19 crisis, in which he begged Americans to wear masks, pressed vaccines and boosters on the vaccinated, and asked social media and media companies not to run stories or allow posts that run counter to government narratives on COVID-19.

"I make a special appeal to social media companies and media outlets," he said, "Please deal with the misinformation and disinformation that's on your shows; it has to stop." He shook his head in dismay. He said further that COVID-19 is one of the most formidable enemies America has ever faced, and "we've got to work together."

Surgeon General Vivek Murthy took a stand in January as well. After the controversy erupted over Joe Rogan's podcast interview with Dr. Robert Malone, a doctor who has a far different view on COVID-19, and vaccination, than Murthy, Murthy expressed his ideas on how to "root out misinformation."

"Number one, we've got to recognize that our technology platforms, whether particularly social media, these have an important role to play. These are the predominant places where we're seeing misinformation spread," he went on.

"These platforms have still not stepped up to do the right thing and do enough, I should say, to reduce the spread of misinformation," Murthy said."But each of us also has a role to play here," he went on, "because we all have platforms and particularly if you're somebody who has a large following, whether you're an entertainer, a politician, in the media, it's your responsibility, all of our responsibilities, to make sure that we are thoughtful in what we are sharing.

"This is not just about entertainment, it's not just about garnering clicks. This is about people's lives. And we have seen time and time again that misinformation costs people their lives.

"So you know we all have— this is not just about what government can do— this is about companies and individuals recognizing that the only way we get past misinformation is if we are careful about what we say and we use the power that we have to limit the spread of that misinformation. That's going to be a critical part of how we get through this pandemic," Murthy concluded.

Psaki had her own response to the Rogan-Malone controversy. YouTube removed the interview Rogan had with Malone, and nearly 1,000 people, some of whom are doctors and scientists, insisted that Spotify implement stricter content controls so that people like Rogan cannot have interviews that question the administration's narrative on COVID-19.

Psaki was among those calling for further suppression of Rogan. Spotify, the platform that hosts the podcast, was slammed by other artists who ended up pulling their music off the platform in protest. In response to the backlash against Rogan, Spotify said they would slap labels on podcasts that dealt with alternative views on COVID-19.

For Psaki, this was not enough. First, she backed Murthy, saying: "Well, last July, you probably know, but the Surgeon General also took the unprecedented step to issue an advisory on the risk of misinformation and public health, which was a very significant step, and amid that he talked about the role social media platforms have."

"So our hope is," Psaki said, "that all major tech platforms, and all major news sources for that matter, be responsible and be vigilant to ensure the American people have access to accurate information on something as significant as COVID-19, and that certainly includes Spotify," she said.

Psaki said that while the advisories that Spotify will display is "a positive step," the White House wants platforms to do more to suppress and remove misinformation and disinformation, while "also uplifting accurate information."

"That's pretty significant. And we think that is something that unquestionably should be the basis of how people are communicating about it. But ultimately, you know, our view is it's a good step. It's a positive step, but there's more that can be done," she concluded.

In October 2020, Biden gave a preview as to how he could control social media companies and the press. As the presidential election was nearing its conclusion, Twitter famously censored articles from the New York Post alleging that Biden and his son Hunter Biden had profited from international influence peddling schemes. Twitter pulled the stories after "rumors" from US intelligence agencies warned that there could be a "hack-and-leak operation" involving Biden in the days leading up to the election.

Yoel Roth, head of Twitter's Site Integrity Team, said the platform's decision to censor the Post was justified because of information they allegedly received from US intelligence officials. Roth is the mastermind behind Twitter's policy of labeling "misleading posts." Roth also called Trump and his administration "ACTUAL NAZIS."

Roth met throughout 2020, he reported, with officials in government to discuss election security. It was in one of these meetings that he learned that "there were rumors that a hack-and-leak operation would involve Hunter Biden." When the New York Post story came out, it was assumed to be a hack. Twitter and Facebook essentially banned the story from their platforms.

Biden called the story "unsubstantiated," saying that the contents of the laptop were a result of "Russian disinformation," and that contents were "Hacked materials." They weren't, but these smears of the Post as well as public questioning of the information had the desired effect. NPR, Washington Post, New York Times, and other outlets not only didn't run the story, but ran articles saying why they wouldn't run the story—claiming it was hacked, Russian disinformation, or unsubstantiated.

Twitter CEO Jack Dorsey would later apologize for this incorrect assumption, that could likely have skewed election results in Biden's favor.