"Climate deniers are really in some ways similar to all of those almost 400 law enforcement officers in Uvalde, Texas," Gore said on Sunday's "Meet the Press." 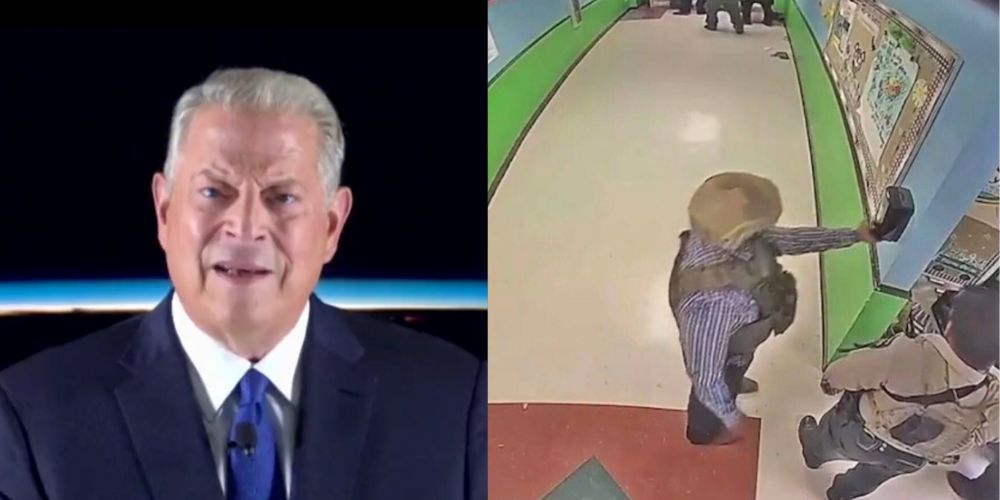 Former Vice President Al Gore said on Sunday that climate change deniers were the same as the Uvalde, Texas law enforcement men and women who did nothing as school children were being slaughtered under their watch.

"Climate deniers are really in some ways similar to all of those almost 400 law enforcement officers in Uvalde, Texas, who were waiting outside an unlocked door while the children were being massacred," said Gore. The remarks were released as part of a pre-recorded segment of NBC's "Meet the Press."

The failed presidential candidate continued, "And confronted with this global emergency, what we're doing with our inaction and failing to walk through the door and stop the killing is not typical of what we are capable of as human beings."

On May 24, gunman Salvador Ramos entered Robb Elementary School at 11:33am and massacred 21 children and two teachers. Police were on the scene in minutes but did not charge the unlocked classroom door behind which Ramos hid. Before Ramos was eventually killed at 12:50, almost an hour and a half later, over 400 law enforcement arrived on the scene, held back, and detained parents while their children were dying and begging to be saved. Uvalde School District Police Chief Pete Arredondo yelled "Tell them to f*cking wait."

On comparing Uvalde to climate change, Gore remarked that Uvalde officials, "heard the screams, they heard the gunshots, and nobody stepped forward," even though they had the solutions. Gore said Americans, concerning climate change, "do have the solutions, and I think these extreme events that are getting steadily worse and more severe are really beginning to change minds."

Gore's said, "We have the filibuster, still, which ought to be eliminated," and that after the filibuster was gone Democrats can then "reinstate the ban on assault weapons" and pass the climate legislation he was proselytizing.

After saying that people who didn't respond to climate the way Gore recommended were the same as Uvalde cops, the former VP said "We have to have unity as a nation to come together and stop making this a political football."

According to the New York Post, Gore says the reason more movement isn't being made on climate change is because "'broken democracy is stifling the efforts."

Gore has been criticized for taking "literary license" with the facts around climate change in the past. The most famous example being his 2006 film An Inconvenient Truth which "did exaggerate some dire scenarios" in order to "shock the public into action" according to National Snow and Ice Data Center scientist Ted Scambos.