"Again, I believe I showed the utmost courage on Jan. 6, and it's time for me to do that now," Capitol Police officer Lt. Michael Byrd said. 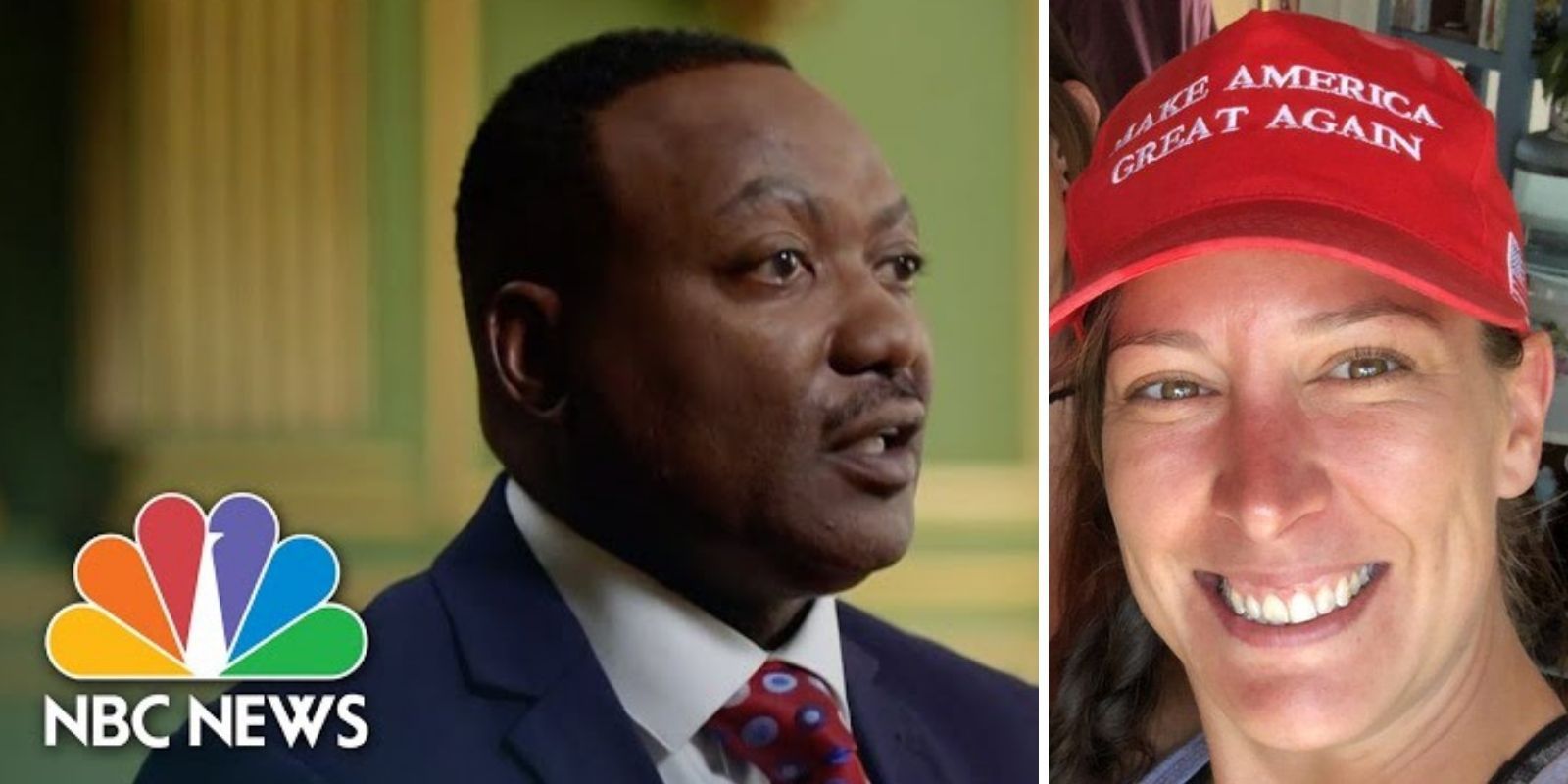 The previously-unnamed Capitol Police officer responsible for killing Ashli Babbitt has come forward to claim that he "saved countless lives" on Jan. 6 and opened fire only as a "last resort" after the rioters failed to comply with his commands.

Breaking his months of silence since the Capitol Hill riot, Lt. Michael Byrd, in an exclusive interview with NBC News Thursday evening, described the fatal scene near the glass doors leading into the lobby of the House chamber.

Byrd and several other Capitol Police officers had created a makeshift barricade of furniture outside the doors during the storming of the Capitol building in January.

"Once we barricaded the doors, we were essentially trapped where we were," Byrd told NBC News anchor Lester Holt, speaking publicly for the first time since the federal breach. "There was no way to retreat. No other way to get out," he added.

Byrd, a 28-year veteran of the Capitol Police and the section commander for the House chamber, told the left-wing news outlet that he took a tactical defensive stance with his gun drawn as rioters smashed the glass doors.

As the horde of rioters arrived, Byrd said he yelled repeatedly for the conservative crowd to get back. But the mob continued to advance until a lone rioter tried to climb through one of the Capitol doors. Byrd fired one shot, striking Babbitt in the shoulder. Babbitt, an ardent supporter of former President Donald Trump, fell to the ground and later died from her gunshot injuries.

Byrd, who is black, claimed he has been in hiding for months after he received a flood of death threats and alleged racist attacks that started when his name was leaked. "They talked about killing me, cutting off my head," Byrd said. "It's all disheartening, because I know I was doing my job."

An incident from Byrd's past has also gained renewed attention online. Byrd left his service weapon in a bathroom where another officer discovered it in 2019. Byrd described the old incident as a "terrible mistake," which he said he "owned up to," was penalized for, and "moved on" from.

"Sometimes, you can’t do anything but cry," Byrd said of the controversy over the disputed Capitol Hill riot shooting and ensuing vitriol. "You felt like you did your job. You helped protect our legislative leaders of this country and you fought for democracy and keeping them established."

However, he said that he has no doubt that he made the right decision on Jan. 6.

"I know that day I saved countless lives," Byrd declared, noting that he has no idea whether the individual he shot dead was carrying a weapon. "I know members of Congress, as well as my fellow officers and staff, were in jeopardy and in serious danger. And that's my job." Byrd said it was later that night that he found out that the rioter was a 35-year-old woman who was unarmed.

Holt asked, based on Byrd's training, "does it matter that [Babbitt] was armed or not?" Byrd responded: "According to law, it does not. I know, based on my training and my policy what I did was appropriate."

Because of the wall of stacked furniture, Byrd said he couldn't make out how many people were on the other side of the door or whether weapons were being carried.

"It was impossible for me to see what was on the other side," Byrd insisted. He said he did see the person now known as Babbitt to start entering through the broken glass. "I could not fully see her hands or what was in the backpack or what the intentions are," Byrd stated, noting that the pro-Trump rioters had "shown violence leading up to that point." It was the first time Byrd had ever shot his weapon in his almost three decades on the force, according to NBC News.

Questioned why he pulled the trigger, Byrd said the lethal act was his final means.

"I tried to wait as long as I could," Byrd maintained in the bombshell interview with Holt. "I hoped and prayed no one tried to enter through those doors. But their failure to comply required me to take the appropriate action to save the lives of members of Congress and myself and my fellow officers."

Byrd gave NBC News permission to use his name after authorities had declined to release the officer's identity to the public. The controversial cop had since been cleared of wrongdoing and any liability by the Department of Justice back in April and the Capitol Police in an internal probe last Friday.

"The investigation revealed no evidence to establish that, at the time the officer fired a single shot at Ms. Babbitt, the officer did not reasonably believe that it was necessary to do so in self-defense or in defense of the Members of Congress and others evacuating the House Chamber," federal prosecutors said in a statement.

An internal memo from the commander of the Capitol Police's Office of Personal Responsibility stated that "no further action will be taken in this matter." The exoneration concluded the last remaining investigation into the fatal shooting.

The official remarks on the Capitol Police's internal findings labeled Byrd's conduct "lawful and within Department policy, which says an officer may use deadly force only when the officer reasonably believes that action is in the defense of human life, including the officer's own life, or in the defense of any person in immediate danger of serious physical injury."

"Again, I believe I showed the utmost courage on Jan. 6, and it's time for me to do that now," Byrd reiterated during the interview. "I hope they understand I did my job," Byrd said of his widespread critics. "There was imminent threat and danger to the members of Congress. I just want the truth to be told."

The family of the slain Air Force veteran was suing for the identity of the now-named officer, a legal move separate from the more than $10 million lawsuit against the Capitol Police, which will alleges that the USCP violated Babbitt's constitutional right against the use of excessive force.

"Ashli Babbit [sic] should not have done what she did, but this is complete BS. Media would not be covering for this cop if this was a police-involved street shooting anywhere else in America," the Washington Free Beacon's investigative reporter Chuck Ross commented on Byrd's empathetic interview with NBC News.

"Look at what this dummy said, the one who shot ASHLI  BABBITT: 'I saved countless lives' ---WHAT THE HELL?  He's the only one who KILLED anyone!" Newsmax TV host Greg Kelly fired back at Byrd's claim.

Rep. Adam Kinzinger (R-IL), an outspoken Trump critic who was one of 10 House Republicans to vote for the former president's second impeachment, agreed that Byrd "saved lives" on Jan 6. "Those who demonize him are either ignorant, or politically driven to find a martyr. Byrd is a hero," Kinzinger declared on Twitter.

The fatal shooting of the Air Force veteran was captured on viral video filmed by self-styled Black Lives Matter activist and far-left rioter John Sullivan who received $35,000 each from CNN and NBC in payments for the publicized Jan. 6 footage he recorded of Babbitt's shooting death inside the Capitol building.

According to records filed in federal court, the founder of Utah-based extremist group Insurgence USA, who is also facing criminal charges by federal authorities for his alleged involvement in the Capitol Hill riot, was awarded $70,000 total from the major corporations. Prosecutors allege that Sullivan embedded himself among the mob to incite violence, according to recorded examples of Sullivan agitating the crowd. Federal authorities have since seized thousands from Sullivan.