"Attacking a core American institution like the Supreme Court from the world stage is below the dignity of the President," McConnell wrote in a press release. 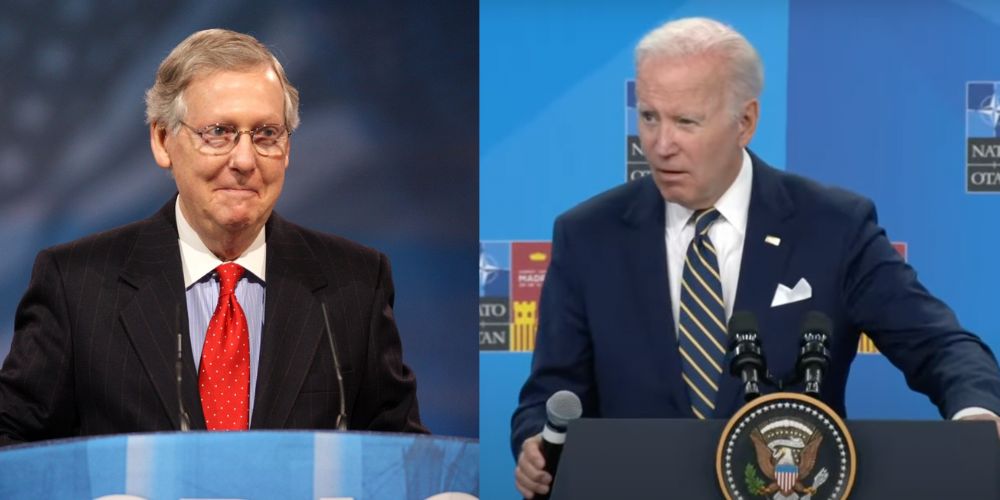 Senate Republican Leader Mitch McConnell responded today to President Biden's call to end the filibuster in the Senate in order to pass federal pro-abortion legislation, and for his comments attacking the Supreme Court on the world stage at the NATO Leaders Summit.

"Attacking a core American institution like the Supreme Court from the world stage is below the dignity of the President," McConnell wrote in a press release.

Following a question from a reporter in regards to polling stating that 85 percent of the US public believes that the country is going in the wrong direction, or even backwards, Biden said, "they do not think that, you haven’t found one person, one world leader to say America is going backwards."

"We have the strongest economy in the world, our inflation rates are lower than other nations in the world," Biden added. "But one thing that has been destabilizing is the outrageous behavior of the Supreme Court of the United States, on overruling not only Roe v Wade, but essentially challenging the right to privacy."

Biden continued on to say that the Supreme Court’s decision was a "mistake," and that he understands why the American people are frustrated, both because of the decision, and because of ongoing inflation woes.

Biden vowed to take action on the issue at a NATO Leaders Summit in Madrid and said "The most important thing to be clear about is, we have to change — I believe we have to codify Roe v Wade in the law, and the way to do that is to make sure that Congress votes to do that."

McConnell said "President Biden’s attacks on the Court are unmerited and dangerous" invoking a recent assassination attempt on Justice Brett Kavanaugh amidst protests and increasingly hostile rhetoric around the court.

Biden's push for new pro-abortion legislation comes on the back of overturning Roe and sending abortion regulation back to the state.

McConnell noted that Biden is "upset that the Court said the people, through their elected representatives, will have a say on abortion policy. That does not destabilize democracy – it affirms it."

McConnell described Biden's comments regarding the Supreme Court as one "that undermines equal justice and the rule of law."

"The President launched this inappropriate attack when he was asked about whether or not we are on the right track as a country. The President needs to take a look in the mirror."

McConnell concluded, "The Supreme Court isn’t responsible for inflation, high gas prices, crime in the streets or chaos at the border. He is. No amount of blame shifting on the global stage will change that.”

Biden's current position may be another filibuster flip-flop, but is likely irrelevant as Democrat Senators Joe Manchin and Kyrsten Sinema have been vocal in saying they wouldn't break the rule.