While most sane Americans wished the ill 73-year-old well, those among the unhinged left wished death upon the black Supreme Court justice. 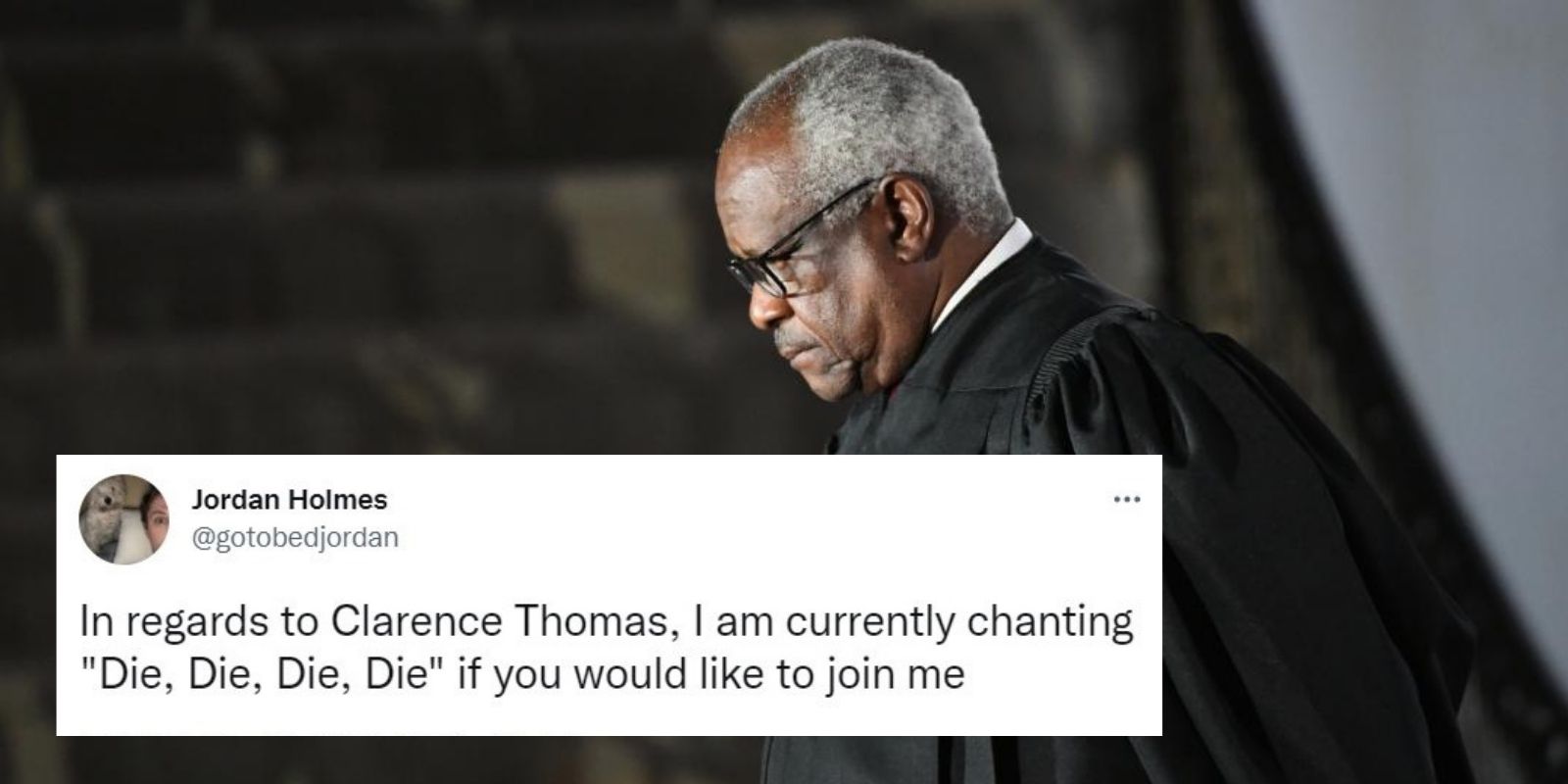 Following news over the weekend that Supreme Court Justice Thomas was hospitalized Friday with an infection after experiencing flu-like symptoms, deranged blue check marks on Twitter and other unhinged liberals wished harm—to the unconscionable extreme of death—upon the ill 73-year-old on the mend.

Twitter-verified writer Adam Brinklow, whose bylines have appeared in SFGate and San Francisco Magazine, reacted:"> "I sure hope a certain thing happens."

ESPN Las Vegas contributor Exavier Pope replied"> to the ABC News article with a GIF of actor Jason Momoa unfolding a spectator chair, which has turned into the "Dis Gon B Gud" meme. If anyone doubts Pope is rooting from the left's sidelines, he called"> the pro-medical freedom People's Convoy "a white supremacist rally."

Barbadoro then shamelessly plugged the date and times of her next shows.

"[U]pon further reflection of this tweet i would like to make a correction..... probably dont come to both of those shows bc ill likely be doing most of the same jokes at both. otherwise everything else i stand by," she wrote in a follow-up tweet.

Knowledge First co-host Jordan Holmes, another comedian whose latest joke is calling for Thomas's demise, tweeted: "In regards to Clarence Thomas, I am currently chanting 'Die, Die, Die, Die' if you would like to join me."

The hate spread to TikTok where influencers such as social media personality "OGoftheHRC," a fervent supporter of ex-presidential candidate Hillary Rodham Clinton, expressed "sinful thoughts" over Thomas's admittance to Sibley Memorial Hospital. "I mean I know I'm not alone, right?" the TikToker asked in a video. "We all were like, 'Is karma doing its thing right now?'" she said in the TikTok clip.

Jackson, who fulfills Biden's promise to nominate a black woman to the nation's highest court, has since been defended and hailed by the same blood-lusting Twitter personalities now elated to see Thomas hospital bed-ridden.

These are, of course, the same ghouls who celebrated the death of former Republican presidential candidate Herman Cain to score political points against former President Donald Trump, pouncing at the opportunity to politicize the tragedy.

In another shocking display of inhumanity in recent years, the left-wing psychopaths also cheered for the August 2020 death of Trump's brother Robert Trump, although some were disheartened it was the "#WrongTrump" who died.

A death of an associate justice on the Supreme Court would mean another vacancy for Biden to fill. Jackson's nomination intends to replace the empty seat left behind by retiring Justice Stephen Breyer, whose departure was announced in January.

Thomas is the second oldest SCOTUS justice after 83-year-old Breyer.