Canada has become the church-burning centre of the western world

In just a few short weeks, Canada has become the church burning centre of the western world. Even more saddening, nobody seems to care. 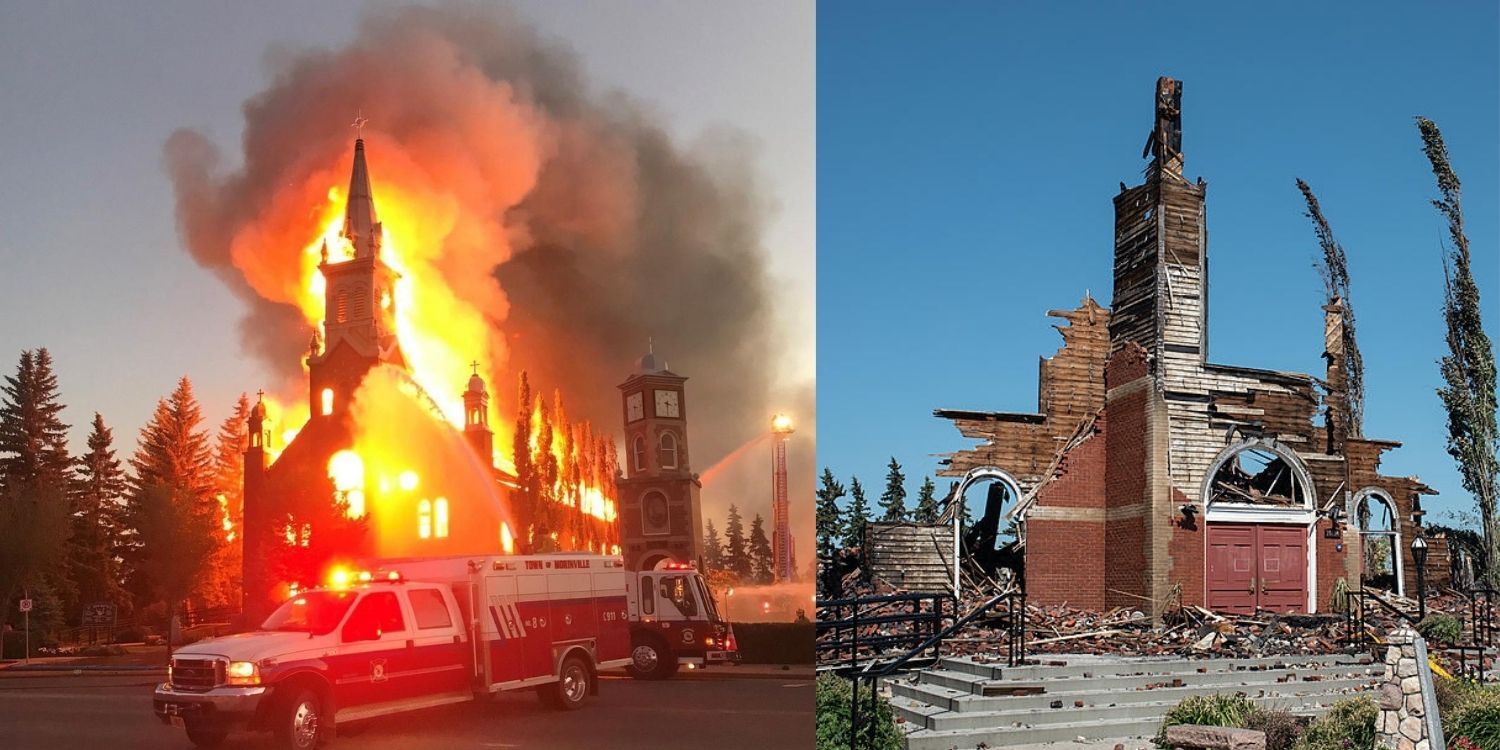 A shocking and unchallenged new reality has taken hold in Canada. Early on Sunday evening, a church was set on fire in southeast Calgary, but this terror is quickly becoming second-page news in this country. In fact, for the past week, several churches in Canada have been burned to the ground and countless have been vandalized.

There are currently no suspects for these arsons, but even more alarming, there is seemingly very little sympathy or care given to this vicious form of religious persecution. The lack of respect among the largely secular Canadian society is not exclusively due to an inherent distaste in Christianity, but rather a broader story surrounding the discovery of unmarked graves on Indigenous Residential Schools.

On May 27, 2021, unmarked graves of what is believed to be the remains of 215 Indigenous children were found on the grounds of a former Residential School in Kamloops, B.C. The discovery was made using ground-penetrating radar technology and while Residential Schools are conventionally understood to have been abusive, the discovery shocked the Canadian public.

It remains unconfirmed how the children died. Some speculate Terbuculosis to be the cause of death as it was common at the time and the school throughout its history has been famous for its poor conditions. This uncomfortable piece of history is not unique to the Kamloops Residential School, however. Following this discovery, further investigations have been made in other Residential Schools.

Soon after the initial discovery, 751 unmarked graves were discovered at a rural Saskatchewan Residential School. This is the dark reality of Residential Schools, which served as centres for assimilation. Incredibly, despite growing public concern from the 1960s onward, Canada's last residential school didn't close until 1996.

These disturbing discoveries inflamed racial tensions in Canada and have led to mass protests. These protests have led to the destruction of several statues, including those of Sir John A. MacDonald who served as the first Prime Minister in Canada. Perceived by activists as the “father of Residential Schools,” his statues were removed in Charlottetown and even in his home town of Kingston. This is despite the fact that Residential Schools existed prior to MacDonald.

Just this week, protestors in Winnipeg also tore down a statue of Queen Victoria and Queen Elizabeth II due to their positions as evil colonizers. While the public spectacle of violence has taken aback some Canadians, these statues were torn down in broad daylight with no opposition or prosecution by the authorities.

In fact, tearing down these statues has proven to be fruitful for these activists. In seemingly every case, the municipality or powers at be have no intention of replacing the monuments. Additionally, the Residential School discovery led to several Canadian cities cancelling Canada Day, as it perpetuates and celebrates an evil colonial state.

The shameless politicization of a tragedy is nothing new for modern leftists. It happens in the United States, just as it happens in Canada. What is unheard of, however, is the sudden and violent destruction of countless churches. In fact, no other western country has seen as much anti-Christian violence as Canada has in this past week.

On June 21, two Catholic churches in British Columbia were burned to the ground. The 110-year-old Sacred Heart Church was burned down at around 1:30 AM on the Penticton Reserve. Built in 1910, the church is now reduced to ash and rubble. Another fire occurred at St. Gregory Church in Oliver at 3 AM. Local authorities deemed the timing “pretty coincidental.”

This arson spelt the fiery beginning of a pattern that would see several churches reduced to rubble. On June 27, two more Catholic churches were burned to the ground in British Columbia. Similar to the first case, they were set on fire almost simultaneously. Later in the day, a fifth church was set on fire but was saved before total destruction.

To describe this week as tragic for Christians would be an understatement. Sadly, it gets worse. On June 30, the large and historic St. Jean Baptiste Catholic Church was burned to the ground. Unlike previous churches, this was in Edmonton, Alberta and in a reasonably populated area.

At this point, there are still no suspects for any of these cases. It is assumed by some that these arsons are a violent reprisal by various Indigenous individuals in response to the recent Residential School discoveries. A retaliation against the Catholic Church for their part in the Residential School system. Ironically, some of the destroyed churches were not even Catholic. Not that it matters.

Even more ironically, the only suspects we do know of are two white women who recently vandalized a Catholic church in a Vancouver suburb. A video of the yoga pants-wearing suspects depicts them covering the building in orange paint, which signifies their rebellion towards white colonialism. This is even though the church they vandalized is primarily made up of a Filipino congregation.

This cognitive dissonance is echoed in the most recent church to perish, a small Vietnamese congregation. Pastor Thai Nguyen, a Vietnamese refugee who fled to Canada for safety, now feels Vietnam may be safer for Christians. "We are refugees with no means. We escaped from Vietnam to come here to get more freedom, to live and we think it was a good country, and now it happened to our church," he said in an interview.

He also made a sobering conclusion, "Maybe it is not safe to be [Christian] here in Canada compared to Vietnam."

In truth, it is untenable to list every vandalized church in Canada this week. There are simply too many cases to count, and the point becomes desensitized. In Calgary, ten churches were vandalized all on a single day, Canada Day.

The Overton window continues to swiftly adjust itself in the zeitgeist. What many of us believe to be a worthy hill to die on and a bipartisan one has now turned into a "tricky issue." Are you pro-church burning or against? This is the current absurdity of the Canadian public. This to be expected when the prime minister says he “understands” the anger around the Residential Schools.

It is now reported that Totem Poles have been likewise vandalized in retaliation to the current crusade against statues and churches. It is no hyperbole to state Canada is a country in disarray. A deeply divided nation, turning on its foundations and fragmenting into regionalist groups. Popular media has much to say about the divisiveness of America, but it would seem a blind eye is being turned to Canada.

Is this what reconciliation looks like? Survivors of the Residential School system don't seem to think so. They have denounced this abhorrent violence and yet, in just a few short weeks, Canada has become the church-burning centre of the western world. Even more saddening, nobody seems to care.